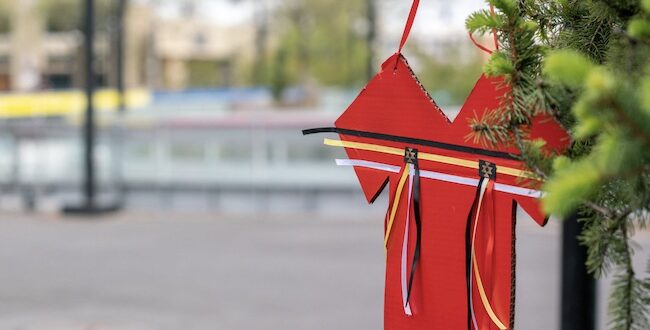 Where We Gather is a project to tell the stories of our many spiritual practices in the Pacific Northwest through words and pictures. Any group that would like to be part of the project can contact Rev. Gen Heywood at genheywood@att.net.

A marker stands at the top of the stairs and plaza next to Spokane City Hall that reads “Spokane Tribal Gathering Place“  with words in Salish that were translated  as “A place where salmon are prepared.” This ancestral land of the Spokane people was a gathering place for thousands of years (see https://www.spokaneriverkeeper.org/history-1). It remains a place of gathering.

When people of many indigenous nations gathered in this place for the spiritual and physical act of preparing the salmon, they traded goods and stories. That sharing of stories continued as a sacred act on May 5 when the accounts of the Missing and Murdered Indigenous People were told through pain and tears. (Up to date information at http://www.missingandmurderedindigenouswomenwashington.org).

The gathering opened with prayerful drumming and song. Tanisha Rattler spoke about how she had created this song two years ago for a documentary, “Somebody’s Daughter.” Drea Rose, a co-organizer of the event gave the rare permission to film and record this sacred moment saying that recording it will help keep the traditions alive.

Drea Rose and Twa-le Abrahamson-Swan were co-directors following the instructions of the main organizers, Jenny Slagle of Native American Alliance for Policy and Action (TNAAPA) and Idella King. Twa-le described how Slagle and King gave direction “in all aspects of our organizing to ensure that everything we do is in a respectful way to the impacted families.” Slagle’s family is among those in close contact with this struggle as two of her sisters were among the murdered.

Abrahamson-Swan spoke to the crowd about what they would experience on the Awareness Walk route. They would pass the metal running statues that were dressed in red and had images of the murdered indigenous people on them. She drew attention to how the cracks in the concrete near City Hall had been painted red to recognize all who had fallen through the cracks and that the walk would end at the pavilion where the images of the missing lined the way.

Coeur d’Alene Tribal Council member, CarylDene spoke about the systemic forces of colonization, genocide, domestic violence, as well as the generational grief and trauma. She spoke of the devaluing of native women due to colonialism and media, especially movies, that sexualized native women.  She said missing and murdered woman and domestic violence have been ignored. She shared the very personal story of her great grandmother, Rosie Garrick, who went missing after a party and was found murdered in a field. It was not just another unsolved case. She said, “We don’t just die, we don’t just disappear.” She urged that all present must push for a central data base.

Jeannie Louie, a board member of the Affliated Tribes of the Northwest Indians, reminded all they were on the aboriginal territory of the Spokane and Coeur d’Alene. She spoke about the importance to teach each other how to take care of food, families, traditions, and the Earth. She cautioned against trusting anyone and the importance of helping those who are grieving. She repeated the call for a national data base to help find the missing and murdered indigenous people.

Dixie Stensgar of the Coeur d’Alene described her grief for those murdered by law enforcement. She spoke of her nephew Eagle Michael and her concern for all the families who grieve their lost loved ones.

Beanie Alexander of the Coeur d’Alene also spoke of her nephew, Eagle Michael, who was deaf. At 15 years old, he was shot in the back of the head by Spokane police because he did not comply with the officers’ order to get on the ground. He could not hear the order. The newspaper at the time said that Eagle Michael was carrying a BB gun. Beanie Alexander said that he was carrying beer. Beanie Alexander spoke of the guilt, shame, doubt, unworthiness, anxiety, and fear of punishment that comes with this trauma.

The Awareness Walk passed the “Joy of Running Together” statues dressed in red with images of the murdered on them. Along the way, miniature red dresses and skirts hung from the trees as another reminder of the many unnamed  missing and murdered.

During the walk to the Pavilion, co-organizer Drea Rose prayerfully smudged the way and the participants. This sacred practice continued through the painful testimonies at the Pavilion.

Upon arrival at the Pavilion, the City of Spokane’s declaration of May 5 as Missing and Murdered Indigenous Women and Girls Awareness Day was read.

Tiger Peone, Spokane Tribal Council Board member, gave thanks Spokane City Councilor Betsy Wilkerson and her staff for supporting this day and making it possible. He told the crowd that they must get out and talk with other people. He encouraged everyone to keep raising awareness and  keeping each other safe.

Twenty-year-old, Eastern Washington University student, Beverly Abrahamson who grew up on the reservation told her story of experiencing violence toward native women. She recalled how cultural differences stand in the way of native women getting help, the problems with tribal police, and how victim shaming keeps women silent. She and her brother started an organization to help women and girls get out of violent situation. She encouraged victims to learn self defense and for everyone to be involved with organizations that prevent and deal with violence.

The gathering continued into the night with drumming, blanket  gifts, and testimonies. As the sun light faded, Spokane lit up in red continuing the message of awareness about Missing and Murdered Indigenous People.