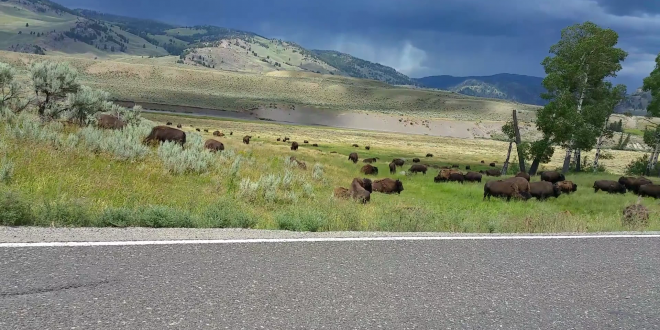 Where the Buffalo Roam

How often do we pass through life not knowing how we got here? All the while playing in and influencing our minds are the multitude of things that, upon our passing, will not have made any impact at all on our human condition.

We are stewards of the earth and helpers of our fellow man. It’s true–we still live in Eden, for it is but one decision away.

As we cast off the cloak of our blindness, we will see the beauty and abundance that has always been here.

To be mislead concerning our birth right is one thing, but to persist in an impoverished condition by choice of thought is, in fact, delusional.

Therefore let us heed the guidance of Isaiah 58:6 wherein he states, “Is not this the fast I have chosen: to loose the chains of injustice and untie the cords of the yoke, and set the oppressed free and break every yoke?”

We as a humanity were born under the yoke of imposed lack and scarcity not ordained by the creator. We as the Light of the world can, will and do see a new way.

Charles R. Vaden was born in Las Vegas, Nevada back when it was a sleepy dusty desert town. After a six year stint in the Marine Corps where he earned the rank of Staff Sargent and served as an Aircrew Survival Instructor during the Vietnam war training pilots how to survive in adverse conditions should they be forced down. Afterward he earned a degree in sociology and minor in psychology and while in school formed the first "Futurist" club, hosted a radio show on KUNV and supported a colleague in the development of a "Solar Powered Lighter-than Airship. "After graduation he spent 15 years in the field of counseling working in adolescent psychiatric, adult drug and alcohol and behavior problem youth at the now internationally renowned Turn-About Ranch in Southern Utah as recommended by Dr. Phil. Vaden is currently developing the interactive matrix of "Star System 5" a tool using Structural Sociology applied to the Kingdom of God on earth so as to develop a working social construct to bring about the social psychology necessary for implementation of the Kingdom.