What do you do when your miracle child disappears…and you weren’t paying attention? 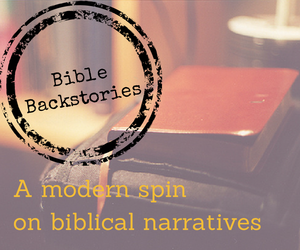 Yesterday, it took us all day to travel from Jerusalem to our camp. Today, the three of us walked back to the city in just over seven hours. Dina rode in the cart the whole way and stopped asking “why?” every five minutes fairly early in the day. Even a 3-year-old can tell when to be silent. I stared into the rocks and the scrubby bushes, looking for his mangled body. I asked every respectable traveler if they’d seen Yeshua on the road. Yossef even stopped a cluster of Roman soldiers coming from the west and asked if they’d seen his son. The captain pulled his cloak up around him and urged the horses on, nearly trampling Yossef. He was lucky he didn’t get whipped.

The real fear clutched at my heart when I saw the gates of the city. How would we ever find our son? Then, the fear traveled deeper. I had lost the miraculous son given to me by Bright Lights because I wasn’t paying attention. I felt I was dropping into Sheol.

Yossef was standing over me, and I was sitting on the curb at the side of the road.

“We’ll never find him. Never, never, never, and it’s all my fault and Bright Lights will hate me forever.”

He lifted me up and held me. “Our baby will not be lost because you were distracted. Trust Yahweh, my dear. Trust him. Now, you go on to Elizabeth’s with the wagon and Dina. Maybe Johanan did come into the city and find Yeshua. She will know. You wait there. I’m going into the Temple. If I can’t find word of him, then I will at least stand in prayer before Yahweh.”

I nodded, took the donkey’s bit, and led the cart down the winding streets to Zechariah’s grandson’s house. He had taken Elizabeth in. His wife looked after her, somewhat unwillingly, but Elizabeth had food and a clean bed. I knew Johanan wouldn’t be there. But I couldn’t even peer into the alleys for my son any more. It was up to Yossef. And his Yahweh. My Bright Lights had gone dark.

The sun dropped below the city, and Dina and I went into Elizabeth’s little apartment. Rachel brought in some food and I fed Elizabeth and Dina. Maybe, I thought, we would just live here until Elizabeth died or Dina became a woman.

The servants were lighting the torches on the porch when the door was flung back and a disheveled and very contrite boy stood in front of me. He was almost as tall as Yossef. Was this really my Yeshua? Then his arms were around me and it was my Yeshua. There were many tears from me and from him.

“Where was he?” I asked Yossef.

“Solomon’s Porch. Deeply involved in what sounded like an argument with five Sadducees and a couple Pharisees who weren’t talking. Just smirking as they leaned against the wall.”

“Mother, they insisted that there was no resurrection of the dead! I couldn’t believe that they had no place for talking about what other scholars have written. And one guy, named Gamaliel, I think, really wanted Father to enroll me in his school—even when I told him we were from Galilee.

“But the saddest part was hearing how empty their talk was about Yahweh. As if he were just an idea—from a long time ago—and that the only thing that mattered was Torah. Which, I know, really matters. But to leave Yahweh out—as if he’d been blown away by the wind. It made me feel old.”

He knew nothing from feeling old.

We slept that night in an empty room next to Elizabeth and left for home the next morning—before she’d awakened. I don’t think she’ll even remember we were there. We met the rest of our families on the east bank of the Jordan and saw the gate of our little home in Nazareth a week later. As glad as I am to have Yeshua snoring in his own bed, I have an icy arrow in my heart that doesn’t melt. Ever.

Answers to prayer do not necessarily return our hearts to innocence, do they?

Previous Guilty until Proven Innocent: The Exonerated comes to Gonzaga
Next If you were Brittany Maynard, what would you do?