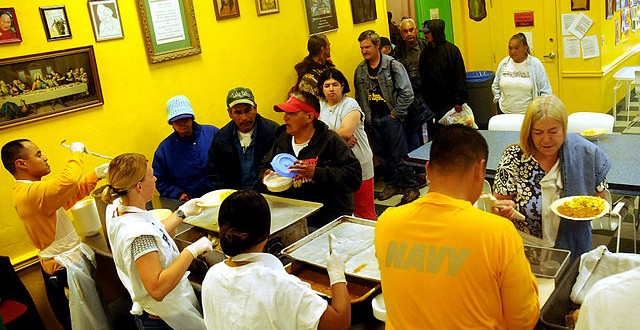 Where is the charity when it’s needed the most?

Two days before Christmas I was part of a regularly scheduled crew getting ready to feed the needy at a local soup kitchen when we got a call asking if we could use some food donations. Sure, bring ’em over.

One of the donations was brought in by a man and two friends who carried in three trays of hot food — stuffed chicken breasts in a marsala gravy, plus a tray of roasted vegetables and another tray of rice. It was hot and ready to eat. I have no idea whether it was donated by a restaurant or a generous customer but I didn’t care.

We are always grateful for such donations but there’s only so much food we can use at one time. The boxes and bags of canned and dry foods were brought downstairs to the basement storage area. The fresh food, mostly produce, was refrigerated.

Those three trays of hot food were shoved into the already stuffed ovens to stay warm alongside all the food that had already been prepared and delivered by a group of church volunteers who do so every fourth Tuesday. By the time the last of our guests had departed there was plenty of food left over — including half that tray of stuffed chicken breasts.

This is the way it is every Christmas, and every Thanksgiving. Food, hot and cold, comes flooding in for a week or two before each holiday. We get trays of catered desserts and containers of sealed hot and cold food left over from office parties. We get boxes of homemade cookies, cupcakes and cake loaves donated by elementary school classes, along with festively decorated bags filled with sandwiches, fruit and desserts for the guests to take with them. Employers give us great quantities of food donated by their employees. I remember one year on the Tuesday before Thanksgiving when we got five fully-cooked turkeys and four frozen turkeys in less than two hours, all of it unanticipated.

During the holidays our guests eat extremely well (frankly, better than I eat at home). But starting in mid-January, the storehouse of food begins to shrink until, by late summer and early fall, the meal is often boxed pasta covered with jarred sauce, both of which seem to be a staple of those who give small amounts of food to us from time to time. I remember one occasion when I had to fetch three dozen cans of corn to be heated and served as the starch for a day’s meal, leaving almost no corn on those shelves.

As soup kitchens go, ours is one of the most blessed because many churches supply a meal every month on a set schedule. There always seems to be just enough food, even in the barest of times, to feed our clientele, although, at times, we must dip into the kitchen’s cash reserves and go to a local food distributor to buy 100 pounds of ground beef for sloppy Joe’s.

I/we never cease to thank God for the donations. But I wish donors would realize that: (a) there is only so much food we can serve around the holidays; and (b) the poor are hungry every day of the year.

If you want to donate call the soup kitchen beforehand to ask what’s needed and when it’s needed. Health regulations vary from state to state and some states prohibit donating fresh-cooked food, regardless of the source.

Consider giving from May through October, when shelves are particularly bare. Think about giving ten of one thing, rather than one can or package of ten things, because ten of one thing gets us closer to a quantity that we can serve. Remember those three dozen cans of corn that went out for just one meal.

If you decide to organize a food drive, do it at a time other than a holiday. If you organize a crew of church volunteers to cook and deliver a meal, give them a set recipe to follow so that every tray of food is exactly the same, and make sure the soup kitchen knows it’s coming before you start cooking.

If you decide to donate from an oversupply in your home, check the expiration dates first. We have thrown out a lot of cans and packages that expired years before.

Lastly, even if you don’t get a formal thank-you, remember that the needy thank you every time they put that food in their mouths.