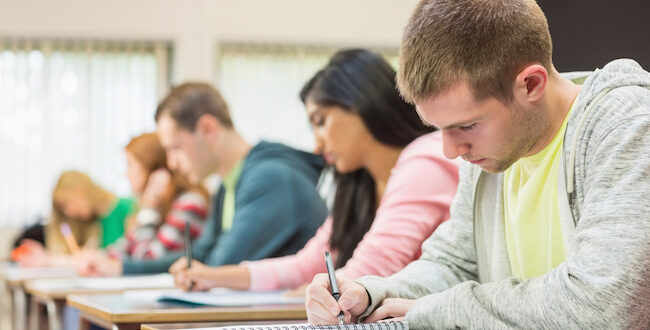 A group of young students writing notes in the classroom/DepositPhoto

In the previous segment, following my stem cell transplant to treat my cancer, at the depth of this healing rite of passage, at a liminal state, I described a “crystalline experience,” a sensation of “profound empathy” I had for my fellow cancer patients, and offered my “gratitude” to an unwelcomed difference that made all the difference.

The stories of the intersection of diversity and commonality, of empathy and intentional engagement traveled with me into the academy as an ethnographer. As a faculty member, with occasional administrative roles, I first taught and researched at the University of Montana (1979-80, as a sabbatical replaced for the revered religious studies scholar Joseph Epes Brown), then Carroll College in Montana (1980-86), Lewis-Clark State College in Idaho (1987-98), and finally at the University of Idaho (since 1998).  The Wheel’s sensitivities and capacities served me well in the classroom as I engaged my undergraduate and graduate students, planting seeds of spokes and hub, seeds to be nurtured with empathy.  The Wheel’s sensitivities and capacities served me well as I engaged perfect strangers, while conducting applied, collaborative, ethnographic research projects with the peoples of the Coeur d’Alene, Crow, Flathead, Nez Perce, Spokane, and Warm Springs Tribes. These were projects that ranged from the cultural impacts determined as part a Natural Resource Damage Assessment of the mining activities in a traditional Indian homeland, to Native perspectives on Lewis and Clark’s Corps of Discovery and the forces of assimilation they brought, to developing an Indian language arts curriculum for a non-native school district, to identifying the nature of and applying Indigenous knowledge in helping address climate change.  Each of these varied projects demonstrated the power of story, of the act of re-telling the sacred narratives, what the Apsáalooke call, baaéechichiwaau and Schitsu’umsh, ‘me’y’mi’y’m. Stories such as those of Coyote or Salmon, of Chief Child of the Yellowroot or Burnt Face. Stories at the heart of each of these Indigenous communities, since time immemorial. Stories at the nexus of not only withstanding the hegemonic winds of the dominate society but of providing the adaptative, pliable fibers assuring cultural renewal and persistence into the future. In these differing research collaborations, the empathy of the spokes and hub allowed me to travel together with those who sought to apply their voices and re-tell their stories, stories that inevitably sought a healing in the earth and with humanity.

It is interesting to note that my first ethnographic research project, during the summer of 1974, sought to aid in the delivery of health care. On the Crow Reservation, the government’s Indian Health Service physicians, though well trained in the latest advances in medicine, often had difficulty in understanding and communicating with their patients, particularly the older, more “traditional” Apsáalooke.  I worked with elders, key among them Tom and Susie Yellowtail, and we put together an introduction to Apsáalooke concepts and perspectives on illness and healing. With such knowledge in hand, it was hoped the physicians could better work with and deliver health care to their Crow patients, hoped that when they walked the halls of their hospital, they could better jumpstart relationships with perfect strangers.

Following my cancer journeys, in the summer of 2010, I was asked to serve on the University of Idaho’s General Education Steering Committee. We were to review and redesign the core curriculum required of all of the university’s undergraduates, representing about a third of their total course work, distinct from their courses in their major. With its noble intentions, general education typically entails broad learning in the liberal arts and sciences, building skills in communications, in analytical and creative thinking, and in problem solving, for life-long intellectual and aesthetic, civic and ethical, real-world engagement. And I ponder, is this not an education applicable beyond the academy, to the general public, its intentions important to all of us?

While serving on the steering committee, I helped initiate new course requirements in American diversity and assisted in refining the nature of the “integrative learning,” which took the form of the Integrative Seminars – ISEM 101, ISEM 301 and the Senior Experience. Both diversity and integrative learning are pivotal components in a general education curriculum. The following summer, in 2011, I chaired the subcommittee that developed the specifics for these seminars. Among other objectives, these seminars were to apply the university’s Learning Outcomes and use multiple disciplines and perspectives, such as the humanities and social sciences, to explore a single topic, selected by the instructor, of contemporary relevance.

Over the years, I had the opportunity to repeatedly teach each of the three types of seminars. All were favorites, though the ISEM 101 holds a special place. Entitled “the Sacred Journey,” it provided an introduction to four of the world’s religious traditions – Native American, Hindu, Buddhist and Taoist – while attempting to address the Learning Outcomes within its designed pedagogical structures. I asked my students, at the core of each of these four distinct religious configurations, were they not each in approximation with the others, and together archetypal of something grander?  And I asked, how did they align, in spokes and hub, with their own tradition, their own unfolding story? In the questions asked of my students, there were no correct or incorrect answers sought. Rather, there was serious reflective engagement expected.

In 2011-12 I was awarded the College of Letters, Arts and Social Sciences’ Distinguished Humanities Professorship.  Having choice of topic, I elected to explore the intersectionality of diversity and shared experiences in the academic landscape. With generous funding I sponsored a year-long series entitled, “The Turning of the Wheel: The Interplay between the Unique and the Universal.” The series brought together university students and faculty, along with community members from a variety of disciplines, such as the arts, literature, theatre, law, the sciences, and social sciences, asking them all, how and in what ways were the intersection of the unique and ubiquitous expressed in their discipline, and what were their implications.  It included twenty-three colloquium talks, four dramatic performances, an art exhibit, and four interactive discussion panels.  The series was a rewarding exploration, for participants, audiences and me, with many unexpected connections.  See: http://www.lib.uidaho.edu/digital/turning/index.html.

Part six of this series will run Feb. 18.

Rodney Frey remains affiliated with the University of Idaho, as Professor Emeritus in Ethnography, while continuing his involvement in his local church and hospital. He’s been with the university since 1998. Parts of this series were inspired by previously published materials he authored in “World of the Crow: As Driftwood Lodges” (University of Oklahoma Press 1987) and in “Carry Forth the Stories: An Ethnographer’s Journey into Native Oral Tradition” (Washington State University Press 2017), and with Tom Yellowtail and Cliff SiJohn in “If All These Great Stories Were Told, Great Stories Will Come” in Religion and Healing in Native North America, edited by Suzanne Crawford and Dennis Kelly (ABC-CLIO 2005). Core elements of this personal series appeared in a sermon he gave at the Unitarian Universalist Church of the Palouse, in Moscow, Idaho, on the 16th of June 2019.

Previous When we walk the halls of a hospital – An Integrative Personal Story, Part 4
Next Ask An Atheist: A Loving God?