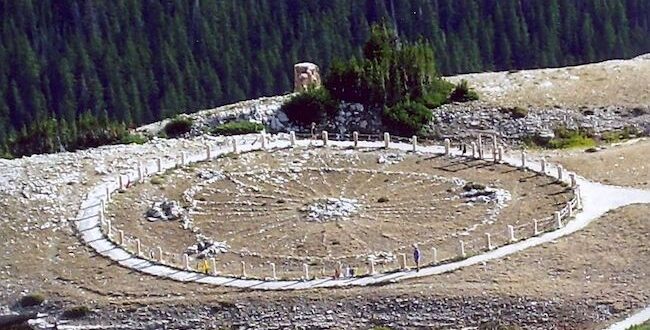 When we walk the halls of a hospital – An Integrative Personal Story, Part 2

In the previous segment, I started by asking the question, what are the qualities and capacities that help bring about a meaningful relationship with a perfect stranger?  I then explored my initial encounters with Tom and Susie Yellowtail, of the Apsáalooke or Crow Indians of Montana, as they began sharing insights into their Ashkísshe Sundance Way of Life .

Tom and Susie introduced me to the Wheel, a Way of Life, by which they and so many others lived their lives.  Imagine the sight seen from an Eagle’s eye, while flying high over the Bighorn Mountains of Wyoming, looking down upon the ancient Medicine Wheel.  Seen are 28 rock spokes radiating out from its rock cairn center, enclosed within a circular rim some 80 feet in diameter.  It was a young Apsáalooke named Burnt Face who during a ritual fast placed these small boulders in alignment, as an offering to the Sun or to whomever might listen to his prayers.  His sacrifice was responded to most meaningfully.  Today, pilgrimages to the Wheel continue, with “tobacco prayer tie” offerings left beside the rocks.

From the view of the Eagle, flying to the valley below, now look down upon the contemporary structure of the Sundance Lodge and its dancers.   Seen is a huge forked cottonwood tree, the Center Pole.  Cut from its roots just days before, brought to the sacred site and ritually planted in a 4-foot hole as the Song of the Tree was sung, the Center Pole is tightly anchored to the Earth.  Its two soaring forks, left green with leaves, pierce the Sky, one fork flying a blue flag and the other a white flag.  Represented at the Center are “Night” and “Day,” and “Earth” and “Sky,” inclusive of all that is the world.  At the junction of the Tree’s fork, interlaced one on top of the other and extending out, are the tips of 12 lodgepole pines, each left green as well.  Attached to the branchless trunk of the Tree is a mounted head of a Buffalo, facing west, and a mounted Eagle, with outstretched wings, facing east, their spirits ready to listen and give.  Having been stripped of their branches, the pine rafters radiate out some 40 feet from the Center Pole, their butts anchored to smaller forked posts, defining the perimeter of the Lodge.  The entire circular structure is enclosed by cut trees laid upright against its structure, except the door, open to the morning Sun and its possible gifts.  From beneath, aligned with the overhead rafters, the dancers charge the Center Pole and dance back from it to their places against the inner wall of the Lodge, charge again and dance back, charge and dance in step with the beat of the drum and song of the singers. Their vows and prayers are directed at the Center Pole, with eyes focused on a knot on its trunk, or perhaps on the Eagle or the Buffalo, and through them those vows and prayers are received by the Creator.  Heard also are the sounds, “the cries,” in unison with the beat of the drum, coming from the Eagle-bone Whistles, while the Eagle circles above and responds, as does the Creator.  The rock and the tree and the human configurations, each in approximation with the others, together archetypal of the whole.  The Sundance Lodge is called Ashkísshe, “Representative Lodge.”

As Tom explained to me, the world is like the great Wheel, made up of many different spokes.  The spokes are the different traditions of the world, each with their own language, own rituals, own way of life.  Each built upon and expressive of integrity.   While each is distinct and unique, each is equal in importance and worth, none greater than another.  No one spoke should dominate the others, nor should any be eliminated.  Yet all these different spokes radiate from and are anchored to a singular source, the hub.  While the spokes are each specific and defined, the hub is necessarily non-specific, is inclusive, all-encompassing, that which connects all, that is in all, is ubiquitous.  The hub makes all possible, is renewing, is life-giving, is transformative, is what the Apsáalooke call Baaxpée, “Medicine,” coming from the spirit and the material, coming from the heart and the mind and the body, coming from inside and from out, from the Infinite.

While a traditional Sundance healer and elder, Tom also lived a life as a devout Baptist, who knew his Gospels well.  He kept the traditions separate, Sundance songs and Eagle Feathers in the Big Lodge, and Christian hymns and the Bible in the Little Brown Church, never blending or mixing the two in each other’s homes.  Nevertheless, his distinct Sundance songs and Baptist hymns, were heard and answered by the same source.  For Tom, the hub was addressed by the name Akbaatatdía, “the One Who Made Everything,” the Creator, and by the name Jesus Christ, the Savior.  While the words emanate out of the separate spokes, their limitless essence is shared and imbued within the hub.  And then there was Susie, who blew the Eagle-bone Whistle and prayed with Eagle Feathers in hand while in the Sundance Lodge, but also listened with a stethoscope in the other hand while in the hospital.  Susie was one of the first American Indian registered nurses in the country, receiving her medical training in Boston.  Spiritual Sundance and scientific bio-medical healings going hand-in-hand, though like her husband, one in the left hand, the other right.  The differing, distinct paths Susie traveled, the differing spokes, all led to the same ubiquitous, healing source, the hub.   As Tom and Susie traveled with deliberation, sincerity and competency, each spoke aligned equally with the others, each anchored to the hub, the Wheel is in symmetrical balance.  As they did so often, both were accomplished in walking the halls of the Indian Health Service Hospital, or any hospital, and entering the rooms of perfect strangers.  Where Eagle Feathers, Crucifix and stethoscope could be applied with equal hands.

In 1993, just before his passing, Tom was selected to represent all Native Peoples, the first to do so, at the Council for a Parliament of the World’s Religions, meeting in Chicago.  There, at the podium, in full regalia, with Eagle Feathers in hand, before 5,000 people, Tom prayed for world peace.  Next to Tom were priests, rabbis, imams, ministers, monks, among them the Dalai Lama, the many different spokes, all praying in their own languages, in their own ways.  Yet together, as Tom and others would hold, ultimately offering prayers to the same ubiquitous source.   What a sight that must have been!

That summer of 1974, upon first meeting and visiting with Tom, despite the great differences in our backgrounds, perfect strangers, we felt as if we’d known each other all along.  Though I had no idea at the time, so began a mentoring relationship, as a father to a son.  We shared, laughed and occasionally cried together.  A few years later, Tom in prayer, with Eagle Feathers in hand, bestowed on me the name, Maakuuxshiichíilish, “Seeking to Help Others,” and with it came the guidance, the spirit and the responsibilities of an “Indian Name.”  It would be a relationship with Grandpa Tom lasting until his passing some twenty years later, at the age of 90, though his mentoring is still very much alive.

Two years later, in 1976, when I told Tom of Matt’s sudden illness and my pledge, he, without hesitation, offered to help.  Tom prepared me and offered instructions for the ritual fast on an isolated hill.  Three days of prayer and contemplation, under the watch of the Sun and many others, without the distraction of food and water.  Alone, though not really alone.  It was a powerful experience, with three most unexpected events, indeed gifts, received.  When I came down from that hill, we took a Sweat Bath and we prayed and talked together.  Following the Sweat, Tom turned to me and asked if I’d like to join him, to continue my prayers for Matt, blowing the Eagle-bone Whistle in the upcoming Sundance.  So began a most unanticipated journey, a path totally unimagined just a few weeks before, with more precious gifts awaiting, which continues to unfold.

Part three of this series will run Feb. 15.

Help support more FāVS by becoming a member so we can publish more series like this!

Rodney Frey remains affiliated with the University of Idaho, as Professor Emeritus in Ethnography, while continuing his involvement in his local church and hospital. He's been with the university since 1998. Parts of this series were inspired by previously published materials he authored in "World of the Crow: As Driftwood Lodges" (University of Oklahoma Press 1987) and in "Carry Forth the Stories: An Ethnographer’s Journey into Native Oral Tradition" (Washington State University Press 2017), and with Tom Yellowtail and Cliff SiJohn in “If All These Great Stories Were Told, Great Stories Will Come” in Religion and Healing in Native North America, edited by Suzanne Crawford and Dennis Kelly (ABC-CLIO 2005). Core elements of this personal series appeared in a sermon he gave at the Unitarian Universalist Church of the Palouse, in Moscow, Idaho, on the 16th of June 2019.

Previous Finding Community Online
Next When we walk the halls of a hospital – An Integrative Personal Story, Part 3