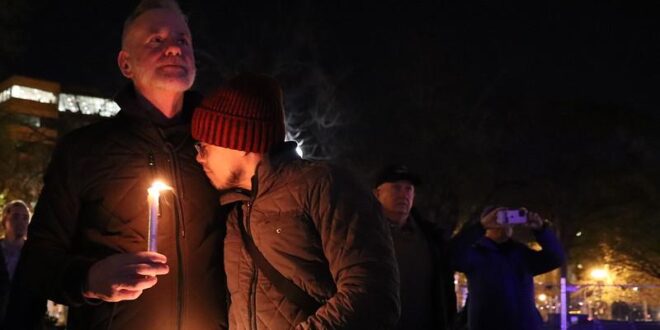 I was asleep, recovering from a late night watching my Oregon Ducks play football.

The bedroom door opened, and my dear Carla came into the room. I was groggy, but she had that look on her face. I was immediately awake.

She sat beside me on the bed.

“It is OK,” she said. “Liss and Caitlin are fine, but there has been a shooting in Colorado Springs.”

There are five or six dead following the late Saturday rampage, she said. They were all patrons at an LGBTQ nightclub. I began to shake.

If you read my columns, you will know a bit about my daughter, Liss.

She lives in Colorado Springs, the city she has called home since grade school. It was in the Springs where she came out as gay, established her high school’s first diversity club, and where she met Caitlin Glessner who became her wife.

She has a high profile in the Springs gay community serving as communications director for Inside Out Youth Services, a nonprofit that serves the area’s gay youth.

And she knows Club Q well.

She and Caitlin are not club people. But in a conservative city like Colorado Springs, the gay bar is a welcoming place, a safe place. She and Caitlin have attended events there before. But they were home Saturday night, entertaining friends.

I was still shaking when we traded messages. She is a voice in the LGBTQ community, so was immediately busy answering calls and handling press inquiries. We were unable to talk until late Sunday.

But when we did, she was still shaken, exhausted, devastated. She knows some of the victims. And in a very real way that her father would prefer to deny, she understands she might have been a victim herself.

Now, I fear that because of her high profile, she has a target on her back. I am not certain I will ever shake that fear after Sunday.

Even with all the progress we have made in this country, I know at some fundamental level that all LGBTQ people remain at risk. But I thought, foolishly, that enough progress had been made that Liss and Caitlin had escaped the worst.

And then a man wearing body armor and wielding an AR-15 walks into a bar and shatters what was clearly a delusion. He now faces five counts of murder. Hate was his motive.

Talking to my daughter Sunday, I played my parental role.

“You must be more careful now,” I said. She could hear me choking back tears.

“I am always careful,” she said.

“I always look for the exits,” she said.

“I am always afraid,” she said.

And there it is. Liss and Caitlin are not safe, not in Colorado Springs, maybe not anywhere. Holding hands in public, exchanging a soft kiss, making the loving gestures I take for granted with Carla, carry risk for Caitlin and Liss. They are always watching, always aware of their surroundings, take nothing for granted.

But to some extent, this last 10 days shows none of us is as safe as we might have believed.

The Colorado Springs massacre was the second time in a week that unimaginable violence shook my world view.

I retired from the University of Idaho more than two years ago and have not been on campus for nearly that long. But I once occupied an apartment around the corner from where four UI students were butchered a week ago Sunday.

And even though I did not know the victims, some of my former students did.

Confidence that tiny, sleepy Moscow, Idaho, might be a safe haven from apocalyptic violence was shattered, just as my illusion of gay safety in the Springs was extinguished.

We know almost nothing about what happened in the early morning hours of Nov. 13 in the Moscow house where the four students were butchered. We do know the murder weapon was a knife. In Colorado Springs we know the weapon was a long rifle, an AR-15, in the hands of a man who had been arrested a year earlier for threatening to kill his mother.

It is a natural thing for people to live with some denial. It makes life easier to manage. So, we read about mass shootings or horrible murders elsewhere and comfort ourselves by believing it is not us, cannot be us.

Sadly, this is the reality – we must all know the exits.