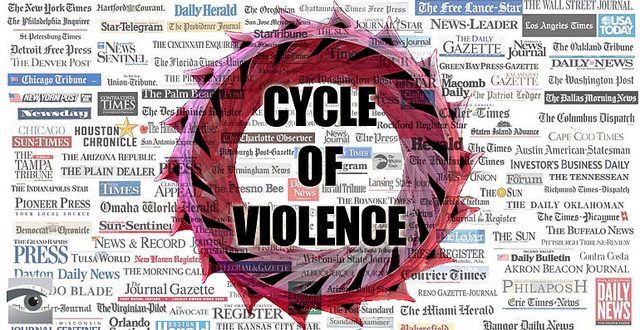 There can be no doubt that the cycle of violence is real. Those who are victims of violence will, if they feel strong enough, take revenge, and more than revenge. This in turn triggers a second round of violence from the first perpetrators–and on it goes indefinitely. We see this at every level of human interaction, from babies stealing each others’ toys to great nations at war.  Pacifism seeks to break the cycle of violence by non-resistance to violence, believing that if enough people refuse to become violent in response to violence the world will become peaceful.
Pacifism is to me a very attractive possibility, one that I believe could be remarkably successful in most cases. But not all. For there exist in this world people whose sense of virtue is distorted enough that they truly believe any crime, any horror, any amount of violence is not merely justified, but is right and proper and holy in the pursuit of their aims. We have seen such people in this world several times in the past 100 years. These people will either cow their own citizens into silent acquiescence or enlist them in their cause.
Pacifism doesn’t work when faced with that sort of evil, for the totalitarians and the terrorists inevitably are convinced that pacifism itself is among the viewpoints that must be destroyed in order to establish their own vision of a perfect world. It is a noble thought to imagine that if we just did it right, pacifism would triumph over terrorism and totalitarianism, but human nature is such that there is no way to “just do it right.”  The criminality of these systems originates in an appeal to high ideals; they truly believe that the cause is holy, just, good, and that it is therefore holy, just and good to rid the world of those who disagree, or those who are not the proper sort of people.
There will always be people who can be convinced of the virtue of the most horrific ideologies, and who therefore can be recruited to participate in genocidal campaigns. Pacifism cannot overcome that, because pacifism cannot overcome human nature itself, and the need humans have to want what their leaders want, to believe what their leaders believe, and therefore to do what their leaders tell them to do. I really want to be a pacifist, but there are moments in history when, in my view, pacifism represents the abnegation of responsibility to defeat the kind of evil that uses the loftiest moral language to justify the worst sort of criminality.
War is never truly necessary, never, but sometimes it is rendered inevitable by the greed, blunders and hubris of humanity. So when we go to war, when we are forced to fight violence with violence, we must realize that we are not ending violence itself, we are perpetuating it. We must realize as well that meeting violence with violence does not represent the triumph of righteousness, but the failure of humanity to be righteous. When we go to war, therefore, we must do it with deepest sort of humility, and refuse to dehumanize those whose ideology requires them to dehumanize us.
For then it becomes possible, once the fighting is done, to seek genuine reconciliation, rather than revenge, and thus to lessen the damage the cycle of violence imposes on the human spirit.