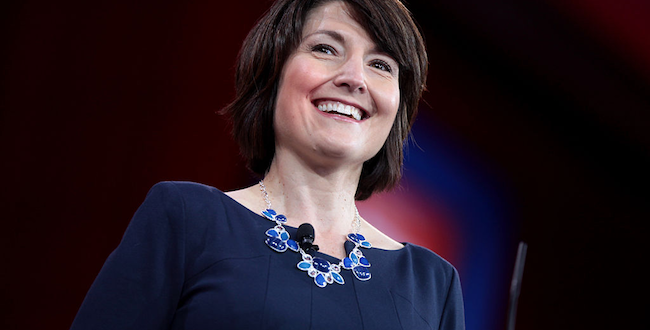 When Nietzsche Rides the Service Elevator Too: Reflecting on Cathy McMorris-Rodgers’ MLK Speech

“Being nationalistic in the sense in which it is now demanded  by public opinion would, it seems to me, be for us who are more spiritual not mere insipidity but dishonesty, a deliberate deadening of our better will and conscience.”
— Nietzsche, Unpublished Note

Elevators, like the well from which Jesus drew water with the Samaritan woman, are compelling venues for conversation. Don’t you think? And yet, before waxing on about the latest and greatest technology for ascending and descending the social spectrum, I find myself preoccupied with another gathering, one that took place at the Spokane Convention Center on Monday, Jan. 16. If you were there you heard, among many prominent speakers, the duly-elected representative from Eastern Washington, Cathy McMorris-Rodgers, refer to a man she had met in a Washington D.C. elevator, a man who greeted her with three simple words: “God is good!” And then, you heard a rapid-fire montage of syllables like “Unity” and “how as a nation, we can heal” – not to mention that catchy acronym with which the Congresswoman allegedly soothes the collective conscience of her staff, back at the Capitol Building. “SERVE,” she enunciated, stands for:

But now, I must admit something that perhaps Freda Gandy, the executive director of the Martin Luther King Jr. Family Outreach Center, failed to appreciate. Something had been brewing amid the throng of those inspired by Dr. King’s vision for non-violent cultural transformation. My admission is that, although I personally did not boo my representative, I did want her to hear my discontent as well as my impatience with her rhetorical fluff. And so, “Save Our Health Care” rang out, and bounced around the walls of Exhibit Hall B on January 16, 2017, and I’m hopeful at least one elected official heard it.

The elevator where McMorris-Rodgers encountered her “God is Good” might as well be the marketplace through which Zarathustra ventured the news, “God is Dead.” Don’t misunderstand me here. What I believe is that Christendom is Dead, and that speakers who address a multicultural and postmodern crowd ought to adjust their speech to be truly heard and not to simply pacify the masses with a Pollyanna flavored opioid. (I would also add that Christendom’s conquistador-tendencies did the Christian faith no favors!)

In effect, Friedrich Nietzsche’s madman does more to unite and to equip religious and non-religious believers than ideologues, such as McMorris-Rodgers, can ever do. Moreover, I think the preacher would vehemently concur. And why is that?

Well, even though King embraced Christianity and the message of salvation from sin, he often employed the prophetic passages of the Hebrew Scriptures to address a national conscience that included people who did not share his explicit connection to Jesus.

Yes, I think it’s safe to say that Martin Luther King Jr. would be proud to enlist even an atheistic philosopher like Nietzsche, because of the corrosive effect such thinkers have on nominal religiosity and the politicians who lay that hegemony on like a Styrofoam meringue on a plastic pie chart. And to the point that Freda Gandy made immediately following the harsh response of the audience to “God is Good” and to “unity” and to “how as a nation we can heal”—to her and to the children who may have been traumatized by the boos—I simply say that perhaps the first step to cultivating trustworthy citizens is that we jettison our sanctimonious belief in the Emperor’s elaborate wardrobe. And perhaps the second step is that our children learn how being on stage doesn’t automatically imbue one with the worthiness of respect… and that behind the Wizard-of-Oz pyrotechnics there’s a person of flesh and blood who ought to be held responsible for the ways her actions/votes correspond to her words… and perhaps our children ought to learn how to get along with elevator-dwellers who do not espouse belief in God.

Now, to be clear, I do not sing the accolades of a nihilist like Nietzsche, who spent his final decade suffering from dementia. (I sing the affordable health care of those who may suffer from dementia today.) But the author of “Beyond Good and Evil” and “Thus Spake Zarathustra” has a place in the elevator too. He’s there, I think, guarding against the use of religious slogans which are designed to placate the individual. And he’s there to help us hear when the community for which we yearn becomes little more than a guild of the like-minded who perpetuate the status-quo. (See the McMorris-Rodgers endorsement of the status-quo here.)

I honestly don’t know where Spokane stands in relation to the tyranny of the status-quo. I’ve heard the demographics playfully portrayed as follows: ‘Spokane’s not a Little Seattle. It’s a Big Ritzville’—and to the extent this is true—I will commend and not chasten those who shouted “Save Our Health Care” before marching on Monday. I affirm and applaud you. It’s you I salute, not because you’re about to die, like the gladiators of Roman lore, and not because you’re entertaining, as those who banter on CNN, MSNBC or FOX are. You are worthy of salute because of the motto, by which you abide, a motto which irritates you to SERVE.

Subversive relationships, which
Empower the broken-hearted, and which
Rehearse the possibilities for healing amid
Vacuous political pronouncements so that our words
Embody what we have done and what we will do.