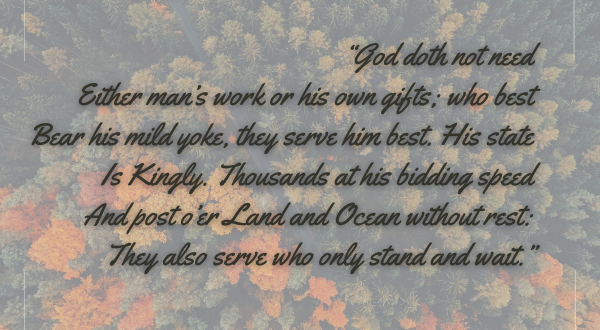 When I consider how my light is spent, I’m grateful

When I consider how my light is spent, I’m grateful

My age-related macular degeneration was first diagnosed several years ago. It’s gradual, but it’s the leading cause of vision loss for old folks. When I learned I had it, my mind leapt to John Milton’s insightful sonnet that begins: “When I consider how my light is spent, / ere half my days, in this dark world and wide…”

My light isn’t nearly spent, nor, I hope, is my life. I have much left to rejoice over: a wife of 60 years who bore us three children; who in turn have married and borne, in total, 10 grandchildren; two of whom have produced three great-grandchildren. And there’s much love among us all. At this point, life is good!

I turned 86 last month. Much of my sight still remains. Milton was half my age when his eyesight left him. No one knows the cause. I can’t imagine losing my sight in my 40s. It’s hard enough to contemplate it in my 80s.

A large part of Milton’s life was spent in service. He was intellectually gifted. Nourished on the just-published King James Bible, he was deeply religious, a God-fearing Puritan. He wrote this sonnet three years after going blind to lament his inability to use his talents, considered by many to be on a par with Shakespeare’s.

The sonnet alludes to the parable of the talents (Matthew, 25:14-30): “And that one Talent which is death to hide / lodged with me useless, though my Soul more bent / to serve therewith my Maker…” He wishes to serve but fears his sightlessness will prevent him from presenting his “true account” on Judgment Day, when God might “chide” him.

He asks, “Doth God exact day-labor, light denied?”— then answers his own question: “God doth not need / either man’s work or his own gifts. Who best / bear his mild yoke, they serve him best.”

Service to humankind infuses most religions: the “Golden Rule is ubiquitous. In Baha’i scriptures,  Baha’u’llah wrote, “Wert thou to consider this world, and realize how fleeting are the things that pertain unto it, thou wouldst choose to tread no path except the path of service…” He also wrote, “That one indeed is a man who, today, dedicateth himself to the service of the entire human race.”

“This is worship:” said his son ‘Abdu’l-Baha,” to serve mankind and to minister to the needs of the people. Service is prayer.” Elsewhere he wrote, “Think ye at all times of rendering some service to every member of the human race.”

Milton did serve long after going blind. He wrote major literary works. He spent years dictating “Paradise Lost,” perhaps the greatest epic poem in English, to “justify the ways of God to man.” It was first published fifteen years after he lost his sight.

Loss of sight is nothing to make light of, but I try. It’s been said, “The eyes have it!” (Sorry.) My keyboard and 34-inch monitor are friendly. Small type is not, and magnifying glasses are awkward at best. Participating in book clubs or study groups where each gets to read aloud, I whip out my quick-draw pocket LED to light my way. Even then, the eyes don’t track all the time, and reading aloud leads to some hilarious results: “Did he really write that?”

Rather than complain, I continue to polish my warped sense of humor. My son once gave me a cushion with the words, “Learn to laugh at your troubles. Everyone else does.” I disinherited him immediately.

Age exacerbates underlying vulnerabilities, which differ in each of us, like hearing loss. With today’s advanced technology, my hearing aids are blue-tooth enabled. This drives others crazy when they’re trying to converse with me. The rest of my health is pretty good. No one can accuse me of being unbalanced; I still put on socks standing up.

As I consider how my own light and life are spent, I try to bring readers closer together by writing. We are one species sharing – and dominating — one planet. How might we better understand each other and move past the artificial boundaries, the mental gated communities, that separate us? Recognizing the inherent oneness of humankind is a necessary beginning, and it’s supported by both science and religion.

A Pullman columnist still publishes at 90. I’m hoping to do the same. As my eyesight deteriorates, I seek ways to use my writing in service. My future appears dim, but I envision bright possibilities; I may be losing my sight but not my vision.

Milton’s closing lines describe how “thousands” serve God by speeding “o’er Land and Ocean without rest.” But, he concludes, “They also serve who only stand and wait.”

With apologies to this great poet, I’ll adapt that last line:  They also serve who only sit and write.

Previous YWCA Sparks Conversation During Teen Dating Violence Action Month
Next The Afterlife: Opinions of Life After Death in the Eastern Orthodox Church