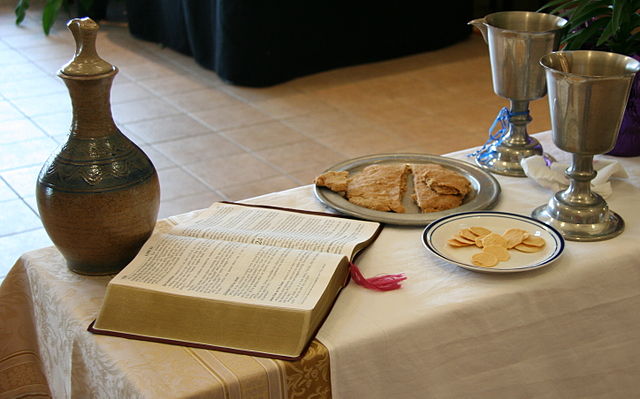 The movie runs simple. An 11-year-old, Riley, moves with her family from Minnesota to San Francisco. She does not like it one bit, and almost runs away by catching a bus back to Minnesota. The brilliance of Pixar’s latest movie  is that we go on an adventure in Riley’s mind with her five core emotions to see her motivations. Watching it, I discovered an insight into a theological mystery about Jesus’ crucifixion.

In one of the turning points of Pixar’s latest movie, “Inside Out,” Riley’s imaginary friend Bing Bong and one of her core emotions, Joy, are caught in Riley’s memory dump. Joy has an epiphany and realizes the value of another core emotion, Sadness. Joy makes a desperate attempt to return to Riley’s Headquarters with Sadness to save Riley from leaving on the bus. Yet she, though a series of adventures, is stuck with Riley’s old imaginary friend, Bing Bong, in the Sheol of the Brain. Joy and Bing Bong are trying to get out of the memory dump of no return with the use of an imaginary rocket wagon. It is too heavy, and Bing Bong sacrifices himself so Joy can save Riley. The last we see of Bing Bong is as he fades into memory dust in Riley’s brain. My wife cried at this point. Strange to say it, but this scene helped me understand a deep mystery in the Bible. Well, the scene was another piece to the puzzle, as is being married to a Biblical scholar.

The mystery for me arises from the two criminals on the crosses who share the crucifixion stage with Jesus. Luke (Luke 23:39-43) reports one of the criminals demanding Jesus save himself, him and the second criminal. The second criminal rebukes the first one by claiming their crimes deserve the fate of the cross, while Jesus was an innocent man. The second criminal then turns to Jesus with a simple request to be remembered when Jesus comes into his Kingdom. The usual interpretation of the first criminal mocking Jesus always felt flat to me because of the horrific nature of crucifixion. The first criminal must have been suffering in his own pain. I could never see him rising out of his anguish to just say nanny nanny boo boo to Jesus. That seemed not to fit the facts. His plea must have been real and out of his suffering on his cross. So what is the difference between the two pleas?

The second criminal rises above his own individualism, confessing and answering his own suffering with compassion for Jesus. The second one then simply asks to be remembered, and that was enough to be saved. When we see in the naked light our own sin and how it causes other’s and our own suffering, we can wallow, or we can rise above it to confession and compassion. We can then turn to Jesus and ask the incarnate God to remember us. Yet, how does this save us?

Now comes the second part of the puzzle. My wife has pointed out that when Jesus instituted the last supper or Eucharist, it is usually translated as “ do this in remembrance of me.” The way it is translated, we are to remember Jesus as we take the cup and the wine. The whole history and controversy over real presence or transubstantiation arises out how Jesus is present in the last supper. The debate about the last supper boils to the meaning of the meal. Is Jesus present in the meal in a real or mystical way? Or is the meal symbolic?

Without getting into the whole debate, what my wife, Lace Williams-Tinajero noticed in the original Greek was that the case was singular and indicative, which implies that it was Jesus doing the remembering when we partake of the wine and bread. When we eat the bread and drink the wine, it is God in Christ who remembers us, and not the other way around. When Jesus remembers us we join him as he promised the second criminal. For what God remembers becomes fully alive.

It may seem a trivial point, but combined with the second criminal’s plea for Jesus to remember him, it is not. We all know we came from dust and will return to dust just like Bing Bong. The world will forget us as it will for the vast majority of humans within a short time of their death. We enter death or non-being, and most of us within two or three generations will be forgotten and end in the great collective memory dump of human beings. We will all dissipate like Bing Bong, like so much memory dust in the whirlwind of history. Who will remember us?

When I take the wine and bread, Jesus remembers me, and in his remembrance I find my being and life. I return to life as Jesus remembers not only me, but also son, my wife, my family and all of those I share the meal with. Wine, fermented grape, becomes Jesus’ blood and recalls his story and his promise not to forget me. The bread broken for me reminds me of being alive in God’s memory. As the tang of the red wine meets my lips, God’s kiss of his blood gives me life. Discovering my place in the divine memory awakens me to the fullness of being alive.

Previous Interfaith leaders find common ground promoting Internet freedom
Next Review: “Between the World and Me” adds to needed discussion on racism