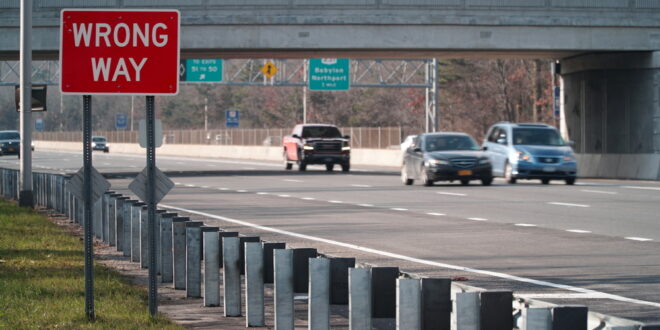 When democracy is a one-way freeway

When democracy is a one-way freeway

A sad memory recently came to mind. Shortly after the interstate was built in the Silver Valley in the early 1960s, a well-known woman from Kellogg was killed in a head-on collision after she got onto the freeway going the wrong way.

I thought of her while I imagined democracy as a one-way freeway headed for the future. The vehicles on that freeway carry inspired concepts such as, freedom of many kinds, inclusion of all persons, equality and justice for all persons, citizenship, civility and mutual respect, consent of the governed, voting rights for all citizens, minority rights and personal and social responsibility. It’s a crowded freeway because democracy’s responsibilities are so diverse.

But in recent years — and particularly obvious during this highly-charged time in America — more and more irresponsible vehicles are getting on that democracy freeway going the wrong way. It’s dangerous for those democratic concepts because they’re being sideswiped, maneuvered off the freeway, challenged to political demolition derbies or simply hit head-on.

Here are some of those wrong-way vehicles: the 2020 election “Big Lie”; the insurrection of Jan. 6, which was political violence in word and deed; increased mass shootings; blocking voting rights in some states; endangering women’s reproductive health rights; small groups trying to impose their religious and political will on a community, state or our nation; general and aggressive disrespect for opposing opinions; and “alternative facts” substituted for factual truth. The list seems endless.

Speaking of truth, many of the hyper-aggressive Christians I read about and occasionally encounter, seem to be focused much more on Old Testament images of God as frivolously bloodthirsty and judgmental. As though those images justify their own anger and judgmentalism. I rarely hear anything about the gospel of Jesus. Why is that?

So, I offer a quick reminder to these folks that the Old Testament prophetic tradition tells a different story. Contrary to our common perception, the prophets weren’t future-tellers. They may have anticipated future events sometimes, but their primary function was to speak God’s reality to the people’s behaviors and self-delusions.

The Hebrews were consistently blowing off the covenant they had made with God. So the faithless behavior of “the chosen people” was the meat-and-potatoes of the prophets. They brought a view of reality to the chosen that was God-born. But the people continually dismissed it.

A good summary of the prophetic task from Moses to Jesus comes from Marcus Borg in his book “Convictions: How I Learned What Matters Most.”

“Their courage came from their vocation as participants in God’s passion for a different kind of world here and now: the transformation of the domination systems of this world into a world of fairness where everybody has enough and no one shall make them afraid.”

Jesus certainly lived in this tradition also. So he infuriated the dominant political system. Bringing God’s reality to the Pharisees’ view of their place in Jewish society brought him to a cross.

But Jesus’ passion to live his experience of God as a man committed to “comfort the afflicted and afflict the comfortable” was bone-deep in his daily life. He could do no less.

That’s the Jesus we read of in the Gospels. He wasn’t a Jesus who would distort God’s love for humanity by going along with the wrong-way vehicles that divert — and potentially destroy — concepts and behaviors that protect the unprotected and include the excluded persons in our society.

We are really so much better than when we go the wrong way on democracy’s freeway. Yet we continue to do so, or encourage others to do so. Check your spirit, deep-down, before you look for that on-ramp to the freeway. Make sure you’re headed toward the future.