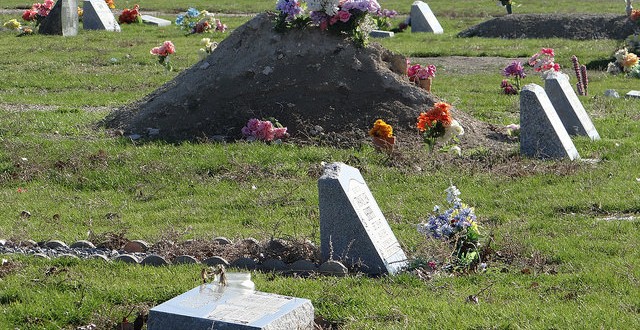 When Children Suffer To Prove Their Parent’s Faith

I have a somewhat odd pastime: I like to visit old graveyards. I’ll be driving down some winding country road, and I’ll spot the tell-tale signs — a rusted metal gate, a large overgrowth of trees in the middle of a wheat field. I’ll push through the brush and find the headstones, sometimes over 100 years old, sitting at odd angles with the names and dates barely legible. I wonder about the lives of the people as I see the pattern of their family tree and the loving inscriptions left for them. Each headstone is a reminder to me that death is a small price to pay for being alive.

Occasionally I come across the tiny headstone of a child. I pause on these a little longer. Here, I’m not left with warm imaginings of lives lived and memories made, but of the potential that was lost and the tragic sadness that the death of a child brought to the families buried next to them.

I tell you this to explain the emotions that come to me when I think about a particular burial ground in Idaho where the headstones of children aren’t just here and there. One in every three of the dead in this cemetery are children under the age of 15. This isn’t an ancient graveyard from before the dawn of modern medicine, the graves are recent, and there are several new ones each year.

This tragic place is Peaceful Valley Cemetery in Caldwell, Idaho. The children buried here died from a myriad of causes – 15 year-old Arrian Jade Granden died a slow and painful death from food poisoning. Newborn Micah Taylor Eells died of an intestinal blockage. Steven Paul Hughes died of pneumonia at the age of 3. The seemingly innocuous illnesses may be what are listed on the death certificates, but the biggest contributor to their untimely death is the toxic faith that these children had the misfortune of being born into.

The parents of these children are members of the Followers of Christ, a church that has its roots in Kansas in the 1830s. They believe when someone gets sick or injured, that it is the will of God that they not intervene. This isn’t simply the common belief that many Christians have that prayer can heal  – nor is it a belief that modern medicine isn’t effective. The Followers know that medical attention will help – they provide medical care for their pets and livestock – but they believe that God doesn’t want them to intervene in order to extend human life. Watching the suffering and death of their children, then, is an almost Abrahamic test of their faith.

The location of this graveyard of children is not random. Idaho, in its laws protecting children from neglect and intentional harm, has an exemption for those who choose to heal through prayer alone. On its face, in a vacuum, this looks like a laudable protection of the religious freedom of parents. However, the real affect of this exemption is that children, who had yet to grow into their own religious rights, died a preventable death. These children are robbed not only of their own religious rights, but the right that is a precursor to all others – the right to life. Here in Idaho, we’ve allowed a parent’s perceived religious rights to trump the rights of their children, and to override their own parental responsibilities.

Linda Martin, who grew up in the Followers church and still has deep family ties there, has been working tirelessly to alter or remove the religious exemptions in Idaho. She knows better than anyone the irreparable harm that this dogma has on the people who are trapped by it. “The children who die are not the only victims. Adults who choose prayer and anointing as the only form of treatment are abusing every person who is connected to the deceased. They are forcing innocent people to accept their beliefs and become unwilling victims.”

Attempts to change the laws have failed. Legislators in Idaho aren’t touching it, seeing it as a “controversial” subject. A bill was introduced last year, but never made it to a vote, and the outlook this year isn’t any better. Other religious denominations are slow to rally to the cause. Commentary from Idaho’s public has been a collective shrug, or abstract arguments about slippery slopes and the nanny state.

The deaths of these children are not abstract. It is not an overreach of government to make sure that the rights of one person do not trample the rights of another. The parents do not own these children, and the repercussions of their religious choices should be their own, not their children’s. The weight of their faith should not be built on tiny coffins.

These laws would be fixed if the public demanded it. The Followers of Christ would still retain every right to practice medical neglect on themselves, but would be forced to safeguard the lives of their children until they reach adulthood. The people of Idaho need to stop paying lip service to the idea of religious rights, and start protecting the rights of these children. Every child deserves the right to grow up.

Previous Shining St. Martin’s light in Spokane
Next Poems to get us ready for Christmas

If you want to help stop the unnecessary deaths of children in Idaho please sign and share this petition. Write a respectful letter to Idaho lawmakers asking them to support legislation to repeal or amend Idaho Statute 18-1501 (4). https://www.change.org/p/idaho-governor-idaho-state-legislature-remove-religious-shield-laws-that-prevent-prosecution-of-child-abuse-due-to-medical-neglect-by-faith-healing-parents