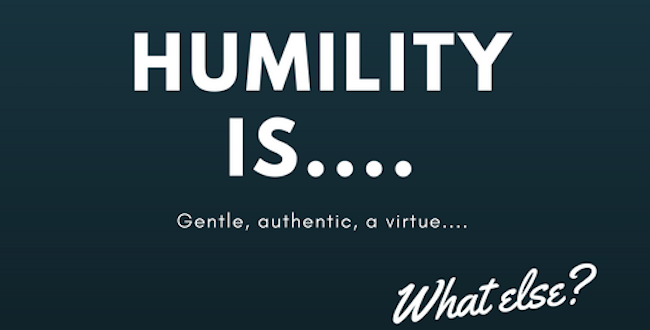 What’s your definition of ‘humility’?

Some years ago, I worked with a local radio station and high school students to produce a show that put the teens face-to-face with people in our community by recording impromptu interviews between the two. What’s love? What’s important? What’s achievement? One memorable evening at a grocery store, I watched and listened as they asked for definitions of courage. The circumspect responses freely shared between aisles of cereal boxes and canned tomatoes were astonishing. Scratch below a person’s veneer and you’ll find that each has gleaned pearls from tough experiences.

Lately, I’ve been especially intrigued by the idea of humility, as much of our national political discussions have deteriorated into a swamp of incivility and the word, humility, seems to have vanished from popular diction. With recorder in hand, I began to query strangers for their personal definitions of the concept. It didn’t surprise me that the first person I asked, a retiree in an Idaho coffee shop, responded, “What’s that?” Knowing he was speaking half-truth and half-sarcasm for our times, he had a good laugh. I wasn’t sure if I wanted to laugh along.

The next gentleman said he didn’t want to be recorded, but eventually told me that his wife was emblematic of humility: she took care of him, she cared about him, and she cared about their children. I appreciated his personal answer, but it also signaled to me that the word, the idea, of humility might be out of circulation as a cultural virtue.

So I cheated. The next time one of my writing classes called “Making it Matter” gathered (through Spokane Community Colleges’ Act Two Program), I gave them some minutes to contemplate the word. All my “students” now are 55 and over with a lifetime to experience humility intimately (who doesn’t feel more humbled as they age?), and by the examples of others. Some of their thoughtful responses follow.

Here’s a short scene/essay written on the spot by Dennis Ashley:

“Are you making fun of me?” she asked her husband angrily.

“I thought that was clear,” he shot back.

And at that point she knew she could take the whole conversation down a road they had walked down one too many times—a road with anger and hurt feelings. Or she could travel down a pathway that filled itself with humor and unadorned truth.

She chose the second path. She laughed. They teased each other for a few minutes, and underneath the laughter rested some degree of truth they both needed to share and hear, a large glistening, un-mined nugget of honesty.

Maybe that is the definition of humility. To engage in honest conversation without the attachment of ego sucking out the life of the interaction. Humility requires humor, love, and even a certain sense of detachment. But still, all the time, digging for those un-mined nuggets of truth.

Ian Cunningham was absent the day we wrote on the subject, but I invited him to submit something by email. With a dictionary at hand, he wrote the following:

When I think of the definition of any word, I look at the roots and shoots, because language is so green in its growing.  The Latin root generally is defined as low, modest, even submissive.  The Latin get tastier when we dig up “humus,” the original, and so “low” becomes compost, the enriching soil where so much lives and breathes, the dirt from which food comes.  I think of humility, then, as an understanding that all my beliefs are incomplete, to be broken down by life’s experience and becoming something simpler and richer at the end.

David McClure, former pastor of the Unity Church of Truth in Spokane, had clearly given years of thought to the subject. In a few minutes time he produced a guide for life that will be printed up, framed and hung on my office wall:

I am humble when I am teachable. When I know I don’t know, but I want to know and am willing to learn. When I dare to ask myself, “What’s the lesson here?” When I stop assuming, categorizing, and pigeonholing. I’m humble when I listen to other people, to books and to nature…I am humble when I don’t come to conclusions or discount an idea or an inkling.

I am humble when I’m all ears and no mouth.

In our youth-worshipping culture, I feel not only privileged to work with older writers, but am thoroughly—yes, I’ll say it—humbled by their wisdom. Although this exercise would have been a great contemplation for the high school students I used to teach, I’m confident their thoughts on this topic could not have pulled such depth to the fore. How could it? The “softening” mentioned above by Shelly Barber takes years in the making—we ripen slowly.

PS: Feel free to send in your own definitions of humility for this column in the comment section below.

Previous MercyMe’s new album, “Lifer” offers something for everyone
Next The beauty of remembering