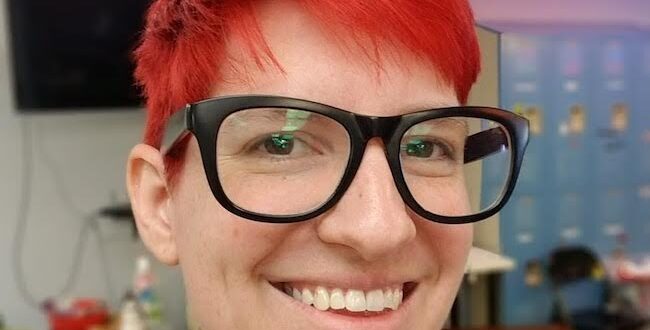 What’s In A Name?

What’s In A Name?

Outside my family, she may have been the most important person in my life.

I do know my life would have taken an entirely different course had it not been for Alyce Sheetz, my teacher, my mentor, and my friend.

Sheetzie, as she was known to her students, taught journalism and yearbook at South Eugene High School. She was a 50-something woman who had devoted her life to molding students into future professional journalists.

As a first-year high school student – a sophomore in those days – I was not allowed to join Sheetzie’s newspaper or yearbook staffs. But I hung around the infamous Room 85, bothering reporters and editors, and pursuing my first love, also a newspaper groupie. Sheetzie took notice.

I was able to join The Axe staff in my junior year and quickly took to reporting. I enjoyed the research and the interviewing. Mostly I enjoyed the writing. And I was pretty good.

One of my first stories, an interview with a shop teacher who had survived the Bataan Death March in World War II, won a Columbia Scholastic Press Association writing award the following year. I was able to go to New York to accept it. I still have the plaque.

As that junior year wore on, I was given more and tougher assignments. I did some copy editing and some page layout. I became a regular at our twice monthly production nights. I desperately wanted to be the editor-in-chief when my time came, and I devoted all my energies to that goal.

Toward the end of my junior year, Alyce asked me to stay after class one afternoon. We sat down to look at some picture negatives for the next edition. I remember the conversation as if it were yesterday. Alyce was a chatterer. She loved to tell stories, to gossip, and to talk journalism. It took her some time to get to the point.

“You know you are going to be editor next year,” she said.

That was it. The key decision point in my life. Sheetzie had singled me out and in doing so had made it clear to me. My future would be in journalism.

Sheetzie remained a part of my life through college and beyond. In the group photo of my class’s 20th reunion in 1988, she is front and center. She had cancer then, though she did not tell us. She died a short time later.

My wife, Ginny Greene, met Sheetzie a couple of times and knew of her impact on my life.

When our daughter was born in 1990, I asked Ginny if we could name her after Alyce. Ginny did not mind the tribute, but she thought Alyce was a bit old fashioned, even with the unusual spelling. So, we named our daughter Alissa. While it is distinctly my daughter’s name, for me it always evoked Alyce’s memory, as a tribute name should.

All of this comes to mind because my daughter recently changed her name. Not legally, but in all professional work, correspondence, and on social media she is now Liss Smith.

Friends have called her Liss for years. But the decision to formalize it took me by surprise. I was confused, even a bit hurt. After all, Sheetzie remains a vital part of my life story and my tribute to her, at first blush, seemed somewhat diminished.

But then Liss and I talked.

Since she became an adult, she told me, she had begun to feel that Alissa did not fit, did not accurately describe her. She said it felt too young and too feminine.

And that is when it all fell into place for me.

Sheetzie was one-of-a-kind. She was fierce, especially in her loyalty to her students and in her relentless advocacy on their behalf. She was independent. She had been married once, the details were sketchy. But she had forged her own career, and established her identity as a single woman in what was still primarily a man’s world. She knew who she was, she knew her purpose.

And I loved her.

Liss is all of those things. She is fiercely independent, totally her own person, unlike anyone else I know. She has forged her own path, defying the expectations of others, measuring her success in ways strictly hers. She knows who she is, and she knows her purpose, advocating for at-risk LGBTQ youth.

And I love her.

I loved her as Alissa and love her still as Liss.

Who she has become is as much a tribute to Alyce Sheetz as any name. After all, names do not matter. It is the person behind the name that counts.

And by that measure, Liss will always evoke the memory of that most important person in my life. Which is precisely what a tribute name should do.

Tags tribute what's in a name

Previous Religious nationalism and the invasion of Ukraine
Next Should You Open a Religious Goods Store?