What “The Mighty Macs” does (and doesn’t) say about Jesus, nuns, feminism and motherhood 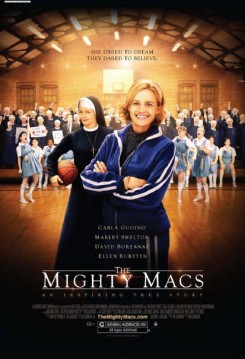 In 1971, Cathy Rush, now in the Women's Basketball Hall of Fame, was ahead of her time as a woman, professional and athlete.

The tiny, all-girls, Catholic college, now Immaculata University, was in near devastating financial straits and facing its demise.

Despite this, and despite the fact that it was an era where women's sports were not taken seriously, the team made it to their first national championship under her lead! Rush and many of her players went on to have remarkably successful sports careers.

Unfortunately, the newly released movie about it, “The Mighty Macs,” focuses on the tension of the story as it happens, not on the bigger picture. It's unfortunate because all the most interesting moments were covered in the two-minute preview. The movie has good content and decent acting, but the screenplay is deeply uninspired. The settings are dull and grey and I nearly got whiplash from the constantly changing, abrupt, short scenes. The audience is poorly informed of the emotional story arch and the plot is scattered and confusing. Sadly, whatever passion and platform Rush had was never fully comprehended. And there is very little humor, in fact very little dialogue, amongst the Mighty Macs team members as the story unfolds.

Not that the movie isn't likeable — loveable, even — if you appreciate basketball. And it redeems itself with the important historical and teaching moments brought to light, even if sometimes the most important points are what the movie doesn't manage to say.

For example, the underlying story of fighting for equal rights. I don't know what I was expecting, but the movie is no Iron Jawed Angels. Its biggest missed opportunity is that the feminist commentary is brushed, or rather stumbled over for the most part. Despite what we might have learned from these women, the nun characters, for example, are more of a happy distraction, because who doesn't love nuns? Admittedly, no one starts singing about “whiskers on kittens” and “their favorite things,” as the movie is no Sound of Music, either. Although at times it's like a true story Sister Act with Mr. Miyagi moments.

Despite the lack of song, I was reminded that nuns are a group of noble women who I am in awe of for their sacrifice and lifelong dedication (I'm nervous for my mission and it is only for 18 months). We do have some interesting looks at the sisters' struggles, sacrifices and idiosyncrasies.

The film includes several sassy scenes showing nuns doing all sorts of surprising activities such as riding exercise bikes, gambling (casting lots?), relaxing in a pub, talking about their (past) love lives, and of course, playing basketball.

My favorite part of the movie is when a nun tells Rush she was influenced in her decision to join the order when a sister whispered to her, “Jesus loves to dance.” She says she interprets the wedding in Cana part in the New Testament as Jesus having a good time and wanting to stay there. I love this idea. I think if Jesus came to earth to get a mortal body, he would celebrate that by rejoicing in dance. Why don't we all do more of that? I think we should. I'll bet He would love it.

There are a lot of cute girls in, as well as out of, religious habit. Besides nuns and basketball we meet a team of young female student athletes, some of whom have to fight for the right to be getting an education. The fight for education is an important struggle to point out. Although today one could argue that women have won that war in the United States, and even exceed men, it's still a heartbreaking problem in other parts of the world.

Feminists Sheryl Wudunn and Nicholas Kristoff, both Pulitzer prize winners, wrote a book and are currently leading a movement called Half the Sky, that argues simply the world's worst problems can be solved by educating women.

The Mighty Mac women were unsupported in their athletic interests (they don't even have uniforms) and find success only after they are taught to play aggressively – like boys. We see a lot of exciting and interesting basketball scenes as the girls use their new skills and fight for their championship.

The movie does include scenes of Rush working with the team in what I think is just about the most important thing a feminist could do. She inspires, empowers and builds up the girls on her team. Rush's husband challenges her on whether her students even want what she wants for them, and she tells him they have been told for so long they can't, it doesn't even occur to them they can. Women all over the world don't even realize what is out there and few of us live up to our potential. We need someone to look up to.

Although the movie keeps quiet about the subject more than it could have, it does open with the radio news in the background mentioning the Vietnam war and saying feminists are protesting for fair pay and saying women should be training to be doctors, not marry doctors.

Although times were changing, it's made clear that the culture of the 1970s was geared toward women marrying young and ignoring ambitions that fall outside of their family life. It's mentioned that Rush is torn between her expectations for herself, and from her husband, to have kids, and her desire to influence her young basketball team. As a professional nanny, I was acutely aware of a hot cultural debate called the “Mommy Wars,” which is the struggle of modern women to find a balance between their professional life and the demands of motherhood, and the judgment those on either side heap on the others.

The guilt and insecurity of some of the moms I worked for was painfully apparent at times. It seems most traditional cultures, including religious ones, insist upon a mother's presence in the home. One of my most important personal beliefs is that that presence doesn't have to be restrictive or demeaning to the mother. What do you think? Rush tells one girl who backs out of the team that she can always follow her dreams and that is her gift to the world. I never thought of my dreams as being a gift to the world, but I think it's a great reminder for women who tend to put others first, that fulfilling your own desires isn't selfish. I think a lot of women take care of their families and everyone else, and put themselves last. We forget that in order to best take care of others, we first must take care of and love ourselves. Unless we want to totally burn out, in which case we are no help to anyone else. And there is nothing wrong with or selfish about that.

Rush gives amazing advice I think every girl should hear, to a girl whose fianc broke up with her,”What you think about yourself should be more important than what he thinks of you.” Rush takes the boy's letterman jacket, tells the girl it shouldn't define her, hands her her own basketball jacket, and explains the second jacket is one she earned, one she can be proud of, and one no one can take away from her. It was a great moment, and I agree the only way to protect girls is to teach them to stand up for themselves and what they believe in. They can find their true value in God, and His value of them, even when others abandon them. I think this is the lack of self-esteem too many girls suffer from.

So, why did the Mighty Macs win their championship? Because they were committed to their dream. If the best way to protect women, and the world, is to empower them to be strong and stand up for themselves, both nuns and athletes wonderfully exhibit this ability. If feminism is about the right to choose (and it is), contrasting nuns and athletes is a great demonstration of two roles that seem so different at first glance, but are both great examples of role models and choices of roles women can take on. Mighty Macs? Good game, after all. “The Mighty Macs” will be out on DVD Feb. 21. It's rated G and runs 99 minutes. Cathy Rush is played by the lovely Carla Gugino, and her husband, NBA referee Ed Rush, is played by the dashing David Boreanaz. Seven of the original Mighty Macs appear as nuns in the movie.