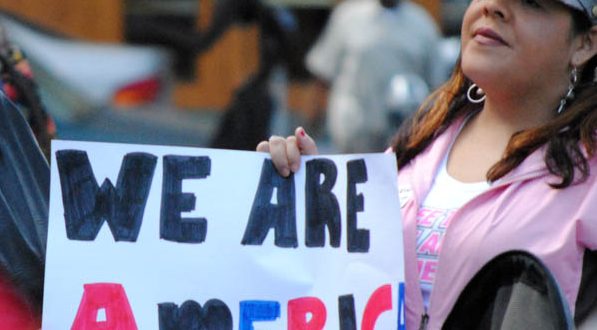 What the Bible really says about immigration

Lots of us grew up looking for a way we could escape our hometown. I was raised in Albuquerque, New Mexico, and as a kid, I hated it.

I dreamed of moving to a city that had grass and trees and better opportunities – a place like Spokane. As soon as I was able to, I fled the Land of Enchantment (I called it the Land of Entrapment) and never looked back.

Lately, though, I’ve found myself becoming protective of the people and culture I’ve left behind.

Our president has called Mexican immigrants animals, rapists and criminals and says illegal immigration at our southern border is a “crisis” that’s costing the country “hundreds of billions of dollars.”

Not only is this rhetoric wrong – since unauthorized crossings are actually in decline, according to data from our government – this language is damaging.

And words often lead to action.

The investigative journalism project Reveal has identified 150 incidents of verbal harassment or physical violence over the past 18 months. In each case, the perpetrator explicitly mentioned Trump.

Seventy percent of my home state hails from Mexico, according to the American Immigration Council. ICE has been busy there. The people being targeted are my soccer coaches, teammates, classmates, teachers, neighbors and friends.

These are the people – not animals – who showed me kindness and acceptance and taught me about family, loyalty and faith.

I didn’t worship with them, because a lot of New Mexicans are Catholic (35 percent) and if you’ve seen my columns before you’ve read bits and pieces about me growing up in a cult. We read the Bible – a lot. We also read other teachings, ironically, ones written by our authoritarian leader.

The Bible passages, though, have stuck with me and there’s a lot to say in there about immigration. When the administration unjustly separated children and parents at the border (thousands of whom are still separated) we all know that Attorney General Jeff Sessions wrongfully used Romans 13 to justify those actions.

If our government insists on using the Bible as a guidebook, how about turning to the Old Testament, which over and over against instructs us not to oppress the sojourner? Or Matthew 25: 25-36, which famously tells us to invite the stranger in?

The Bible tells us this too: Love refugees and don’t oppress them, feed and help them, have mercy on them; it reminds us that we are one with them: “Just as a body, though one, has many parts, but all its many parts form one body, so it is with Christ. For we were all baptized by one Spirit so as to form one body – whether Jews or Gentiles, slave or free – and we were all given the one Spirit to drink. Even so the body is not made up of one part but of many” (1 Corinthians 12:12-14).

I’m not going to run back home, but I am going correct misinformation about immigrants when it comes across my screen or I hear it from someone’s lips. Because speaking in truth is something else the Bible taught me that I can’t forget, and hopefully if enough of us do it, racial harassment and attacks will start to decline.

This column was printed in partnership with the Spokesman-Review.