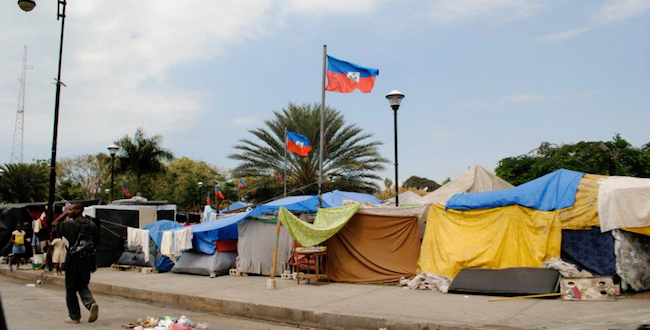 What reporting on the Haiti earthquake taught me about faith, resiliency

In 2010 when a 7.0 earthquake devastated Haiti, I found myself glued to the TV like the rest of America watching the images come through and the death toll rise.

I had been here before. A couch, separated by a screen, watching crippling footage.

The difference, though, was that in just a few days I’d be in the midst of the crumbled buildings and decaying bodies. I was a reporter in Connecticut at the time and a group of volunteers with ties to an Episcopal school outside of Port-au-Prince invited me to tagalong and write about their rescue efforts.

I packed as little as possible —shorts, t-shirts, a hat, sunscreen, my equipment — and prepared to see things I knew I’d never un-see.

And that’s mostly what happened.

I vaguely remember the bus ride from The Dominican Republic into Haiti, and the stark economic difference between the two sides of the island, separated by a gate and some guards.  Though faded now, I can still picture the fallen buildings, like the National Palace which looked like it had been stepped on kicked over by a careless Brobdingnagian. And the apartments and storefronts which had been ripped in half.

Those details of the trip remain with me, but I worry they’ll dim as I grow older. And that’s OK. The rubble isn’t what changed me.

The people did. Their strength. Their joy. Their selflessness.

Jerry and Christopher would be teenagers now. They were about 10 years old when the earthquake took their home from them. It took Jerry’s dad, too. The boys were living with their moms and their siblings in what remained of a hotel 12 miles outside of Port-au-Prince. The ballroom of this hotel, or what used to be the ballroom, was where the Connecticut volunteers were camping out and where they set up the first-aid station. No electricity, no water, no guarantee that the walls still standing wouldn’t give away with the next aftershock.

The elementary school, Ecole Bon Samaritain, hosted us. Staff from that school — the priest, his wife, the cook — made sure were safe and served as translators as hundreds of injured Haitians poured in seeking help every day. The school’s bus driver had been crushed. Each night the staff made sure the volunteers, and me, had enough food — plantains, rice and eggs mostly — to fill our stomachs. Whatever was leftover was given to the families taking refuge in the hotel.

After dinner I’d play soccer with the kids. The ball was flat, but we kicked it anyway. The game was our common language. But before playing each night Jerry and Christopher would offer me their dinner. They’d use hand signals and broken English to ask, “Have you had enough to eat?”

It wasn’t just the children who showed this resilience and kindness.

Aftershocks jolted us awake multiple times. What followed was momentary havoc. Roosters would crow and packs of wild dogs would howl through the streets, babies would cry and people would scream. But then came hymns. They’d gather — 3 a.m., 4 a.m. — whatever time the shaking came, and they’d quiet the chaos with singing.

On Sunday I went to a worship service. The building had collapsed, but the church hadn’t. The pews had been dragged out of the rubble and set up outside the debris. I showed up in the cargo shorts and t-shirt I had worn most of the week. Parishioners were in slacks and ties and dresses with Sunday hats — and everyone had their Bible. They were living in tents, or under tarps. They had ventured into the pile of rocks that was once their homes and salvaged their Bibles, and something to wear to church. And they sang. They thrusted their hands into the air, and they praised when everything around them was in ruin.

The day I forget their irrepressibility, is the day I’ve become too wrapped-up in my own self, thinking what I’m going through is larger or more important than what you’re going through – or what someone across the globe is.

Natural disasters will continue. My hope is that they stop becoming invisible headlines, and instead we pay attention, care, lend a hand if we can and learn from those pushing through.

“Faith, Resiliency and Natural Disasters” is the topic of the Oct. 1 SpokaneFāVS Coffee Talk, which will take place at 10 a.m. in the Community Building, 35 W. Main Ave. All are invited to participate in this community discussion.

Previous A Lost Soul at Lost Lake
Next Ask A Jew: What are the High Holy Days?