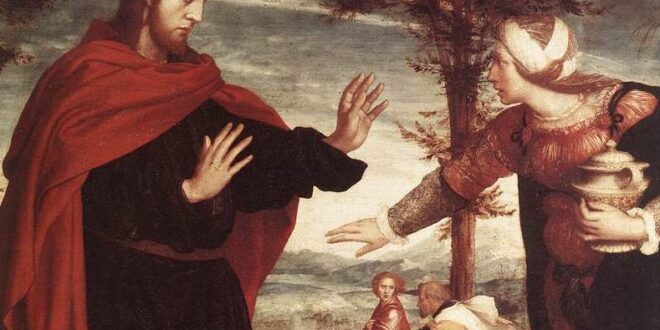 Jesus telling Mary not to touch him, by Hans Holbein the Younger

Not to belabor the point, but President Donald Trump has changed his mind again.

After initially referring to news of the Coronavirus epidemic as a ‘hoax,’ intended to oust him from office, and then coming around to admit to the seriousness of what the World Health Organization had publicly declared a pandemic—meaning the worldwide spread of a contagion for which there is no immunity and no cure—as of March 24, during the fourth week of the Christian Season of Lent, the purported new convert to the faith has said the following, during an interview with Fox News:

“You’ll have packed churches all over our country … I think it’ll be a beautiful time.”

It Is Not Beautiful

Beauty, of course, as we’ve known since philosopher David Hume is “conceived in the mind of the one who beholds it”—and in this circumstance, it is not a beautiful sunrise as the harpist plays on April 12… and it is not the beautiful understanding “of Christ and him crucified” so touted by the apostle Paul in 1 Corinthians 2:2… and it is not the beautiful acts of compassion that are offered by the socially-despised Samaritan, and then received by the one whose been robbed, beaten and left like a carcass on the road to Jericho (Luke 10:33).

No, if this grandiose public figure has his way, BEAUTY = THE CROWD, and if one is prone to doing the math, and doing it morally, the filling of pews by Resurrection Day could amount to the exponential growth of the Covid-19 transmission, and not necessarily the transmission of the good news in Christ at all.  And yet, of course, President Trump may regard the hidden propagation of the illness as “a beautiful time” because the symptoms would not appear until later, and in the interim-incubation period, there would be a flourishing of sit-down restaurant visits for Easter brunch. In other words, the economy would rebound, and the stock market soar, and it would be the leadership of this clarion Christian we’d have to thank.  Packed churches, in this gaudy light, would indeed by beautiful.

Nevertheless, after some of that chronological time had passed, another kind of light and another kind of beauty might enter the minds of those who had sadly contracted, and then, unintentionally, bequeathed, their sickness to others.  Such an alternative source of light wouldn’t be accessible to those who insisted upon the aesthetic lifestyles of the crowd.  And neither would they find beauty in the faces of those overwhelmed health-care givers.  Ethically speaking, those who had competed for ventilators and protective gear would be doing so for the sake of their own patients, their own families, but the choices they were forced to make in the shortage of supplies would not be pretty to them at all.  With the passage of time, after that “beautiful” celebration of Jesus rising from the dead “all over our country”, there would arrive on the world scene a stark realization, and the unmasking of idolatrous worship.  A light would have shone out of darkness, and though the darkness will not (ultimately) overcome it, the Beauty-Appearing would stand in sharp contrast to that of booming industry and business-as-usual.  Or, to put this eventuality another way, an Emperor would have been exposed…  And his clothing, punctuated with a extra-long red tie would have already, in the fullness of time, given away his duplicity.

I recall that final paragraphs in the C.S. Lewis book, “The Final Battle.”  Up and until the moment that Aslan—the Christlike Lion—answers the cry for help, there had been repeated daily press conferences in which a false Aslan has been paraded before the unsuspecting crowd.  Pathetically, this bogus salvation-hero is nothing more than a donkey who has been camouflaged and concealed in the skin of a dead, dilapidated lion.  And the people who had given their adulation to this vacuous varmint are utterly shocked…  At first disoriented, however, many come around to experience the Beauty of the True Aslan for whom they had substituted this collaborative, and poorly contrived, project.  That is, they themselves had contributed to the illusion, to the spell they had fallen under; they had mistaken the wondrously, ineffable splendor of the All-Power, All-Knowing and All-Loving for the mere appearance of ‘looking good’ and ‘feeling good’ about oneself in the short term.  And, yes, after a time that was not all that beautiful, the creatures and creation of Narnia became reoriented and renewed, not as a crowd, but as a community!

Of course, what Lewis explains to the children who read his books is that there are always ‘other worlds,’ and that Aslan is known by other names in those other worlds.  And so, what about this one?  What about this heaven and this earth?

Certain evangelicals, I’ve been told, regard President Trump as if he were the contemporary equivalent of King Cyrus, that Persian conquerer who allowed the exiled people of Israel to return home and to re-build the wall of the temple in Jerusalem.  (See Jeremiah 25 and Ezra 1 for details.)  As an evangelical in the Reformed Tradition myself, however, I’d like to suggest an alternative comparison that may help to clarify the dynamics at work in North America, during the Season of Lent, in 2020—and that is, our current politically-elected leader has not been anointed by either the God of Israel, nor any other god under the sun.  He is, by contrast, one who will use the vernacular of Christianity to prop up a civil sort of religion that supports a thriving money-market—what he believes will make or break his image.  And in this sense, I would argue, Trump is like King Herod who bids the magi to “Go and search diligently” for Jesus so that “I may also go and pay him homage” (Matthew 2:7-8).  Read that last clause very carefully and with a bit of skepticism, because it’s not long after this public remark that a massacre takes place.  And indeed, in similar fashion, our current Herod calculates that the number of possible dead, due to suicide if the economy is not re-opened by Easter.  Asking the public to value their financial futures more than their very lives, he claims how the number of those who would despair unto death “definitely would be in far greater numbers than the numbers that we’re talking about with regard to the virus.”

I do not presume to know what is in the mind and in the heart of any human being.  In fact, like Dietrich Bonhoeffer writes in his poem, “Who Am I?,” my honest answer is that I don’t even know my own mind and my own heart.  The resurrection of Jesus doesn’t give us that assurance.  On the contrary, the assurance goes like so:  God, it’s you who knows!

“Who am I?  They mock me, these lonely questions of mind.

Whoever I am, Thou knowest, O God, I am thine.”

And so, with just a few weeks to go before Easter, I’m wondering if you’re up for a celebration that puts no one at risk physically, but one that does risk that kind of interpersonal intimacy with God.  It is  the intimacy, finally, of the women at the empty tomb, on that first Easter; and I’m guessing, they kept at least 6 feet away.