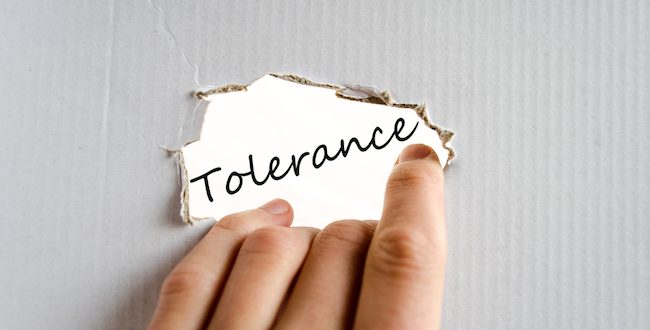 Hand and text on the cardboard background Tolerance concept/DepositPhoto

What FāVS taught me about tolerance

Looking back on this year during my Wolff Fellowship with SpokaneFāVS, I think the most impactful lesson that I have internalized, is that we all deserve to be treated with respect and dignity- everyone’s feelings are as legitimate, valuable and important as others- no more, but no less.

When I first discussed the idea of doing a column for SpokaneFāVS, my initial point of clarification was that I would need to keep all of my pieces objective. To my surprise I learned that this would be quite the opposite, my perspectives and opinions were welcomed and encouraged. I think in our society today, often in striving to be open, welcoming and tolerant to all, I have lost a sense of my voice and confidence in sharing my opinions and vales due to the fear, as a recovering “people pleaser,” that I would offend someone.

I think that the idea of tolerance, especially as I have encountered it within the community of small private- liberal arts university has lost much of its weight and power. As of what I’ve observed: no longer does it mean to acknowledge that others have differing beliefs and opinions and accepting that it is their right to do so, from a place of respect and open-mindedness. Rather, tolerance has become to denotate: acceptance that those beliefs are true- thus if your opinion isn’t the same as the majority and in line with liberal socio-politic, then not only is it not welcome here but it’s just wrong. Tolerance has become so intolerant! Ironically there is little tolerance for the expression of contrary ideas on issues of morality and often religion — which is crazy because technically tolerance is necessary when you disagree with someone: the essential element for tolerance is disagreement — which has been lost in the modern distortion of the concept. It is truly sad to see the implications of this within my own communities, and within our society as a whole — we need a return back to the true meaning of tolerance for all: true tolerance is based on the absolute moral that we should always treat people fairly, respectfully, with dignity and in love.

I think over the years I have lost the ability to express myself unapologetically. I didn’t think that it was OK to talk about myself and share my opinions, thoughts, feelings, especially as a middle-class, white privileged college student; that maybe mine were less valuable and didn’t deserve to be heard as much as others. And maybe too, because the conservative stance has been terribly stereotyped to fit one specific mold. One that, today, is largely defined by far right, out-spoken traditionalists, especially in light of the election of our current administration.

However, regardless of the circumstances, we all have a deep desire to be heard and understood as we are, if not just simply tolerated in its most pure form.

Tolerance is the positive and cordial effort to understand another’s beliefs, practices and habits without necessarily sharing or accepting them. – Joseph E. Osborne