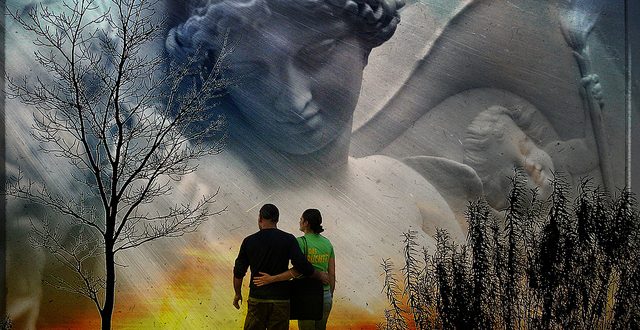 What does the Evangelical Church teach about Angels?

What does the Evangelical Church teach about angels?

Like all questions of theology, Evangelicals first go to the bible and pull all of our knowledge and understanding about spiritual realities from God’s Word.

A quick summary of the teaching is that angels are real not mythological. They are created beings that live thousands of years, but they are not gods. They are not now, nor have they ever been humans. People don’t become angels when they die, angels are a different type of creature altogether.

There are thousands upon thousands of them, probably millions. As spiritual beings they are mostly unseen, but on rare and unique occasions people have been allowed to see them when it serves the purposes of God.

They fall into two main categories, righteous servants of God whom we call angels; and fallen, rebellious angels who have waged war in the past against God, whom we now identify as demons. Both righteous angels and demons have influence on human beings and human events. Angels seek to strengthen human beings, protect them, and draw them toward God. Demons seek to steal kill and destroy human beings and try to undermine any knowledge or awareness of God.  C.S Lewis’ “The Screwtape Letters” would be an accurate and authentic view of how most Evangelicals perceive the influence of the demonic. Some Evangelicals seem overly obsessed with angelic beings and others don’t give them much thought at all. Most Evangelicals hold that both of those extremes should be avoided.

Cherub (plural is cherubim). There are four of these. They are the highest and most powerful type of angel who reside right before or under the throne of God himself. They are described in the Bible as “living creatures” They have four faces, one on each side of their heads, a lion, an ox, an eagle and a human face. They have multiple sets of wings, they can speak, and their bodies are half human and half creature but they do have arms and hands. They are covered in eyes and have wheels for feet. (See Ezekiel chapters 1 and 10 and Revelation 4:1-11 for specific descriptions). Satan started off as one of these before lead a rebellion against God (Ezekiel 28:14-16). Cherubim are mentioned all throughout the making of tabernacle (portable temple from the time of Moses to the end of King David). They are also a prominent architectural feature in the first temple. But none of those passages describe what a cherub looks like; they assume the reader already knows.  That’s kind of a bummer in my opinion.

Seraph (plural is Seraphim). These are the second highest class of angel and also hover near the throne of God. They have a humanlike form but with six wings each.  They are intelligent, and their voices are so powerful that they cause earthquake like tremors when they speak. (See Isaiah 6 for a description)

Other humanlike angels appear to people often in Scripture and speak to humans in dreams, visions, and actual physical form. The word “angel” occurs over 290 times in the bible. The word in both the Hebrew and Greek has a double meaning as “spirit being” and can also be translated as “messenger” (Genesis 19:1, Genesis 28:12, Daniel 8:15-17, Zechariah chapter 1 for some instances). These humanlike angels appear at the birth of John the Baptist, (Luke 1) at the birth of Jesus (Matthew 1:20-24, Luke 2:9-13). And they appear throughout the ministry of Jesus on earth but especially at the resurrection (Matthew 28:2-5, John 20:11).

Only three Angels in the Bible are named. Gabriel who stands in the presence of God and seems to be his chief messenger for big news, appears to Daniel (8:16), to Zechariah the father of John the Baptist, (Luke 1:18-19) and to the Virgin Mary (Luke 1:26). Michael is the only mentioned archangel who is more of a military warrior against Satan and his forces (Daniel 10:13,21, 12:1, I Thes 4: Jude 9, Rev 12:7). The last angel named is Lucifer. (Isaiah 14:12) whose name is sometimes translated morning star, bringer of dawn, or light bearer. In the New Testament he is called Satan, Dragon, Accuser, Beelzebub (Lord of flies), Destroyer, Father of Lies, and numerous other titles.

The Angel of the Lord is a fascinating study. This person appears over 70 times in the Old Testament and speaks to many people throughout Jewish history. Because he often speaks as God himself, many Evangelical Scholars believe he is Jesus Christ prior to his human incarnation. One example is Exodus 3:2 “There the angel of the Lord appeared to [Moses] in flames of fire from within a bush. Moses saw that though the bush was on fire it did not burn up.”

Angels aren’t men and women. Luke 20:35-37, “But those who are considered worthy of taking part in the age to come and in the resurrection from the dead will neither marry nor be given in marriage,  and they can no longer die; for they are like the angels.” This statement by Jesus has led many to believe that angels are not male and female but are sexless. This is not to say they aren’t masculine or feminine in nature but rather, that they don’t have or need reproductive organs.

Some angels seem to be warlike and carry destructive power

Numbers 22:23 “When the donkey saw the angel of the Lord standing in the way with his drawn sword in his hand, the donkey turned off from the way and went into the field; but Balaam struck the donkey to turn her back into the way.”

Children actually do have guardian angels according to Jesus Matthew 18:10 “See that you do not despise one of these little ones. For I tell you that their angels in heaven always see the face of my Father in heaven.”

Jesus is the ruler of all angelic powers and authorities. He is also the one who created them. (Colossians 1:15-16) I Peter 3:22 “ . . . . Jesus Christ,  who has gone into heaven and is at God’s right hand—with angels, authorities and powers in submission to him.

Angels are ranked in a military style of order, demons too. Sometimes the New Testament refers to them as powers, rulers, and principalities in the heavenly realms or places.

This is just a brief summary and introduction into the vast topic of angels and demons. If you’re a reader I recommend getting “Basic Theology” by Charles Ryrie. It’s a great easy to read reference manual on all matters of Biblical doctrine and its chapters on angels and demons are really good. These are also some really good works by Evangelical scholars worth examining. “Angels Elect and Evil” By C. Fred Dickason,  “Demon Possession and the Christian” by the same author, the Massive reference manual “The Handbook on Spiritual Warfare” is probably the most definitive work on angels and demons and their influences. You could try the very controversial “God At War” by Gregory Boyd.  For an easier reading introduction into the topic of demons try “The Bondage Breaker” by Neil Anderson. On the topic of Satan from a non-Evangelical perspective, I really liked “People of the Lie, the hope for healing human evil” by Psychologist M. Scott Peck who also wrote “The Road Less Traveled.”