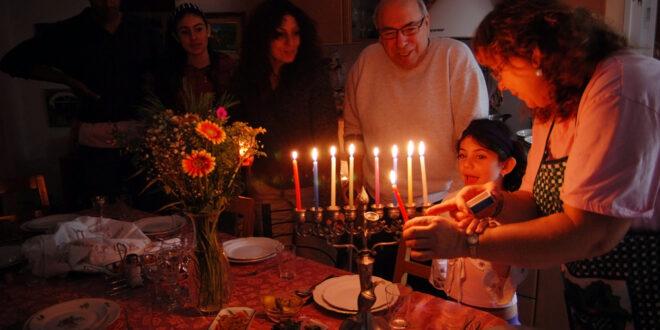 What Does a Giant Light-up Inflatable Dreidel-Playing Dinosaur Have to Do with Chanukah?

What Does a Giant Light-up Inflatable Dreidel-Playing Dinosaur Have to Do with Chanukah?

What does an inflatable dinosaur holding a dreidel have to do with Chanukah? Some may scoff and argue, “Nothing. It’s just a sign of the Christmasification of Chanukah.” Others, however, may argue Nes-Gadol-Hayah-Sham-a-saurus certainly does publicize the miracle and therefore is the very essence of Chanukah.

Chanukah celebrates the Maccabees’ win over assimilation. They adhered to their faith and traditions and refused to submit to the Greeks. When Antiochus banned Jewish observances, many Jews founds it easiest to just assimilate.

The Maccabees, however, rebelled against that and held tight to their Judaism. A whole war was fought over it where Jews and Jewish observance won. The Chanukah story’s ending is the traditional Jewish tale of, “They tried to kill us. We won. Let’s eat.”

The Chanukah story’s ending is the traditional Jewish tale of, “They tried to kill us. We won. Let’s eat.”

In recent years, a surprising abundance of misguided Chanukah merchandise has appeared declaring that Chanukah can be reduced to things like, “Love, light, and latkes,” “Kindness,” or “Peace, love, light,” and for some particularly baffling reason, gnomes.

In reality, Chanukah commemorates a literal war. It wasn’t about peace at all (also, given his whole fight against assimilation, Judah Maccabee would probably have some harsh words regarding gnomes, which have traditionally been used in Christmas imagery, being painted blue and stuck on Chanukah merchandise).

One of the steps in celebrating this fairly simple and minor holiday of Chanukah is publicizing the miracle. We’re told to light our hanukkiot in windows facing the public where the candles can be displayed.

Some say this is to remind the outside world that we are still here and still Jewish. Others say it’s to remind fellow Jews of the same thing.

In their discussion of how to observe Chanukah, the rabbis spend time discussing not only that displaying the miracle is necessary, but the finer details of how to make sure we’re making the display public enough.

Some argue that the attempt to decorate our homes with lights and inflatables for Chanukah is making a big deal out of a tiny holiday and in doing so we’re just trying to be more like our Christian neighbors with their Christmas decorations.

However, if publicizing the miracle of Chanukah is a very Jewish thing to do, then maybe those inflatable yard dreidels, yard signs featuring polar bears donning Chanukah sweaters, and yes, even Dinokkah the Chanukah Dinosaur are keeping exactly in line with what Judah Maccabee would have wanted.

Dorothy-Ann Parent (better known as Hyphen) is a writer, a traditional Jew, a seeker of justice, a lover of stories and someone who’s best not left unattended in a bookshop or animal shelter.

Previous Ask a Muslim: Will Allah Forgive My Mistakes?
Next Why a Florida school district banned a book about Shabbat