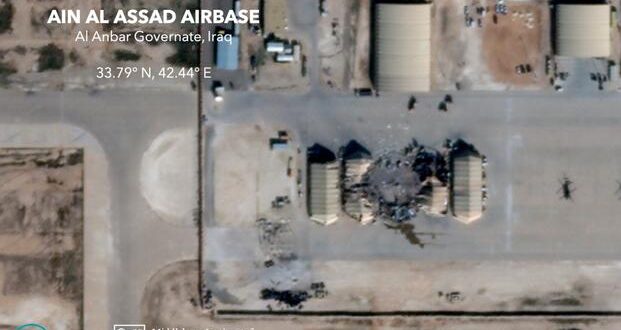 This satellite image provided on Jan. 8, 2020, by Middlebury Institute of International Studies and Planet Labs Inc. shows the damage caused from an Iranian missile strike at the Al Asad Air Base in Iraq.

We all know that ruthless, power-hungry warmongers are not strangers to the human race.  This has been repeatedly illustrated throughout history, in the persons of Ghengis Khan, Adolf Hitler, and Joseph Stalin – to name just a few.  But my present concern, in light of recent world events, is how many of these tyrants were religious hypocrites who feigned devotion to the religions of their times. As it was then and is now, they did this in order to enlist the support of the masses.

The other morning, I happened upon some New Testament Scriptures that appear to affirm this very fact.  In the context of Christianity, these people were called “antichrists.”  Note that this is in plural, and that these words were written over two thousand years ago:

“Children, it is the last hour; and just as you have heard that the antichrist is coming, so now many antichrists have appeared. This is how we know it is the last hour. They went out from us, but they did not belong to us. For if they had belonged to us, they would have remained with us. But their departure made it clear that none of them belonged to us.”  – 1 John 2:18-19 (italics mine)

While there is much talk among Christians about the Antichrist, it is clear that the author is referring to a general human phenomenon, one that has been repeatedly played out in history.

The authors of the site Liberté, Égalité, Fraternité — Exploring the French Revolution (provided by the Roy Rosenzweig Center for History and New Media) have this to say:

“Napoleon was not irreligious in the ordinary sense of the word. He would not admit that there had ever existed a genuine atheist; he condemned Deism as the result of rash speculation. A Christian and a Catholic, he recognized in religion alone the right to govern human societies. He looked on Christianity as the basis of all real civilization; and considered Catholicism as the form of worship most favorable to the maintenance of order and the true tranquility of the moral world.”

Napoleon’s own words reveal this conviction:

“The Bible is no mere book, but a Living Creature, with a power that conquers all that oppose it,” he said, shortly before he proceeded to go about conquering everybody who opposed him.

“If positive Christianity means love of one’s neighbor, the tending of the sick, the clothing of the poor, the feeding of the hungry, the giving of drink to those who are thirsty, then it is we who are the more positive Christians. For in these spheres the community of the people of National Socialist Germany has accomplished a prodigious work.” — Adolf Hitler, February 24,1939.

We all know what Hitler did after that. The Bible itself may be all about feeding the hungry and helping the needy, but the Nazis didn’t exactly do that, did they?  From all I have read about the early life and works of Adolf Hitler, his entire Christian premise was nothing but a convincing lie.

Further quotes are unnecessary.  I have seen Trump evangelicals flying signs that read: “The End is Nigh!” and “Ye Must Be Born Again!” at the same time as “Donald Trump for President 2020!”  Tenets of evangelical Christianity are mixed in with a political affiliation in a way that defies the principle of Separation of Church and State.  That Donald Trump has placed himself in a position to generate enthusiasm among evangelicals is obvious.

So let’s look at the ancient words of wisdom once again:

“They went out from us.” “Us,” in context, means the Church — the body of Christian believers on earth.

“But they did not belong to us.” — They weren’t truly Christians. They were trying to fool the God-fearing masses into believing they were true Christians in order to gain their allegiance.

“For if they had belonged to us, they would have remained with us.” — Did Hitler “remain” a “positive Christian” who was concerned with the needs of the poor?  Not at all.  Hitler rounded up the poorest people in Germany — the homeless people — and crammed them into concentration camps where he starved them to death.

“But their departure made it clear that none of them belonged to us.” — whoever they were. All those little antichrists have nothing to do with Jesus, his life, his teachings, his love.

Donald Trump operates within the realm of a hypocritical form of evangelism powered by Fox News, preying on the ignorance and xenophobia of the gullible and the threatened. If we even make it through the next few days — which is a pretty big “if” — how long will it be before Trump “departs” from the pseudo-Christian lie that he has created, and proceeds to be the next Hitler, in the time-told spirit of Antichrist?