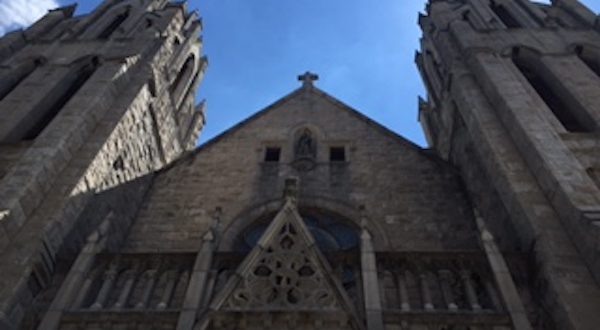 We’re Going To Be Alright

Saint Augustine’s Catholic Church sits tucked away in a corner off of the renowned U Street in Washington, D.C. The area it resides in is a perfect mix of modern and old—though more modern is starting to creep into the area. But have no fear; St. Augustine’s will stay standing there as she has been since 1876. Her roots began in 1858 when a group of emancipated black Catholics decided to start their own church, under the name of the Blessed Martin de Porres, they started a black school too. At a time when African Americans were still being outcast by many white Catholics from worshipping with them, and the leadership of the American Catholic Church merely accepted their existence in the faith, they felt as if they needed their own safe, culturally relevant space to worship. However, the Civil War broke out and thwarted the efforts of this new parish trying to grow until 1876, when the church and school were able to come back together and rebuild under the name of the African Saint Augustine of Hippo. The church is now known as the “mother church of African American Catholics.”

The mission statement of the church states, “Saint Augustine will continue to be a center which recognizes, proclaims and preserves our Black Roman Catholic Heritage.” Black Roman Catholic Heritage is not a history well known. The Pew Research Center reports that 59 percent of African Americans are members of historically black Protestant churches, 15 percent identify as Evangelical Protestants and only 5 percent are Catholic. This is mainly because the forms of Christian worship that African Americans have today derive from slavery. Post African diaspora, slaves were forced to learn and worship Christianity. Inevitably, the melding of cultures spawned a new one, which is why you see the great difference in worship style between many white and black Christians.

So what constitutes a historically African American Catholic church? This was the question on my mind as I headed up the gray steps to the big wooden doors of Saint Augustine’s. I am black. But I was raised in a predominantly white Catholic church. Growing up, the only thing I ever knew as Catholic tradition was a euro centric worship style. The way I grew up as a Catholic was the way I thought all Catholics were. However, as I got older I learned of the varying traditions woven into Catholic teaching—the rhythmic and ornate style of Latin American Catholicism or the intricate and elaborate ways of Vietnamese worship.  Nevertheless, I never experienced the worship traditions of black Catholicism, until now.

From the moment I sat down in a pew, I was given nothing but warmth and welcoming. Little, old black ladies came up and asked me who I was and where I was from (the community is so tight knit that they know when an unfamiliar face is in their midst). They kissed my cheeks and called me not by name, but endearing terms usually reserved for someone you know. Everyone seemed to know each other; in fact there was so much noise that it took a minute for Mass to get started because everyone kept chatting. When the music started I instantly felt the soulful warmth that only comes with black culture.

The essence of black worship manifested itself throughout Saint Augustine’s in emotional, expressive gestures and impassioned responses. This animated exhibit of faith in a Catholic church in the middle of Washington D.C., can be traced back to the great migration of African Americans out of the south to places such as D.C. Chicago, New York and Los Angeles. Even when fleeing the oppressive hand of Jim Crow. It was those brave emigrants that were determined to hold onto pieces of black culture as they made their way north who are to thank for the presence of Saint Augustine’s in the middle of a northeast metropolitan city.

The opening song had everyone clapping, jumping and booming with the spirit. I was clapping along within seconds. The pastor of Saint Augustine’s is the Rev. Patrick A. Smith, who is an African American. But the Mass was led by Fr. Steve, who is Caucasian, however, it was immediately obvious that he was intertwined with this black community. The way he spoke infused the church with energy and life! His voice boomed through the church as he preached more like a southern preacher than any priest I had ever heard. Every few minutes he would ask for an “amen” and be greeted with a resounding one from the congregation. Each hymn was more beautiful than the last. Every voice in the 50 person Gospel choir melded perfectly together like tea and honey. The choir was a mixture of young and old, with each person playing a crucial element, from the soloist to the pianist.

It was the catering to black issues though, that really made me realize how engrained in the struggle, the beauty and the reality of black experiences, Saint Augustine’s Catholic church is. The responsorial psalm begged for justice. The priest centered his homily on the lack of justice for the black community currently and the acts of violence that have inundated the world as of late. He talked about the need to include every neighbor in the fight for justice. At one point coming to a crescendo of,
“I don’t give a damn if you are black, white, ugly, pretty, skinny, fat, lesbian, gay or straight; when you walk into this church you are welcomed! As Saint Augustine’s was built off of the feelings of outsiders! The table of God is not exclusive! The table of God is not exclusive!” At this point the whole congregation stood and clapped, whistling and hollering. As the homily came to a close and Fr. Steve exited the podium, another round of applause occurred. I sat there in admiration. The passion and the utter rawness of emotion that the parishioners were allowing to freely flow through the church, moved me. I have honestly never witnessed a standing ovation during or after a homily.

The prayers of the faithful continued to ask for peace not only for the black community, but for all communities, particularly for the French citizens of Nice. Little black boys were quietly guided by an old, white haired man with the title of “senior usher” pinned to his crisp, white linen button down. The “Our Father” was sung in a very soulful rendition, with everyone joining hands and swaying. There wasn’t one break of hand-holding across any aisles.

I saw so much unity in that “Our Father.” The years of remaining strong and united despite the trials that faced the parish of Saint Augustine’s, silently spoke to me as I sat in that front pew. After communion there was a solo sung by the pianist, in which everyone produced a standing ovation once again. And suddenly I was standing too. Not just for the beautiful hymn that had just been sung. But for the resilience, the strength and the never ending fortitude to survival that is black history, that is the black existence. Thinking back to that first small group of emancipated slaves that started what is now an unbreakable parish, I’m sure they’re smiling from heaven at what their brave endeavor has become.

The past few weeks have been incredibly hard for me. They’ve been incredibly hard for most black Americans. With all of the violence against black bodies, all of the anger and the hate, I have never felt so scared, so anxious, so tired, so lost…but something pulled me to this church on the corner of U Street. It’s like it called me. I went by myself, with no knowledge of the area. It pulled me there.

When the celebration ended, I walked toward the bright light that was the afternoon sun peaking through the church doors. And the song Alright, by Kendrick Lamar came into my head. All my life I had to fight, All my life…hard times like: “God!” bad trips like: “God”…but if God got us then we gon’ be alright.  That’s when I realized that despite all madness that has been happening, black Catholics, black Americans will be alright. We are going to be alright. We always are. Saint Augustine’s abundance of love, care and community made me see that silver lining.

When she’s not busy, she enjoys listening to music, movies, cooking and baking, eating sweets and coffee and hanging out with friends.