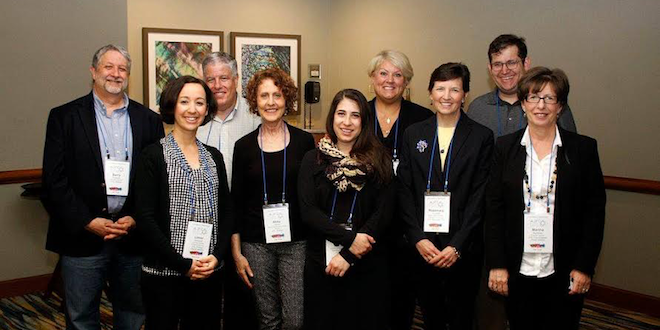 Welcoming the stranger: What I learned from Jewish agencies

I recently attended the annual conference of the Association of Jewish Family & Children’s Agencies in San Diego. The event brought together hundreds of Jewish and non-Jewish human services professionals who work for Jewish organizations, most of which are akin to Spokane’s own Jewish Family Services agency, of which I am the director. The meaningful interactions I had and valuable pieces of information I acquired during the four-day conference are too numerous to summarize well in a short article, so I want to focus on an aspect of the event that moved me greatly: the theme of refugee resettlement as an expression of hachnasat orchim — the Jewish virtue of welcoming the stranger and of hospitality.

On his blog, Rabbi Henry Jay Karp of Davenport, Iowa, notes a prominent instance of this essential Jewish virtue. He cites the Torah portion Vayera (Genesis 18:1-22:24), in which

Abraham was sitting at the door of his tent in the heat of the day when he noticed three strangers approaching.  They were angels, but he did not know that at the time.  As soon as he saw them, he jumped up and ran to greet them, offering them the hospitality of his home.  Though he had no idea of who they were, still he bowed down before them and treated them as nobility, calling them “My lords.”  He offered them a little food and then provided them with a feast of cakes and beef and curds and milk.

At the AJFCA conference, I was fortunate to hear Mark Hetfield, the director of HIAS (formerly known as the Hebrew Immigrant Aid Society), speak twice. In both conference sessions — titled “Branching Out From Our Jewish Roots” and “Social Justice Through a Jewish Lens” — Hetfield described the evolution of HIAS’s refugee resettlement work. He explained that when refugee crises mostly involved Jews, such as during World War II and when many Jews were trying to escape the Soviet Union, HIAS accordingly served mostly Jewish refugee populations.

Countless American Jews have a HIAS story. When I posted on Facebook about hearing Hetfield speak, my mother gave a brief account of my grandmother’s (Oma’s) experience:

Neal, it was because of HIAS that Oma was able to escape from Germany in late 1939 after WWII had begun. My dad was able to leave right after Kristallnacht in 1938 when it was still possible for Jews to leave Germany with appropriate documentation of a sponsor in the U.S. Oma had sponsorship, but she left with the help of the Jewish underground and HIAS.

A Jewish friend added: “HIAS sponsorship permitted my father to emigrate to the U.S. after Kristallnacht as well, and he donated to them for the rest of his life.”

Today, the Syrian refugee crisis has prompted HIAS to focus its efforts on aiding people from that country, the majority of them Muslim. He explained this shift succinctly: HIAS used to aid refugees because they, the refugees, were Jewish. Now HIAS helps refugees of all creeds and backgrounds because HIAS is Jewish — that is, guided by core Jewish values, including hachnasat orchim.

I was deeply inspired by Hetfield’s talks. He explained that HIAS partners with local Jewish organizations, such as JFS agencies, in order to do the work of resettling refugees. Hetfield said that, unsurprisingly, some donors to these agencies (and to HIAS) have expressed concern about helping to fund resettlement of people who are not Jewish, and who may well be Muslim — a faith that some American Jews may have conflicted feelings about, due in large part to the Israel/Palestine conflict. Without disrespecting Jews who have such feelings, Hetfield indicated that some donors’ concern about aiding non-Jews has not prevented and will not prevent HIAS from doing its essential and good work.

Hetfield said something else that I found powerful and true. Jews have faced millennia of persecution. Even the U.S. did not welcome all Jews fleeing Hitler. And even after the lucky ones made it to America and started their new lives, they faced institutionalized anti-Semitism for decades. Today, anti-Semitism hasn’t been wiped from the face of the earth; it hasn’t even been eliminated in the U.S. However, Jews are in a much better position now to help other persecuted people groups. Hetfield reminded us that there is nothing less Jewish about helping vulnerable non-Jews than there is about helping “our own” people, i.e. Jews. Like Abraham, we can act as though everyone in need of food and shelter is one of us. And in that way, we can make it so.

Hetfield said some of HIAS’s Muslim clients have pledged that they will make sure their relatives in the Middle East know that Jews are not what they have been taught to believe we are. HIAS’s work with Muslim refugees creates real and significant interfaith relationships. This work is one of the places where I see hope in reducing the level of conflict between Jews and Muslims, and thus the long-standing tension related to Israel/Palestine. Hetfield said some Syrian refugees aided by Jewish Family Services agencies simply refer to them as “Jewish Family.” Like Abraham, Jewish agencies that commit to refugee resettlement are doing more than just welcoming the stranger — they are expanding the definition of family.