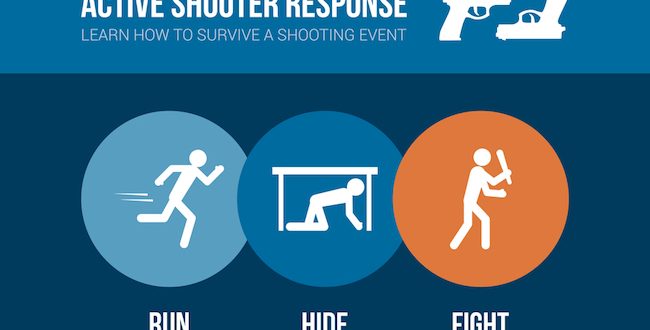 We Won’t Get Out Alive: A Christian Response to Active Shooter Situations

On Sept. 24 Whitworth conducted a routine active shooter drill, typical not just for college campuses but for most U.S. institutions of learning. Public school kindergarteners since Columbine can expect to learn the basics of duck and cover, cut the lights, lockdown and hide. I am writing to question whether Christians should accept this “typical” procedure.

My comments are spurred on by the discussion we had in the English department meeting later that Monday afternoon. One of my colleagues confessed—with tears and anguish—that the drill we had was terribly disturbing. The implication of this drill is that if anyone fails to “do this right,” then we will endanger our students. If I fail to lock the doors and get us to huddle in the correct corner, or if my classroom has too many windows and the blinds are not fully shut, then I could be the cause of my students’ deaths. This confession was heartfelt and vulnerable. My colleague’s greatest fear is that failing to do things right in an active shooter situation would allow a student to die—the worst thing imaginable for those of us with young adults in our care.

There were many responses to my colleague’s confession. Many of us tried to offer constructive criticism. (Which dean should be given this feedback that the drill might have flaws?) Many speculated about actions in particular scenarios. (What if a student decided to flee the room? Should we stop them?) Some offered action plans. (Take charge of the room! Use a baseball bat; crazed shooters are best stopped with blunt objects!) At our best, we hugged my colleague, cried too, and handed out Kleenex.

Very little of my department’s discussion was about how Christians should respond to an active shooter—and I would charge that this is true of our whole campus. Doing drills to anticipate an attack on our campus is a basic reality of 21st century higher ed. I acknowledge this as someone whose cousin was a student at Virginia Tech during the mass shooting in 2007. Suzanne, my cousin, was a friend of one of the victims and moved off campus for the rest of her collegiate career, barely finishing her degree after the trauma of losing a close friend to senseless violence. I am not writing to say that we shouldn’t do drills or that we shouldn’t have public service videos that help us think about how we might respond during one of these awful events.

What I am suggesting is that videos that tell us how to hide, run, and fight back, and drills that teach us to lock doors, huddle up, and shut blinds will not save us. If someone really wants to attack our campus, they are just as likely to kill us when we are huddled in the corner of a dark classroom as when we are running away, or fighting back, or doing whatever we think of during an intense moment of panic stricken activity.

So what am I advocating?

We like to talk a lot at Whitworth about being a Christian community. I am unconvinced that this is true. We more often seem to be an educational business with some accents of Christian language that serve as our special brand. As such, we prepare for an active shooter like most other higher education businesses: campus alert systems, drills, instructional videos. If a shooter does come, at least we can’t be sued by aggrieved parents because we fulfilled our legal obligation to demonstrate “preparedness.”

If we were a Christian community we might approach this social problem differently. We might begin by asking who God has called us to be and whether God’s people might base our response in something other than self-preservation. It is certainly possible that locking the doors and turning off the lights could protect some innocent lives. It is also possible that arming all faculty could also protect some innocents. It is just as possible that the lock and huddle approach could be anticipated by a creative assailant and be the most dangerous thing we could do, just as it is possible that armed faculty could lead to more unwanted deaths. These “action plans” are all too often based in a belief that death can be avoided and that the correct action will save us.

For Christians, only Christ saves us—not our best actions. What Christians profess is that death is not something to fear. God in Christ has already overcome death, and the way that we live speaks to the way that God wants all people to live under God’s rule. Those locked classroom doors seem to me a very limited comfort, even in the best of scenarios. God’s promise to be always with us even in our gravest moments is far more trustworthy. If we decide to eliminate all of our classroom windows, form bigger barricades to campus, install metal detectors around our dorms, or treat every campus space like it is an airport terminal, we fundamentally change our environment and become a place where self-protection outweighs being the people we believe God has called us to be.

I suspect that I have not been trained well enough to know how I would respond during an actual active shooter situation. What I hope is that some of my deepest training would come through. I’ve been trained to pray even when I don’t feel like it by my regular participation in liturgy. I’ve been trained to offer confession and ask forgiveness which puts me on a level playing field with scared students and people who want to harm us. I’ve shared in the communion of God’s body and blood which makes me united with others and with God—and reminds me that bloody death is nothing new for Christians. I’ve been baptized and remembered my baptism, which means that the spirit has sealed me over and against my other allegiances—even allegiances to self-protection and self-preservation.

I do not think that I have any special skills to protect a group of my students under threat; but I do think that being Christian would allow me to be present with my students in a time of suffering, remembering that nothing can separate us from the love of God in Christ. All too often we live by clinging to the myth that we will get out of life alive. Active shooter scenarios challenge this myth, because even the survivors may struggle with grief and trauma that makes them feel less alive.

Enduring suffering, being killed for others and for my faith without using violence in return: this the supreme form of Christian witness. It is the simple, literal meaning of the Greek word “martyr”—witness.

If Whitworth wants to be a Christian community, it might put aside this talk of drills, preparedness, and protection, and speak instead about martyrdom. That’s how Christians talk.

Charles Andrews is Professor of English at Whitworth University and the author of Writing against War: Literature, Activism, and the British Peace Movement (Northwestern University Press, 2017).

Previous Ask An Atheist: Why do you pose ‘annoyingly hard’ questions to Christians?
Next Next Coffee Talk to feature “Ask” columnists

This is masterful. Thank you so much for this, Casey.

A community vigil, fighting Islamophobia and our "Ask" features were some of the top FāVS stories of 2018 - SpokaneFāVS