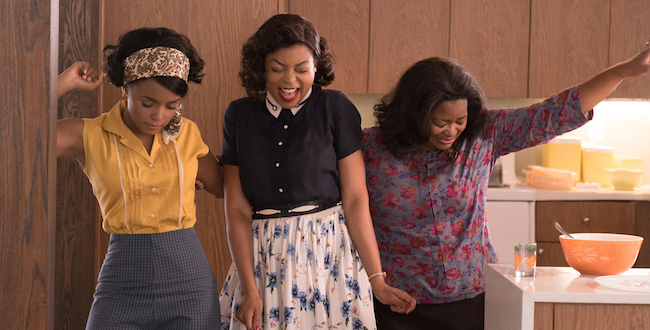 From the "Hidden Figures" trailer

“Hidden Figures” is Oscar Worthy, to say the least. It features stunning performances from a great cast. It is a true story with heroes who live in the everyday world. My 9-year-old son also loved the movie and was riveted the entire time.  As I watched the movie, I thought how much better it was than most science fiction films I’d seen because here were real people triumphing to make their dreams come true, to change our world for the better. Not just changing our world for the better in technology and space race, but for the rights of black women, to be acknowledged as equals in the very white world of NASA at the time. The question you may be left with after the movie is: “Why don’t we learn more about these women in school or history books?” Answers to that later.

The movie follows three geniuses at NASA in the West Computers in the 60s during Kennedy’s presidency and the Space Race. The West Computers are a division of black women geniuses and mathematicians doing various jobs as needed around NASA. Each hopes to find permanent work. The three main protagonists are Katherine G. Johnson as portrayed by Taraji P. Henson, Mary Jackson as portrayed by Janelle Monae and Dorothy Vaughn as portrayed by Octavia Spenser. Each woman has to deal with segregation and social aggression on her way to being where she wants to be. Each woman faces a different challenge. Dorothy Vaughn goes to a library to learn how to program the new IBM computers that will be taking not only her job, but the jobs of every woman in the West Computers if she doesn’t train and teach them. It is a horrible thing to see that she is told she can’t be in a library, that it is for whites only, and see her get thrown out. How she handles it however, is a must see.

Mary Jackson is encouraged to apply for an engineer position by her supervisor, Karl Zielinski, who tells her if he survived the Holocaust to be a rocket scientist, then she too, can do the impossible as a black woman and be a rocket scientist. While he encourages her, and is supportive, there is no doubt it is Mary’s decision. Mary does win her spot after getting a court date.

Katherine Johnson carries the main narrative of the film. She is sent to work in what is regarded as the highest office in NASA, with the head engineers working daily to get into space ahead of Russia. Katherine isn’t allowed by her co-workers to drink out of the same coffee maker. It takes Katherine 45 minutes a day to run to the bathroom and back to her desk because she is told there are no bathrooms for black women in the building where she works. Eventually, when Harrison asks her where she has been she lets everyone know how unjust the conditions are.

She leaves, taking her dignity and pride. The next thing we see is Harrison passionately and personally removing the sign reading “Colored Women” over the bathroom Katherine has to use every day. He tells everyone there will be no more bathrooms for people or color or white people, just bathrooms everyone can use.  This moment, though, showing what allies can do, never makes the story about Al Harrison. This is another achievement of “Hidden Figures.” Al Harrison may be the head engineer, but the story is never about him. It shows how everyone works together.

As to the answers regarding why we aren’t taught more about women like Dorothy Vaughn, Katherine Johnson and Mary Jackson, it is the same sad, insidious reasons that tried to keep these three amazing women from helping America get into space. Yes, that same spirit of segregation, hiding history and figures like them and pretending they don’t exist. We don’t live in a post-racial era. We’ve come a long way, but until we learn equally about amazing people of color in our history the way we do white people, we are still living in this overarching racist structure. This movie is all about how what we do affects the generations to come as well as ourselves. So let’s choose to continue to support and see films like this, educating future generations, making our country the best it can be. Let’s continue to see such portrayal and representation of such role models, in our movies, of scientists who also have faith, in themselves, their spirituality, their community, family, loved ones and their dreams.

Welcome! It is amazing!