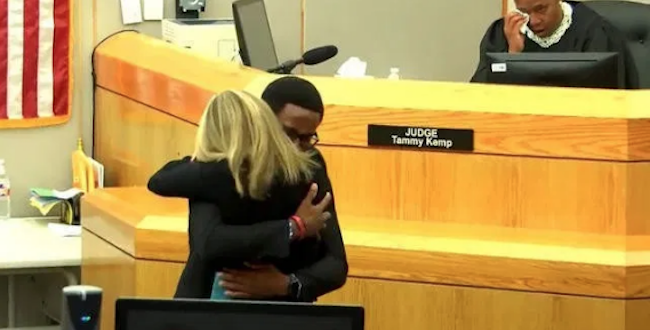 We Need Justice and Forgiveness

He has shown you, O mortal, what is good. And what does the Lord require of you? To act justly and to love mercy and to walk humbly with your God. – Micah 6:8

“To err is human; to forgive, divine.” – Alexander Pope

By now most of us have seen the touching act of forgiveness that Brandt Jean, the younger brother of Botham Jean, offered Amber Guyer, the police woman who shot and killed Botham in his own apartment.  This followed her receiving a sentence of 10 years for murder.

It was a remarkable and moving act of love.  Here was a man who had suffered an unimaginable loss at the hands of someone who had taken an oath to serve and protect. He stated that he loved Guyer as a person and that he did not wish anything bad to happen to her. His action was driven by his Christian faith and his obedience to Scripture.

Since this event, many people have written about this exemplary behavior as something we should all strive for. In the process, however, two aspects of forgiveness and justice have been overlooked.

First, forgiveness and seeking justice are not the same thing. While they are both other-regarding and virtuous, there are important differences.

When we witness injustice – those with more power mistreating those with less – we experience righteous anger.  These emotions tell us something about our the moral state of our community and prepare us for the hard work and patience required to bring hope to the marginalized.

Forgiveness, on the other hand, is not an emotional response to an event.  Forgiveness is volitional and involves overcoming emotions of anger and resentment.  Forgiveness is hard work, and a process that may never end depending on the seriousness of the injury and the contrition of the perpetrator.

Just because Brandt forgave his brother’s killer does not mean he is completely free of anger.  Humans can fully overcome physical pain to a point where we don’t remember the experience. Emotional pain, on the other hand, can resurface without warning and bring us right back to the point when it occurred. Forgiveness involves moving past that pain more than once.

Forgiveness is also personal. We don’t forgive systemic racism, but we can forgive those who exhibit racist behavior toward us.  The forgiver is also the one who is unjustly injured; while a white ally may experience righteous anger in response to Jean’s death, to say that they do or do not forgive Guyer is unfitting.

A second thing to note about justice and forgiveness is that one is not more important than the other.  In a recent article in the Spokesman Review, the divinely inspired act of forgiveness is contrasted with the palpable anger outside the courtroom that occurred in response to the relatively short sentence Guyer received (sentencing guidelines were between 2 and 99 years). The author states, “those chants of “No justice, no peace!” are understandable and unsurprising. But frankly they’re not quite right – not when exposed to the light of true forgiveness. Brandt Jean’s selflessness last week suggests this corrective: “No forgiveness, no peace.”

For some readers this might seem like a jump to forgiveness without fully embracing justice. In fact, not everyone saw Jean’s act of forgiveness as moving, but rather as just another instance of Blacks forgiving Whites for bad behavior while witnessing no change in systemic racism. Jemar Tisby, a Christian African American historian and writer stated in the Washington Post, “we have a right to be angry, a right to grieve, and a right to want justice.”

I agree. This is not the time to stop being angry.  While the conviction of Guyer for murder was an important step toward righting past wrongs, it is not the end of the conversation.  There are many families, including those of Philandro Castille

and Tamir Rice, who have not seen justice served.

People are sometimes told they should “forgive and forget” and move on. They are told “that’s what Jesus would do.”  But sometimes what people are really being told is to put forgiveness above justice; it can be a manipulative move by those more powerful.  The truth is that as we work toward forgiving our oppressor we can simultaneously demand justice.  Jean’s father expressed this when he said he also forgave Guyer but wished for a harsher sentence.

Forgiveness is transformational. Resentment toward the perpetrator is gradually replaced with undeserved compassion, generosity, and love.  Brandt Jean stated that not only did he not want anything bad to happen to Guyer; he wanted the best for her.  For Brandt, this means Guyer giving her life to Christ.  Both he and his father hoped for something better for her, and perhaps through this act of forgiveness Guyer will become a voice for the oppressed.

There has been a great deal of coverage of Jean’s act of mercy, and rightfully so.  To see something so rare and divinely inspired is an act of beauty; it reminds us that in spite of our capacity to do harm to others we are also able to show tremendous love.  However, the feel-good moment of forgiveness cannot overshadow the need to continue to strive for justice.  Both justice and forgiveness are necessary for peace.