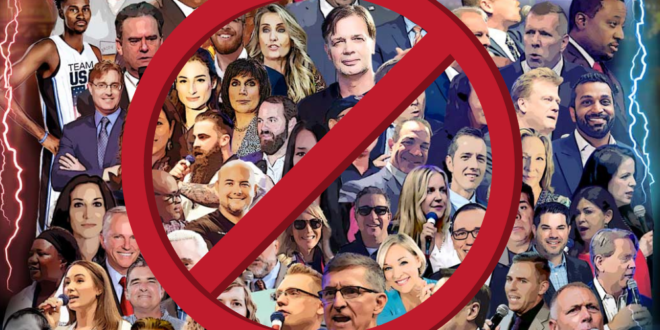 We Do Not Need This Re-Awakening

We Do Not Need This Re-Awakening

The loonies are coming.

And as often as the public is warned of their dangerous agenda, thousands will crowd into the Stateline Speedway event center in Post Falls this weekend for the Re-Awaken America tour, a far-right political event that cloaks in ridiculous evangelical fervor an agenda aimed at restoring Donald Trump to power and sending to the sidelines all heathens who reject their pseudo-Christian lunacy.

Controversy has followed the tour wherever it has appeared, with virtually all mainstream religious institutions condemning its purpose.

That is the case in our area, as reported in this recent FāVS news report.

The tour organizers include convicted Trump felons Roger Stone and Michael Flynn, Trump son Eric, and the My Pillow nutjob, Mike Lindell. Those four lead the “Trump was cheated” mob and continue to demand his reinstatement as president.

Other organizers promote the idea that true Christians – as defined by them – need to stand up and take back America while awaiting the savior’s return. They call themselves Christian patriots but what they advocate is not patriotism, is not Americanism, but is theocratic revolution.

This is in-your-face Christian nationalism, defined by the group Christians Against Christian Nationalism as “a political ideology and cultural framework that seeks to merge American and Christian identities…The markers of this ideology tend to be mythologizing America as a ‘Christian nation,’ exaggerating American exceptionalism, and emphasizing God’s providential hand in American history and present politics…Christian Nationalism ‘often overlaps with and provides cover for white supremacy,’ which fundamentally poses challenges to pluralistic democracy and religious freedom.”

Mainstream news organizations have written extensively about the Re-Awaken tour. One of the best accounts appeared in New York Magazine in May and notes the inescapable connections between the tour and Q-Anon, the notorious lunatic, far-right conspiracy site.

So, in addition to the aspiring political demagogues and the Christian nationalist patriots, the tour includes people peddling dangerous alternative COVID cures while declaring that COVID vaccines are preparing our bodies for demonic possession, arguing that demonic gays and lesbians are trying to pervert our children, that the deep state will attempt to arrest and persecute Christians while taking their guns, and others saying Jesus will save us from the demon Moloch and his evil pedophiles who have been controlling the world for thousands of years.

Wrote Laura Jedeed in New York, “If this all sounds like crackpot ravings from the very edge of society, you would be only half-right. This event may have more tinfoil per capita than a Reynolds Wrap warehouse, but it is anything but fringe. The speaker roster includes New Age healers, conspiracy podcasters, and self-declared prophets as well as trusted members of Trump’s inner circle.”

Yes, it is all so crazy, until you realize there are millions of Americans who believe this BS.

After posting a comment to the original FāVS news report, I heard from several.

America has fallen away from God and Jesus and so true Christians must take control of the government in Jesus’s name until he returns, wrote one correspondent.

I should attend and be saved, wrote another.

I have heard that message before, for much of my life. In such evangelical circles, the only path to heaven is through Jesus. A person who is saved has declared a personal relationship with and commitment to Jesus and so has punched a ticket to heaven on the savior’s return.

The rest of us are to be condemned to the fiery furnace.

When religious zealots create two classes of people, the saved and the condemned, they are saying implicitly if not explicitly that the condemned are to be discarded, or worse, eliminated as one would eliminate a cancer on the earth. The condemned are servants of the demon Moloch, without redeeming value. Jesus loves you? Well he loves only some of us, apparently. The demon unbelievers will be destroyed by his fiery sword (with Donald Trump at his side).

Non-Christians understand this. We have been living with the “be saved or be condemned” nonsense for most of our lives.

But a theology once relegated to door-to-door evangelism has moved into the political mainstream, connected to self-serving felons who seek political power and are using evangelical fervor to achieve their ends.

This is scary stuff.

And I have no answer for it.

Zealots, religious and political, are beyond the reach of reason. The more you confront their fanaticism with fact, the more deeply they hold to their resolve.

It is only slightly comforting to hear mainstream religious organizations condemn the Re-Awaken tour. But their condemnation only serves to convince the tour’s camp followers that the devil and his demons have hijacked mainstream churches.

So, the tour will pass through our region this weekend, unimpeded. Hundreds, maybe more, will be “saved,” will be further convinced they are battling Moloch for the soul of our country, that Donald Trump and Jesus are marching hand in hand to save the nation.

May Moloch help those of us who stand in the way.

Previous Racial justice and transgender awareness author to speak in Spokane, Pullman & Moscow
Next Features of Online Dating for Christians