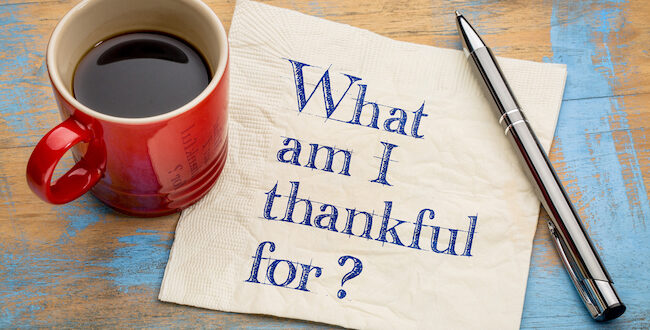 What am I thankful for? A question in handwriting on a napkin with a cup of coffee/DepositPhoto

This is my Thanksgiving holiday column.

My glass will be more than half full. I will be cheerful and optimistic. The year 2020 will be in my rear-view mirror.

I will write all this because I have been asked to do so by my wife, Carla. She is the love of my life. I adore her. More importantly, I respect her. She is a great editor, one of the best.

And she wants me to write something positive, what she calls my change of pace.

“Can you write a column without ever using the word ‘but’?” she asks.

So, let’s make this a holiday drinking game. From this point on, whenever you see the word “but” in this column, take a drink of eggnog. If your cheeks are rosier than your outlook at the end, you will know I failed my assignment.

My original holiday column was not about the holiday at all. Sunday was the 57th anniversary of the Kennedy assassination. I took the opportunity to write about the moral rot that has been the hallmark of our political system – and a big part of our presidential history – in the decades since.

Carla took my draft column into another room to give it a good read, mostly so I would not see the look on her face. She came back and tossed it at me, clearly exasperated, struggling to say something critical, harsh even, an unfortunate holdover from the days when I was her boss and open criticism carried some risk. Still (see what I did), we are married now. Criticism is part of the marriage contract.

She was edgy, agitated, even a bit angry.

“Can’t you ever say something nice? No, you can’t,” she said. “I’m still an optimist. This is Thanksgiving, for heavens’ sake. Be nice. Be an optimist. I still think our system works, will work. If we were all as dark as you why would we bother to go on?”

Of course, I can go on and on when it comes to documenting political darkness. And the thinking behind Thanksgiving does run counter to my cynical, journalistic soul.

Still, she has a point. My dire election predictions have largely proved wrong. I am still worried for the immediate future though, dare I say it, I am more optimistic about the outcome with each passing day.

Still, what can we be thankful for as this dreadful year nears an end?

“What about…” I responded.

“No buts,” she said. “You have your health. And I have a job. And your kids have jobs. BE THANKFUL!”

I know the Savalli-Smiths have been lucky during the pandemic. Even political upheaval has failed to darken our home life except for those times Carla demanded I not talk politics.

If I raise my head above the gloom long enough, I can be thankful for the love of my extended family, for close life-long friends, for the friendship of former colleagues, and the remarkable friendship of my former students.

I can be grateful for having food on the table, with a 16-pound turkey waiting in the refrigerator. I can be thankful for jellied cranberry sauce and Cyrus O’Leary pumpkin pies.

I can be grateful the pandemic has merely disrupted college football. My beloved Oregon Ducks are on a three-game roll.

And let’s be honest here. I can be grateful that my liquor cart holds several bottles of fine single-malt Scotch and my humidors are filled with outstanding smokes just waiting for warm spring afternoons on the porch.

I’m guessing most of you can find things for which you can be thankful. Your lists will be different, of course. Maybe there is someone in your life who can push you as Carla pushed me.

All of us, as we always do at our Thanksgiving dinners, can stop to remember those who cannot be with us, whose memory remains a blessing. We can be thankful even as we grieve.

Carla wins this one.

Oh, you can have a sip of that eggnog now.