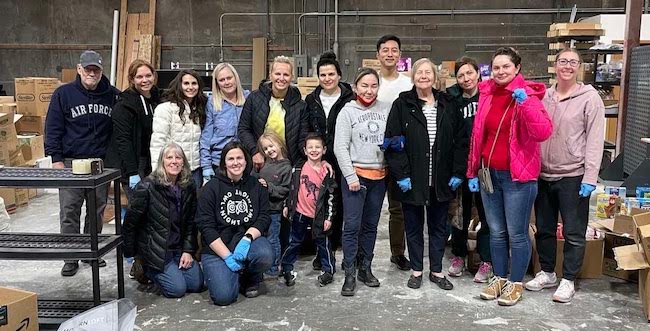 ‘We are praying non-stop’: Local churches support Ukraine with prayer and supplies

‘We are praying non-stop’: Local churches support Ukraine with prayer and supplies

Local Ukrainian churches have responded to Russia’s invasion on Ukraine not only with prayer, but also through fundraising and collecting relief supplies to help those affected in the invasion.

Boris Borisov, a Ukrainian and lead pastor at Pacific Keep Church, said they have been organizing prayer nights, vigils and task groups around issues of need they hear firsthand. They have been praying for the safety of people trying to find shelter or flee.

Aside from prayer, Borisov said they gathered a group of 20 Slavic leaders from around Spokane and parishes and have been coordinating relief efforts to get supplies into Ukraine.

“We are taking requests from churches and Slavic people in Spokane who have connections to churches on the ground in various cities, or are being bombed or are working to give safe shelter to people fleeing bombings,” Borisov said.

Ruslan Tsyoma, a church-goer at First Ukrainian Baptist Church, said they was shocked and no one could have imagined a full-scale military invasion of Russia would begin with the bombing of a hospital.

Tsyoma said his church has responded with prayer and participated with Ukrainians living in Spokane in the city center near the Lincoln Monument in support of Ukraine. Also, during a Sunday service, the church organized a fundraiser to support churches that are helping people, as well as collecting humanitarian supplies.

Pasha Pechenov, a Ukrainian church goer at Pilgrim Church & Calvary Spokane who came to the U.S. with his family in 2000, said local churches are heartbroken over what is happening in Ukraine.

“We are praying non-stop for the people that are affected. Many members of our Slavic community still have family and friends back in Ukraine,” Pechenov said. “Multiple churches have created platforms for people to donate and support people of Ukraine.”

Pechenov said local Slavic churches have put together financial and material resources to support those affected by the invasion. Spokane Slavic Baptist Church put together a “Help for Ukraine” page on their website where people can donate.

On the site, the church said they have been in contact with churches in Kyiv, Vinnitsa, Zaporozhye and Donbass.

Donations are used to get food, medicine and sleeping supplies to those affected, as well as help refugees cross the border and settle into a new place.

Borisov said the group of 20 leaders is also making plans to support Ukrainian refugees if they are able to enter the U.S.

“If that happens we may need to rally the community. We may need help with supplies, clothing, stuff like if we get a stream of refugees,” Borisov said.

Borisov said people of faith should care because innocent people are being killed because of political fights and disagreements of powers-at-be at the top level, and people should care about all suffering.

“If someone has a desire to help or provide assistance, you can contact [First Ukrainian Baptist Church] and we will pass it on to people in need,” Tsyoma said. “But most of all I want people to visit their local churches and thank the Lord for the peaceful sky and remember in their prayers about the people of Ukraine.”

Borisov said people can stay informed on how they can help people in Ukraine by joining the email list on the “Spokane Loves Ukraine” website.

“Spokane has 80k-100k Slavic residents. We are part of your community. We are your neighbors, coworkers, peers and friends,” Pechenov said. “A kind word, some attention and love mean so much right now. Be informed and join us in different ways we can help the people of Ukraine.”

Join SpokaneFāVS at 10 a.m., April 2 for a Coffee Talk on “Standing for Democracy, in Ukraine and at Home.” It will be held in-person at the FāVS Center, 5115 S. Freya St.

Previous Two Years Later
Next Live How You Say You Believe