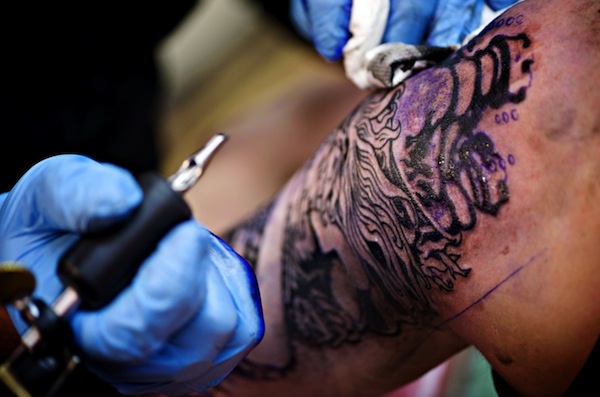 We are all (l)inked together

I read somewhere that 36 percent of the American population has a tattoo.This is a statistic that would have shocked my grandparents to the core. Then again, many things such a large group of Americans now do would’ve shocked them. The reason this statistic is so interesting to me is the accompanying statistic of one in three people who get tattoos regrets ever getting one.

In Herman Melville’s classic “Moby Dick,” the character Queequeg explains that his extensive tattoos are a part of his Maori culture, saying, “We tattoo what is sacred in our culture on ourselves”. A third of the population has taken it upon themselves (no pun intended) to permanently display what is important to them and what they value in life on their bodies. And then, to use Queequeg’s word, they decide that these symbols aren’t “sacred” anymore.

There is a disconnect between our western tendency to be future-oriented and permanence. Most people may not think about five years later when getting a Tweetybird on their ankle, but rather on the personal satisfaction of enduring the experience. I’ve lost count of people I’ve met with Chinese calligraphy on their arms, or Sanskrit lettering beneath their shoulder blades, who have never studied the Mahabharata or are not proficient in Mandarin. The usual response these individuals give when asked about their tattoos is that is meaningful to them. And of course it is. Written in an uncommon language, the individual is sheltered from the outside world and left to privately ponder the memories the inked symbol conveys to him or her.

Today we can decide on an image that suits our fancy at breakfast, be in a tattoo parlor by lunch, and be sufficiently inked by dinner. And then what? Instant gratification is convenient but deceptive in terms of helping discern what are the important, meaningful things in life. Many inked individuals say their motivation is identity-driven, citing their desire to be different. But with so many people being “different”, then how different are they?

I think there is a fundamental need in asking the question, “What happened to authentic community?” Alienation and granfalloonery can be found not only in the inking of skin, but in almost every aspect of modern life. We are untethered from community and, by extension, meaning. On the bus or subway, we see people but do not engage, instead choosing iPods and iTablets over “i-you” conversations. We have been reduced to consumers, stripped of all meaningful commonality and honest relation.

The Archbishop Desmund Tutu speaks about this individuality as the antithesis of community when defining the African concept of Ubuntu:

“Ubuntu [“I am what I am because of who we all are.”] speaks particularly about the fact that you can't exist as a human being in isolation. It speaks about our interconnectedness. You can't be human all by yourself, and when you have this quality — Ubuntu — you are known for your generosity. We think of ourselves far too frequently as just individuals, separated from one another, whereas you are connected and what you do affects the whole World. When you do well, it spreads out; it is for the whole of humanity.”

We can blame this on the usual suspects: globalization, capitalism and the Internet. But I think that, like most problems today, it requires a little more introspection. We allowed this to happen to ourselves. We have forgotten how to be ourselves.

My solution to this current woe is simple: put down your Kindle and talk to your neighbor. Become invested in others and share meaningful discussion with others. I mean on an organic level. By entering into partnership with others, you are connecting to what it means to be human, an integral and irreplaceable part of the human race. This can start with our own “families” and extend to what was long called “The family of Man[kind].” It has no price and no marketing scheme, yet still has immense power. As modern humans, we need to remember that we are all connected, and all part of one another’s existence. And that’s a solution that’s more than skin deep, Queequeg.