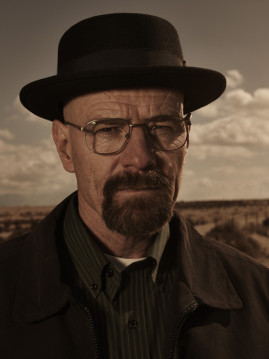 Walter White and the Gospel According to ‘Breaking Bad’

How the morality tale of a cancer-stricken chemistry teacher who transforms himself (first by desperation and then through sheer hubris) into a cold-blooded, Machiavellian drug kingpin will end is what legions of fans of AMC’s Emmy-winning “Breaking Bad” want to know.

But after the first episode of the series’ final season aired on Aug. 11, the answer to what happens to Walter White (Bryan Cranston) remains a mystery — at least for another seven weeks.

Since its debut in January 2008, “Breaking Bad” has taken its audience on a spiritual journey — following Walt’s soul on a slow, steady descent into a hell of his own creation.

“Fleeting moments of possible restoration for Walter occur throughout the series,” Blake Atwood writes in the new book “The Gospel According to Breaking Bad,” which was released as an e-book to coincide with the season premiere.

“These instances can make the hopeful viewer believe that Walter may finally be turning the corner, coming to the full realization of the awesome devastation he’s caused for so long. Unfortunately, fans of the show know that Walter’s doomed,” writes Atwood, who is an editor for the Christian social network FaithVillage.com. “As the series progresses we see Walter grow and decay at the same time.”

“Breaking Bad” is at its heart a story about change: relational, physical, spiritual and moral. The show’s creator, Vince Gilligan, famously said the catalyst for the series was his desire to write a story where the protagonist, over time, becomes an antagonist; where “Goodbye, Mr. Chips” becomes “Scarface.”

Walt is one of the most complicated and terrifying characters ever to appear on television. And what makes him all the more frightening and compelling is that he started out so … normal. Walt is no Tony Soprano; he wasn’t born into a crime family. He was a cash-strapped high school teacher with two jobs, a bossy wife, a teenage son with cerebral palsy, an unexpected baby on the way, and a diagnosis of aggressive lung cancer.

Walt is desperate and takes matters into his own hands, cooking methamphetamine in order to leave his family financially secure after he’s gone. At first, we understand. We might even consider taking epic risks if faced with the same untenable stresses and resources.

But Walt goes too far. He takes more than he needs. He starts acting less out of desperation and more from a toxic dump of bitterness and the kind of pride about which Greek tragedies were made.

He’s become a bully and a thug, a liar and a thief, and a murderer many times over.

So why is there something inside me — inside so many of us who have been awaiting Walt’s return — that wants to see him redeemed?

“Maybe it’s because we’re Walter White,” Atwood writes. “We are all broken bad and desperately in need of redemption, but woefully unable to extricate ourselves from the dire circumstances of our lives. … In Walter White we see the judgment that is rightfully due us, and yet we hope that circumstances or God or the universe or something will intervene before it all goes to hell.”

Walt is fascinated with change. After all, he’s a chemist and chemistry, Gilligan reminds us, is the “study of change.”

“Instead of viewing the world as it is, as inert, unchanging matter, Walter opts to see it as a world in flux, something he can change and bend according to the whims of his vastly superior intelligence,” Atwood says.

Walt isn’t the only one who has changed throughout the five-year tale of “Breaking Bad.” If the arc of Walt’s moral universe is a downward spiral, his sidekick Jesse Pinkman (Aaron Paul) is headed in the opposite direction.

“Just as Walter White veers down a certain path of destruction, Jesse Pinkman, former dropout junkie, becomes the moral center of the show,” Atwood writes. “Jesse may be the one person who’s actually redeemed by the end.”

Jesse’s metamorphosis is from bad to better (if not good). His moral compass, though bruised and battered, still works and, as the final season unfolds, its calibration seems to be increasingly accurate.

“Both of these men are changing, but they’re aiming for opposite ends of the moral spectrum,” says Atwood, who goes on to quote the 19th-century Christian author George MacDonald, who said, “There is this difference between the growth of some human beings and that of others: in the one case it is a continuous dying, in the other a continuous resurrection.”

Will Walt’s story end with the brutal judgment he deserves? Or will there be another unexpected turn in this complex cautionary tale — one that veers toward mercy and the kind of grace that exists outside of karma.

Atwood seems to be rooting for the latter. And if I’m honest, so am I.

“The gospel shouts that grace exists, even for the most diabolical of sinners,” Atwood says. “The story that (God has) plotted out for you from time immemorial to the future date of your passing can ultimately be a good story, if only you’ll allow it to be so.”

(Cathleen Falsani is the faith & values columnist for the Orange County Register. You can follow her on Twitter @godgrrl.)