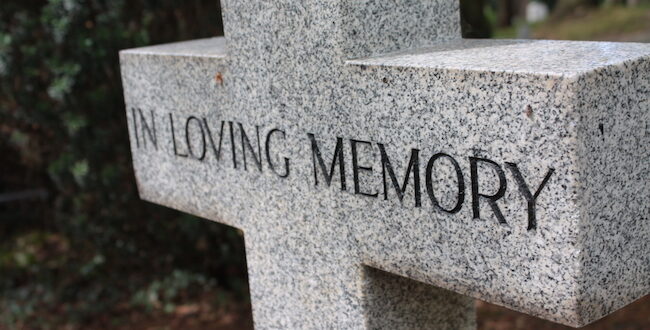 When I was in high school, my parents decided that when they died there would be no funeral or memorial services. They were not regular worshipers, so had no church community. They were also considerate people who just didn’t want anyone to have to go through all that trouble. And I don’t remember anyone in the family challenging that decision.

Fortunately, they revisited that choice later in life — at a time when they did have a church community and also a daughter who was an Episcopal priest. When each of them died, we celebrated their lives, and their entrance into eternal life with family and friends at their parish church, comforted and strengthened by the love of God and the support and prayers of that congregation.

It is so important in my Christian tradition to grieve and also to celebrate together the Easter hope and joy that accompany us through the experience of losing a friend or loved one to death. I empathize deeply with so many who have had to postpone funerals and memorial services during this time of global pandemic to prevent further spreading a virus that has been deadly to some. It can feel like a strangely incomplete place—odd and disorienting.

I also am one who has lost three dear friends, all priests of this diocese, whose memorial services have been put on hold until it is again safe to gather.

Christine Soule died Jan. 20 after a brief, but intense illness and her memorial service was scheduled for March to accommodate travel plans from far-away family and to get beyond ‘snow season,’ for those closer by. Christine served at St. Paul’s, Cheney and had been a therapist with Lutheran Social Services. She was a generous and loving woman who was a mother and grandmother.She was an advocate for many and was also a cheerleader of sorts to the students at Eastern Washington University who were part of her campus ecumenical ministry group. She radiated energy and love for her own family and her church family.

Andrea Bowman, who had served congregations in Ellensburg and Roslyn after a teaching career at Central Washington University, died April 5 of the Coronavirus. Andrea was known both for her intelligence and her incredible sense of humor. But courage was also a strong suit.

About 12 years ago she underwent a double lung transplant that saved her life. True to form, she named her new lungs ‘Philip and James’ because her surgery took place on the feast day of Saints Philip and James.

My friend and ministry colleague Bill Ellis joins this group as well. Bill died unexpectedly in his sleep in April  at his home in Bend, Oregon. He was  Dean of St. John’s Cathedral for 11 years, retiring in 2017.

When Bill was called I was serving part-time at the Cathedral and was also the diocesan staff  member who assisted churches when they called new clergy. I had a front-row seat as he and Beth, his spouse, accepted the call and moved to Spokane.

We enjoyed ministry at the Cathedral and also in diocesan contexts over the years. I admired the deep store of knowledge that he carried into teaching, preaching and occasionally debate. And I also loved his quirky sense of humor, his undying loyalty to the Oregon Ducks and his pastoral kindness.

Of course the deaths of all of these people who were friends and colleagues of our diocesan clergy and beloved leaders of congregations have touched our diocese deeply. These priests and their loved ones continue to be remembered in our prayers.

They now rest in peace.

Some day soon, I hope, we will be able to gather, pray our prayers and remember the lives of these  and many other servants of God who, “having finished their course in faith, now find rest and refreshment.”

The Rev. Canon Kristi Philip is an assisting priest at Cathedral of St. John the Evangelist.

Previous Importance of Brother and Sister Relationship
Next Ask A Quaker: Quaker Silence