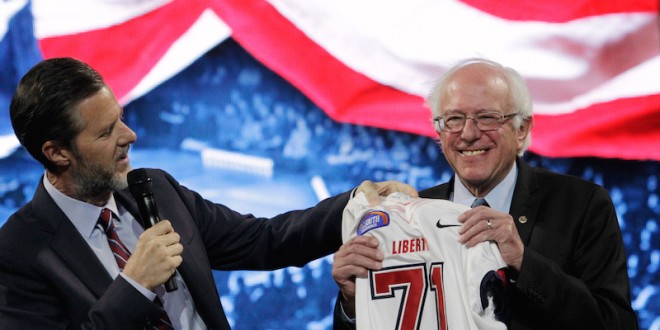 Voters warm to candidates who are not religious

(RNS) On the growing list of ways the “outsiders” election of 2016 is upsetting conventional political wisdom, here’s a new entry:

A contender’s lack of strong faith is not the deal breaker it once was for voters, according to a survey released Wednesday (Jan. 27).

The “Religion and Politics” survey by Pew Research even finds Americans have a kinder view of atheists as potential presidential timber than before. The share of Americans who said they’d be less likely to vote for an atheist is down from 61 percent in August 2007 to 51 percent in the new survey.

“Religion, by and large, remains an asset for potential political candidates,” said Greg Smith, associate director of research and an author of the Pew report. “Far more people say they’d be less likely to vote for a hypothetical candidate who doesn’t believe in God than would vote for one that does.”

Yet they’re much less concerned that candidates mirror their own personal religious convictions.

And that can make a difference for candidates such as Democratic contender Sen. Bernie Sanders, who is proudly irreligious, or Republican Donald Trump, who is nominally Presbyterian.

Past Pew surveys found that 7 in 10 Americans said it was important that a president have strong religious beliefs. However, the new survey of 2,009 U.S. adults, conducted Jan. 7-14, asked a different, related question instead, said Smith.

“We asked, ‘How important is it to you to have a president who shares your religious beliefs?’ And that turned up much smaller numbers,” he said. It was very or somewhat important for 64 percent of Republicans but for only 41 percent of Democrats.

How much a candidate’s religion or religiosity matters is only one consideration that people take with them into the caucus room or the voting booth, said Smith. “There are other things they care about more.” Hot topics in the 2016 campaign include the economy, foreign policy, taxes, terrorism and climate change.

Signs that voters respond to a matrix of issues, not only one, already were evident in 2012, said Smith. Evangelicals, who fretted during the primaries about Gov. Mitt Romney’s Mormon faith, set that concern aside to vote for him in the race against Barack Obama, a mainline Protestant.

Neither do voters care deeply about a candidate’s theological sophistication — whether Trump says “Two Corinthians” instead of Second Corinthians or his rival, Texas Sen. Ted Cruz, admits he failed to tithe, or give 10 percent to charity, like a proper Southern Baptist.

Trump, as one might expect of the high-profile business magnate with “HUGE” self-regard, breaks new ground in this survey, said Smith.

He is viewed as a potentially good, even a great, president by many Republicans overall (56 percent), the survey found — despite a high share of GOP voters who don’t see him as religious.

“That’s a different pattern than you see for any other candidate,” Smith said.

For white evangelicals, the largest single bloc of GOP voters, it’s a statistical three-way tie. Roughly 6 in 10 see Trump, Cruz and Carson as religious. Only 44 percent say so for Rubio, a Catholic who recently released an ad touting his Christian faith and promoting salvation through Christ.

However, the report also points out considerable wariness about Trump among evangelicals: 29 percent said he would be a “poor” or “terrible” president, which is roughly twice the share of those who say this about Cruz or Carson.

Among Democratic front-runners in the 2016 race, the survey came up with some curious findings.

Previous On Feb. 1, let’s come together for peace
Next Upcoming exhibit at Whitworth- Gala Bent: Everything Seems to Be Coming Together