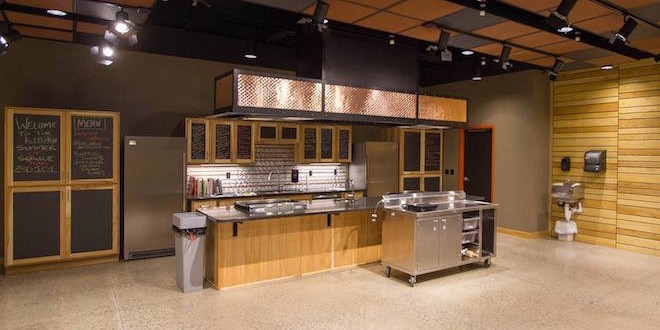 The idea for Nepali Women’s Cooking Night was an accident. When Anna Brekken, volunteer with World Relief and Refugee Connections, went to a neighborhood potluck Nepali and Karen (an ethnic group that makes up about 7 percent of Burma’s population) refugee communities were hosting with the Spokane Police Department, she wasn’t planning to start an event.

But when she saw and tasted the local dishes the women brought, Brekken knew more people had to try them.

“I was thinking, I’d really like to learn to cook this, and I’d like it if these women could teach me,” she said.

The food bank recently opened a state-of-the-art kitchen and teaching facility that they plan to use to host community classes like Brekken’s, as well as for cooking demonstrations and recipe testing.

“We just completed it in July, and it was about a $425,000 project,” Meuer said. The kitchen is designed to promote ‘health and wellness’ in many ways.

“The first and most obvious is scratch cooking lessons,” he said.

Second Harvest distributes enough food to feed about 55,000 people a week in 26 counties throughout Eastern Washington and Northern Idaho, Meuer said. But many people, especially children, haven’t tried a wide variety of fruits and vegetables and tend to avoid those items at the food bank because they don’t know how to make them. Part of Second Harvest’s mission includes nutrition education.

“To us, that really means encouraging them to consume enough fruit and vegetables every day, to consume a variety of foods,” Meuer said. “There’s a lack of cooking skill in a lot of homes for a lot of people. It’s not that they can’t [learn], because it’s pretty easy, it’s just that they’ve never had an opportunity to learn.”

Second Harvest will handle registration for the classes and help promote them, Brekken said; since the food bank already has a steady class lineup, it makes for an ideal partnership.

Sharing recipes isn’t just for aspiring cooks – Brekken hopes mingling with the community will benefit the refugees as well.

“A lot of times these women, when they come here, they don’t really get to get out and meet people and be part of the community,” she said.

“It’s a way to empower them, get them involved, get them out of the house,” Bondarenko said.

Refugee Connections plans to provide interpreters to the classes to overcome any language barriers.
“There’s also the language of gesture and the language of the kitchen; you don’t need much,” Bondarenko said.

Tentatively on the menu for the Nov. 20 event is dal, a type of lentil soup, curry made with tomato, cauliflower and potato, basmati rice, and Chai tea.

While Brekken and Bondarenko hope people come away with new recipes for their repertoire, they’re most interested in building connections between the Nepalese women and the community.

“I think refugees are some of the most resilient people you’ll ever meet, and they’ve been through a lot,” Brekken said. “Most of us have a very safe life here; I think the least we can do is reach out to them.”

Bondarenko, a former refugee from Kurdistan, has worked with refugee-related nonprofits for the last nine years. Because of her past, she relates to refugees she meets through work and is frustrated with the stereotypes people often associate with refugees; one she hears often is that refugees come to the United States and live off the welfare system.

“That’s really frustrating, because refugees are one of the hardest-working communities in Spokane. Even if they get assistance, they quickly go back into the workforce and contribute,” she said.

“People are just afraid of what they don’t know,” Brekken said. “If they got more information and took some time to look up why people are leaving, [they’d] realize these people are just like themselves. They go to school, they go to work, and they play games with their kids.”

Besides the Nepali Cooking Night, Second Harvest has several upcoming classes open to the community that are either free or low-cost, Meuer said. Scratch Cooking Techniques debuts on Tuesday (Nov. 3), and Soup’s On and Pass the Casserole is planned for Wednesday. To find out more, check out Second Harvest’s Kitchen classes and events page.

The Kitchen at Second Harvest