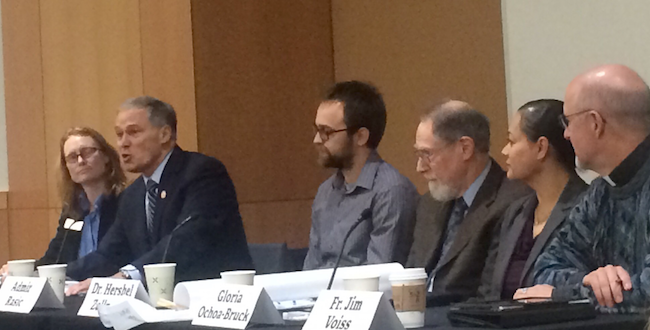 Inslee pointed out the country’s diverse ideologies but said that the inability to share a common reality when engaging in debate reduces democracy’s efficiency.

“Freedom of speech and freedom of religion work best when we have a common set of common facts,” he said.  “And this is what is really at risk right now.”

While Inslee believes good journalism is imperative for our nation’s success, he also sees room for improvement.

“Never in our life, or my lifetime certainly, has the profession of journalism been more pivotal and more important, and more threatened, for instance, because of the economics of the media today,” he said.

The press conference for journalism students was inspired by Spokane Faith and Values’ latest Good Neighbor Conference and tomorrow’s Coffee Talk on ethical and effective protest.

Rasic added his own reality as an immigrant to the discussion. He fled persecution from Bosnia as a refugee and made Spokane his home in 2000.

He admitted that there is a problem with the way Muslims and other immigrants are portrayed in the media.

“As a Muslim, what I recognize is that, especially in the media, there is the normalization to marginalize Muslims,” Rasic said. “What we don’t see very often are stories about American Muslims, people like me. Whenever I look at the news…the story of Muslims is that…they have a different culture and everything is different about them.  But that’s just, again, not the facts.  Most Muslims in America were born in this country.”

He also advised journalists not to settle for “cheap headlines” and interviews with outrageous subjects. There is unlocked potential for them to focus on profiling local people and forming relationships with different people, Rasic said.

“It’s so much harder to hold prejudices or hate another group if you get to know them better,” he said.

Language was a common thread throughout the discussion. Ochoa-Bruck urged journalists to understand the implications of terms they use.

“As an example, when journalists print ‘illegal alien’ versus ‘undocumented person,’ that’s very dehumanizing,” she said. “These are people.”

Voiss added to the sentiments of accepting and understanding those of different backgrounds through Scripture: a letter to the Hebrews. He said the letter speaks to, “a sensibility that was very much a founding of this country.”

“Do not neglect hospitality, for through it some have unknowingly entertained angels,” he read. “Be mindful of prisoners, as if sharing their imprisonment, and of the ill-treated as of yourselves for you also are in the body.”

Much like Ochoa-Bruck, he outlined the ways language can be “used and abused” by individuals, including journalists.

“The terms we use have power,” he said. “The terms you will be using, as journalists, have power.  They have to power to unmask lies but they also have the power to perpetuate prejudice depending on how you use them.”

Inslee closed the panel by reaffirming his love for the First Amendment and journalists, displaying support for university leaders who respect freedom of speech, and supporting environmental protection and the reality of climate change during a Q&A with students.

“We [the state government] won’t be retarded, broken or slowed down by people calling this [climate change] a hoax in the White House,” Inslee said.

Previous Are we confronting our racism?
Next Thanks for a Great Coffee Talk Today on Effective and Ethical Protest