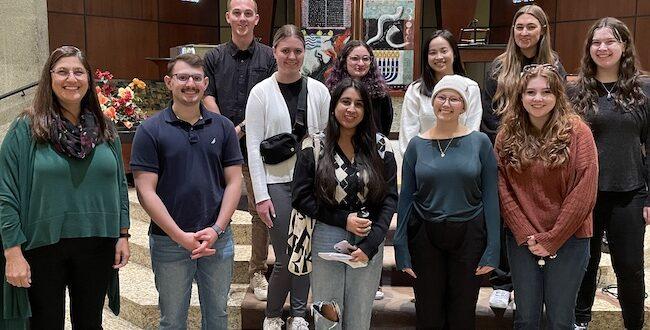 After Kanye West’s prejudiced remarks about Jewish people made waves on the internet, anti-semitism has been on the rise, with The Washington Post reporting that a majority of Americans Jews are fearful of violence against them. This is why I believe it was important that our next field trip for the Religion Reporting Project was to the Spokane synagogue called Temple Beth Shalom.

The Religion Reporting Project is a journalism program at WSU’s Murrow College led by my professor, Tracy Simmons.

When we arrived outside, the doors were locked and we had to be let in by temple staff. The locked doors were a precaution because the temple has a history of being desecrated. There are times when police are present at the temple for added security.

In 2021, red swastikas were painted on Temple Beth Shalom and there have been other instances of the temple being attacked by anti-semitism.

“Incidents of anti-semitism is on the rise in the country,” said Rabbi Tamar Malino during our field trip.

My group and I made our way to the synagogue on Thursday afternoon in October and met with Rabbi Malino who showed us around the temple. We were led to the prayer hall, and we sat in one of the pews where some Torahs were sitting in front of us. The room was beautiful, with the high ceilings and various symbols of Judaism decorated in different places.

Malino, who joined the temple in 2014, is the rabbi for the two congregations of Temple Beth Shalom and Congregation Emanu-el.

Temple Beth Shalom is the Reform congregation and Congregation Emanu-el is the Conservative.

Rabbi Malino said there are three main denominations of Judaism: Orthodox, Reform and Conservative. These denominations have different views and interpretations of religious texts.

We asked several questions about Judaism and the community in Spokane. Our group learned from her that while there are a number of Jewish people moving to Spokane, though some do not affiliate with the temple. However, the membership has stayed stable.

Additionally, the temple has many services and gatherings, which the Jewish community partakes in. One program that fascinated me was the temple’s efforts to help refugees. There was a posterboard which had photos of members of the temple alongside refugees in the community area. Malino explained that there is a program with the temple that assists refugees from Afghanistan who escaped their country after the Taliban’s takeover.

Currently, there are three or four teams who are part of the temple who assist around four refugee families. The teams help the families open bank accounts, take them shopping or assist them with other necessities because they did not speak English when they arrived in Spokane.

When I learned about this service, I was immediately curious to learn about more. I believe that refugees who face devastation in their countries such as the one in Afghanistan deserve a second chance in a safer country.

The trip to Temple Beth Shalom opened my eyes to Judaism and the Jewish community, and I value what I learned so far.

For our next field trip, we will be going to the Spokane Buddhist Temple and I am excited to learn about the religion as I do not know much about it.