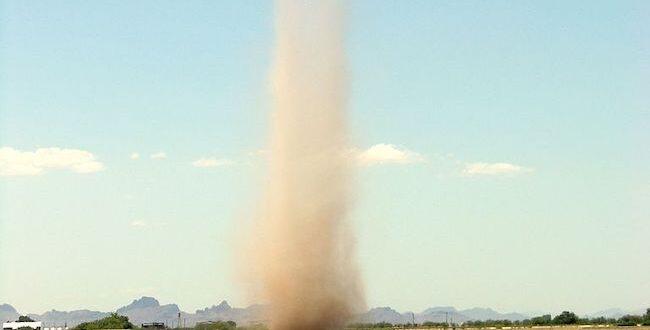 A dust devil in Arizona/NASA

A few Sundays ago, our pastor preached about God speaking to Job “out of a whirlwind” (Job 38:1-7). Why a whirlwind? It’s a question I’ve asked for many years as I pondered this provocative chapter in Job. The image doesn’t fit with our usual thought about whirlwinds (think “tornado”). Massive, violent, destruction results from tornados. But whirlwinds?

God’s whirlwind is considerably different. God took Job on what one writer called “a whirlwind tour of the cosmos,” and ignored Job’s own suffering or fears.

So, what was God’s intent? Well, perhaps God was simply trying to get Job to see that his life suffering is “small potatoes” when compared to God’s intricate creation scheme.

To be more gracious, perhaps God meant to remind Job that human humility is a core value when it comes to God-human relationships: “I’m God, and you aren’t, so don’t pretend you are.”

While our problems — and how we deal with those problems — are important to us, they aren’t as critical as we want them to be in the grand view of life. Ouch, that hurts!

Maybe our over-reaction to that bigger truth-piece is what causes some of us to get violent in word or action. Yet others of us seem grateful that we don’t have to be the world’s problem-solvers. We’re free to choose how we respond!

It’s almost like God is telling Job: “You live in a tornado, Job, filled with destruction that may not be of your making — or perhaps is. But bring me your violent fears, angers and suffering, and I’ll offer you a whirlwind that expands your fuller vision of the world you live in. You decide where you want to live: in a violent tornado, or in a whirlwind where you will once again begin to trust, to have faith in a God greater than yourself.”

That faith is an earthy, self-honest faith. In “Finally Comes the Poet,” Old Testament teacher Walter Brueggemann speaks of Job and faith like this: “…Faith, if it is to survive knowingly and honestly, must live in an unjust world…Job learns that while the world may not be to his liking, the world will hold at its center because it is God’s world.”

Currently, the world is not to our liking either. Violence in thought, word, and deed, is part of that world. Violence, in some form, is part of who we are as human. I hate to admit that of myself, of anyone, but it’s a truth-piece we need to reckon with.

I’m deeply saddened when that hair-trigger demonizes another person.

Mohandas Gandhi observed, “Truth is by nature self-evident. As soon as you remove the cobwebs of ignorance that surround it, it shines clear.”

A reaction of violence is always surrounded by some cobweb of ignorance or another.

Gandhi called violence a “clumsy weapon which created more problems than it solved, and left a trail of hatred and bitterness in which genuine reconciliation was almost impossible.” He wrote of India’s fight for independence decades ago. But his wisdom rings true in the most personal of struggles.

Violence ignores that “your truth” could be as valid as “my truth.”  Violence is a sad and often tragic admission that my reaction to life inside of me has failed to cope with life outside of me.

Violence is a tornado that hasn’t yet allowed itself to meet God’s whirlwind.