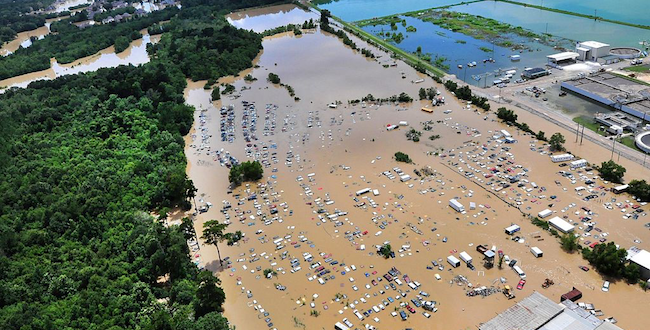 An aerial view of flooding near Baton Rouge/U.S. Department of Agriculture

Viewpoints: Where is God in Natural Disasters?

This month record flooding in Louisiana damaged 146,000 homes and killed 13 people. An earthquake rocked Italy, killing a reported 159 people. Meteorologists are keeping an eye on Hurricane Gaston in the Atlantic and Hurricane Lester in the Eastern Pacific. And smoke from nearby wildfires once again blanketed Spokane.

It prompts the question, “Where is God in natural disasters.”

From a Christian perspective this statement seems to imply that God is NOT everywhere, present, and fillest all things or that he is present and chooses not to intervene for reasons beyond our understanding.  If he is absent in any experience or event, does this imply that God can only be in one place at a time? Would he be God if that were the case?

Might God be viewed as an apathetic God because he chooses not to intervene? If he did intervene would his intervention be like the “enabling parent” who always comes to the aid of their child, rarely allowing that child the opportunity to grow in the experience, regardless of the consequences?

If God were to intervene in every given experience would that not be a controlled environment where we would no longer have a choice or any determination of our lives?

I would say this about God’s non-intervention in most of our life experiences.  From birth to death we look at experiences in life in terms of “good” or “bad.”  I would say that all experiences are opportunities to test and grow in our faith and professed beliefs.

A simple example of this perspective would be the story of the boy who fell off his horse and broke his leg.  Was that experience good or a bad?  Well, I would assume that most of us would say it was a bad experience (or a natural disaster).  Where was God to prevent that and if he was there why didn’t he prevent that?

Now in the meantime, the Army came to town and drafted all the physically able boys who all went off to war, and all were killed.  Well as you can see the fact that the boy fell off his horse and broke his leg and was not drafted into the army saved his life. Now was that a good thing or bad thing that the boy broke his leg?

Where God should be and what he should be doing are not his ways, but unfortunately our ways.

Previous Facebook founder meets Pope Francis. Friendly, if not yet ‘friends’
Next Lessons from Wedding Team 2016