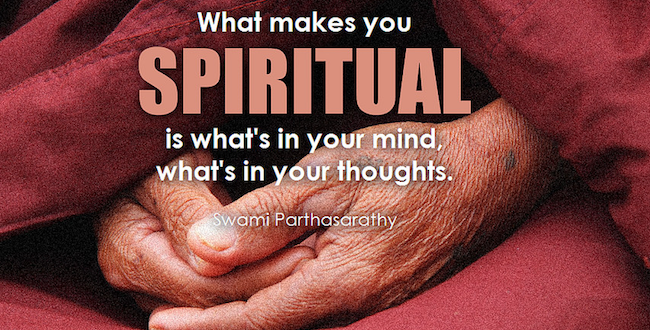 Viewpoints: What is spirituality?

On a recent episode of the award-winning Amazon show “Transparent” a character asks the rabbi what spirituality is, anyway. It’s a word that’s used often, and comes with lots of different interpretations. So we put to the FāVS writers:

How do you define spirituality?

“Spirituality” is a general term that is used in ordinary language for many different emotional states and therefore should not be defined in anything more than general terms unless one is using it for a specific context. As such, it cannot be defined specifically unless a specific context is being referred to. It is not a term like ‘rock” or ‘chair,” that refer to specifics outside specific contexts. At most, one may say it is a term used to describe any combination of emotions involving one’s relationship to phenomenon involving wonder, beauty, one’s valued connection with others, and such. To assume that it refers to some emotional state that is always one way and not another, to use it in a closed instead of an open manner, is to misunderstand the way language functions. That can lead to serious misunderstandings and irrationality. If, when we use it, we are thinking of a specific state, we need to make that clear and explain the context.

Jan Shannon: Too many ‘spiritual not religious’

Spirituality is, first of all, an acknowledgment that there is more to life than we can know from a scientific perspective. Spirituality allows that there is more to being human than being a physical creature, that we each have a soul. We express our spirituality in various ways, each person being drawn by God into a relationship with the divine. With many (too many) people referring to themselves as ‘spiritual but not religious’ the idea that the divine can be understood outside of community has grown, and I believe this is both narcissistic and dangerous. When one decides all by themselves what God is like, it can lead to an utterly selfish outlook on life and unrestrained navel gazing. Even worse, it can lead to the creation of dangerous demigods like David Koresh, Jim Jones, and Charles Manson, among others.  It is only in community that we can even attempt to understand God, as God is inherently communal in nature. It is when we work out our faith in the company of others that we learn what it truly means to ‘love your neighbor as yourself.’

Back in 2006, after attending a presentation by progressive writer and activist Rabbi Michael Lerner, I got into a lengthy discussion with friends about spirituality. I said at the time that for me, experiencing works of art, and particularly films, about which I was and still am passionate, was the ultimate spiritual experience. It’s still true that immersion in a meaningful film can have deep spiritual resonance for me. (“Room,” which won its star Brie Larson an Oscar earlier this year, is a recent example.) But experiences I’ve had in the past decade compel me to expand my understanding and definition of spirituality.

To me, spirituality is the process and practice of understanding oneself better, particularly in relation to other living beings. Meditation, prayer, song, silence, or even thoughtful conversation can feed one’s spirituality. I identify as culturally Jewish but have found more spiritual connection in Buddhist traditions. I think the arts — for me film and music above the rest — can aid a person in their spiritual journey. Immersion in great art can help people empathize more with themselves and other beings — and more clearly understand what life’s purpose is.

Nicholas Damascus: A journey toward the light

In the second Epistle of Christian life, Saint Peter wrote that we are called to be followers of Christ “to become partakers of the Divine nature.”

Saint Basil the Great described man as “the creature who has received the order to become a god.”

Irenaeus, bishop of Lyons in the second century, said that “God became what we are in order to make us what He is Himself.”

Many other church fathers like Justin Martyr; Athanasius, bishop of Alexandria; Clement of Alexandria; and Gregory of Nyssa also made the same proclamation.

Spirituality brings us closer to of an understanding of God and ourselves and our relationship with him. Each person is called to participate with the life-giving and liberating Spirit” in realizing the fullness of humanity is in communion with the father.  The Holy Spirit is the agent of theosis (deification) whose task it is to incorporate us into the life of the Holy Trinity (a community of love).

As we strive to attain this transformation we perceive much more in an elevated understanding, illumination, and insight into our daily experiences.   It’s almost as if we transcend the limitation of the mind of discursive reasoning or rational thought and acquire an expanded perception of our reality of “knowing.”

Is not spirituality becoming something more than what you are?

For me the term ‘spirituality’ points to a deep connection between my inner self, my core beliefs, and my religion.

This is what dictates my right and wrong, gives my moral compass an even keel.