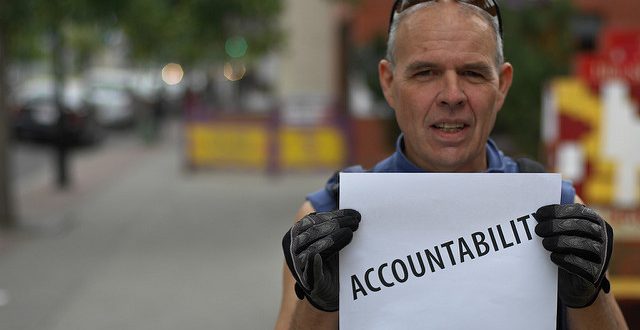 Taking responsibility for your actions can sometimes be quite complex. This week we asked our writers how accountability plays a role in their faith.

Is there accountability of your actions in your faith? If so, explain.

John Hancock: Striving to be accountable to others

I don’t have evidence for or belief in a judgmental higher authority.

But I believe there is an array of better/worse personal behaviors from which we can choose.  Being “in hell” may not have to wait until later.  Conditions like remorse and guilt are built in for us, as higher nature.  That’s what distinguishes us from animals.  Likewise the practices of stewardship, generosity, and compassion create a self-health independent from expectation of heavenly reward.  Darwin gave an explanation about how collaboration builds community resilience.  Long before there were rules-based cultural norms, group survival required cooperative individuals.

As a fledgling teacher at a major university, I observed a very weak system of results accountability for well-known professors, and developed for myself an appetite for accomplishment that was more urgent and noticeable.

Accountability in the present, with persons who count on me and to systems I respect, provides a meaningful existence for me in the present.  I’m often impatient.  That’s both a good and a bad aspect of me.  I get things done, but sometimes I make mistakes.  This feels like opportunity to do better next time, and learn something more about the people I’m with.  This is an outcomes-based experience, rather than rules-based.

Rather than the strictures of any one faith or cultural tradition, I’ve studied the ideas and recommendations of many faiths and philosophies.  I’m striving to be always more accountable and useful, and not waiting until later for my lifetime evaluation.
I’m rarely certain about concepts unseen, and generally skeptical about delayed spiritual rewards promised by humans.

Who needs accountability?   We are all honest and forthright in our daily activity, right?  One would never cheat on their taxes, lie to a spouse, or mislead anyone in a business transaction.  One has always been forthright and presented the whole truth and nothing but the truth, so help you, God, right?

Is accountability just about tearing up with your pillow at 2:30 a.m and feeling remorse or regret over your actions that may have harmed yourself and others?  Oftentimes we avoid the opportunity of dealing with issues in a truthful light, conspiring with ourselves to substantiate our own myths?

Confessing “to another” in a genuine repentant attitude is a way of taking off the chains that would burden us.  One should have a place where you can freely go and confess what you have done and not be judged, investigated, or condemned,  to begin a process of healing.  If you were in a car accident and injured, would you not go to the hospital and seek treatment to get well?

From the Christian viewpoint, when we sin a result of our actions, it hinders our relationships and impedes our freedom.  Sin being like air pollution, we all participate in it, and then we all suffer because of it.  Dealing with the accountability of our sins gives us the freedom to start anew, leading us to restoration.

Even in Buddhism, the confession of sins publicly before Buddha and the congregation by monks is practiced; the phenomenology is the same as in the Church, even if the theology or ideology is different.

As a final note in the Eastern Orthodox Church, the Mystery (Sacrament) of Confession is an imperative in dealing with our sinful actions and accountability in our faith.  Confession is essentially a healing medicine since sin is viewed primarily as a disease, that needs to be addressed and treated rather than a crime that needs to be punished.  It must also be noted that it is in most cases, confession and repentance is not a one-time event, but most often a lifetime struggle.

In James 5:16 “Therefore confess your sins [sinful actions] to one another [accountability], and pray for one another, that you may be healed.”

Andy CastroLang: To whom am I accountable?

First, I am accountable to my conscience.  To the spirit of God within me, that speaks to me in a shout and in a whisper.  That challenges my cowardice and acquiescence to the status quo, and that encourages me to be stronger, braver, bolder than I think I am.  God, who comforts and sustains me, and God, who pushes me beyond myself.

Then, specifically, after accounting for my studies and learning to a bevy of advanced faculty at a duly accredited Reformed Protestant seminary, I am also accountable to the church that sought me out and called me to be their pastor.

I have 200 bosses, we jokingly say at my church.  Because in the United Church of Christ, the congregation decides on the pastor, and pays the pastor, and can challenge the pastor in that pastors preaching, pastoral care, witness, outreach, even the pastor’s self-care. (How are the children? Are you going on vacation?  Oh, how lovely, you are having a date night with your spouse!)

This can be terrible (when a congregation is not supportive or caring, but abusive and divisive) but it can also be very generous and wonderful.

And as if that weren’t enough, beyond the congregation I serve, there is the Committee on the Ministry, a regional representation, which oversees the placement, installation, support and discipline of every minister; licensed, commissioned, or ordained.  They require us to receive Boundary Training every three years; meet with our colleagues every year; report on our well-being and our ministerial accomplishments, joys and trials; every year.

These are the ones to whom I am accountable as I serve Christ and Christ’s church.

I feel great support in these difficult times of ministry because I know I am supported in so many ways.