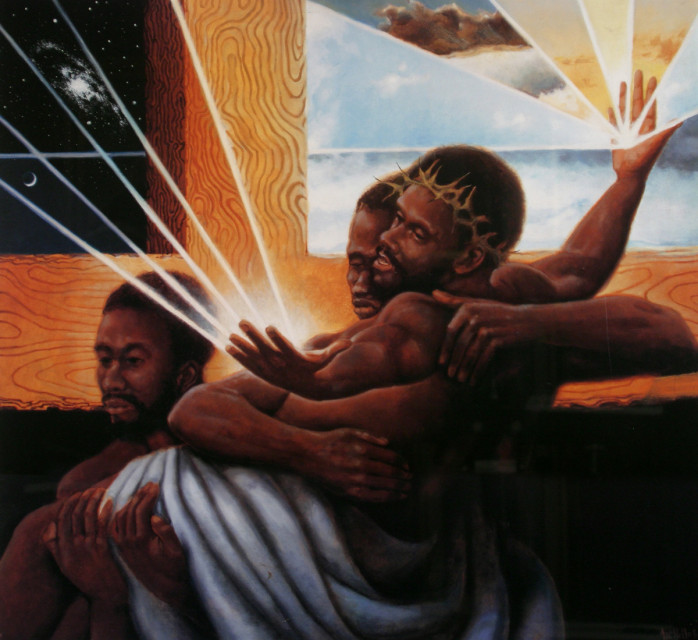 Video and photo slideshow: The many faces of Jesus

(RNS) Hanging in the hallways of Broadway Church, a historic stone structure in midtown Kansas City, Mo., are more than 200 artistic portrayals of Jesus. Inspired by Salvador Dali’s “Christ of St. John of the Cross,” the church’s former pastor, Paul R. Smith, began collecting these “faces of Jesus,” which were mounted in 1996.

The permanent exhibit includes a huge quilt of Jesus on the cross, an image of Jesus laughing (originally published in Playboy), Jesus depicted as a donkey, Jesus as a crucified pregnant woman and even an image representing evolution. One section of the exhibit titled “The Face of Jesus in Every Person,” includes images of Martin Luther King Jr., Mother Teresa, St. Francis and a mirror reflecting visitors.

What kind of church is Broadway? According to its statement, “Broadway is an inclusive, theologically progressive, healing community focused on the spiritual transformation that comes from following Jesus Christ.”

In the video below, Smith introduces us to the “Faces of Jesus” exhibit through a personal tour and preview of several images. The photo slideshow displays a few featured images.

The post Video and photo slideshow: The many faces of Jesus appeared first on Religion News Service.

Sally Morrow joined Religion News Service in March 2012 as Photo/Multimedia Editor. She is a photographer and editor based in Kansas City, Mo. Morrow has worked as a multimedia editor and photographer at Newsday, The Des Moines Register, and the South Florida Sun-Sentinel.