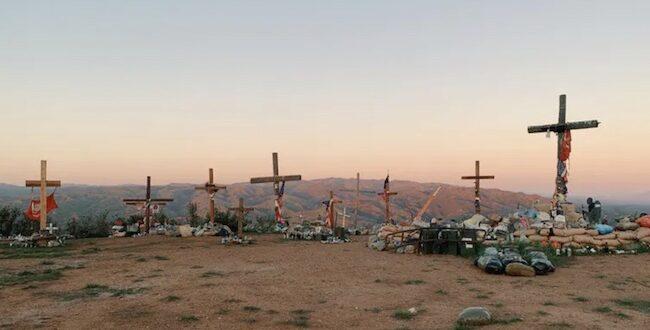 Crosses in honor of fallen Marines stand atop a hill near Camp Pendleton, California. Katrina Finkelstein, CC BY

The Conversation 3 weeks ago Commentary Leave a comment 399 Views

On Veterans Day, people across America will thank veterans and active-duty military personnel for their service.

But many members of the public don’t have a clear understanding of what service means to people in the military. How do they honor their own? What kind of spaces and activities help them reflect and remember – beyond one day a year?

We are cultural geographers who study how people’s emotions and connections with the past are represented physically in landscapes. Recently, our research has focused on commemorative place names in the military – particularly names associated with the Confederacy, which the U.S. armed forces are now reviewing and renaming.

Early this year, one of us (Katrina Finkelstein) visited Camp Pendleton in California to research commemoration on Marine Corps bases and understand how active-duty Marines and veterans interact with those spaces. In addition to official memorials and monuments sanctioned by the military, there are more informal and intimate examples of commemoration.

These ongoing, “living” memorials can be especially meaningful for service members processing their experiences and remembering those they lost, and physically represent the emotional weight they carry every day.

Camp Pendleton, one of the U.S. Marines’ busiest bases, sits between San Diego and Los Angeles on miles of undeveloped coastline.

Thirteen hundred feet above the base, more than 30 crosses stand on a hillside – a memorial site established in 2003. Before deployment to Iraq, a group of seven service members – two Marine officers, two enlisted Marines, two Navy corpsmen and one Navy chaplain – carried a cross made of an old telephone pole up to the site. It was an effort to remember a peer they lost and to prepare for the mission ahead of them. Three of the seven were later killed in action.

Today, the hilltop is still used for physical training and events before and after deployments. Meanwhile, its informal commemorations have expanded and changed, as many active-duty military and veterans develop a relationship with the space.

Destroyed in a fire in 2007, the original cross was replaced, and dozens of others added. Some are more intentionally constructed, engraved and carried up the steep hillside, while others might have been made from sticks on the way.

Contributing to the memorials has become an ongoing tradition. In August 2021, for example, after 13 service members were killed in a blast at Kabul airport – including nine Marines and one sailor based at Pendleton – new crosses appeared on the hillside. Others were erected at different Marine Corps bases, echoing the spontaneous way the first Camp Pendleton cross was installed.

This living memorial receives frequent attention, despite its isolated location and despite several official memorials throughout the base.

In an oral history interview, one of the original cross bearers from 2003, chaplain Scott Radetski, attributes the site’s popularity to the “life” that exists on the hilltop. Because of its more intimate nature — secluded from the public and requiring an hourlong hike to visit — it has become especially meaningful for service members. The crosses are not a public memorial, he said, but “a warrior memorial.”

On the journey to the Pendleton crosses, people carry mementos to leave at the top. At first, they were small rocks, but have evolved to include sandbags, combat knives, insignia, unopened beer and liquor bottles, and helmets, all piled at the base of the crosses.

At times, officials have moved to tidy it up, such as removing cans of alcohol. But some service members have objected, stressing that these items are deeply meaningful and carefully chosen. For them, these items they’ve carried to the top of the hill represent not only their comrades, but the emotional weight that veterans carry each day because of their experiences.

“Those mementos represented that suffering, that pain, that loss, that anguish, that angst, whatever it was” that service members needed to leave behind, Radetski said. The site is not always clean and neat, but he suggests it reflects the messiness of war and the traumatic experiences of the veterans who visit the site regularly.

In October 2021, before the battalion that sustained most of the losses at the Kabul airport returned to Camp Pendleton, the group Recycle for Veterans, which brings veterans together for cleanups on the West Coast, held an event to provide maintenance of the site. The group removed debris and empty bottles, but left mementos behind, leaving it ready for more commemorations in the future.

While many memorial landscapes can seem “fixed”, representing a single moment or individual, the crosses at Camp Pendleton show that such spaces can actually change. The crosses reaffirm the idea that public memories are not static, and neither are spaces dedicated to them; new features are added as others are removed.

The crosses are not without controversy. A decade ago, after the Los Angeles Times ran a story about the memorial on Veterans Day, the Military Association of Atheists and Freethinkers filed a complaint, arguing that their presence relegated “all non-Christians who have fought and died for our country […] to second-class citizenship.” Base officials reportedly conducted a review, and the memorial still stands.

For Marines who support the memorial, however, the site can serve multiple purposes: a destination during physical training, a way to prepare for a deployment, or a journey to come to terms with their experiences upon returning home.

Often, these activities are collective. Veterans organize semiannual hikes, meaning that the site does not become obsolete or forgotten. As the site of an ever-expanding memorial, the hillside is an example of how veterans continue to return to their own community, to a place that Chaplain Radetski called a “common ground,” for remembrance and healing.

This year is thus the 400th anniversary of what became heralded as the First Thanksgiving.