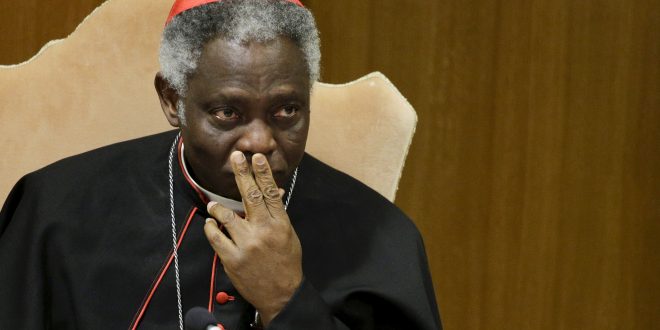 FILE PHOTO: Cardinal Peter Turkson attends a news conference for the presentation of Pope Francis' new encyclical titled "Laudato Si (Be Praised), On the Care of Our Common Home", at the Vatican June 18, 2015. REUTERS/Max Rossi -

ROME (Reuters) – The Vatican urged U.S. President Donald Trump to listen to “dissenting voices” and reconsider his position on climate change on Thursday, saying the United States risked being supplanted by China as leader in environmental protection.

Pope Francis has made defense of the environment a key plank of his papacy, strongly backing scientific opinion that global warming is caused mostly by human activity.

“This is a challenge for us,” said Cardinal Peter Turkson, the pope’s point man for the environmental, immigration and development, when asked about Trump’s executive order dismantling Obama-era climate change regulations and his immigration policies.

“Fortunately, in the United States, there are dissenting voices, people who are against Trump’s positions,” said Turkson, who is from Ghana and was one of the driving forces behind the pope’s 2015 encyclical letter on environmental protection.

“This, for us, is a sign that little by little, other positions and political voices will emerge and so we hope that Trump himself will reconsider some of his decisions,” Turkson told reporters at a breakfast meeting.

The pope and the Vatican, which has diplomatic relations with more than 180 countries and a permanent observer status at the United Nations, have strongly backed the international Paris Agreement in 2015 to curb world temperatures.

“We as a Church, are full of hope that (Trump’s positions) will change,” Turkson said.

After Trump signed his executive order on Tuesday, keeping a campaign promise to bolster the U.S. coal industry, nations led by China and the European Union rallied to support the Paris accord, which Trump has threatened to abandon.

China, which had fought attempts by foreign governments to limit carbon emissions in the past, has become a strong proponent of efforts to halt global warming.

“While Trump is moving in the opposite direction, there is another great power in the world, China, which is showing different signs, as if America is creating a vacuum that China is filling,” Turkson said.

He said the Vatican hoped that positions by China, which is investing heavily in the export of clean energy products such as solar panels and wind turbines, “would provoke a re-consideration of the positions of some countries, in this case the United States.”

The Vatican was also “very worried” that the U.S. budget, released on March 16, increased military spending at the expense of environmental protection, diplomacy and foreign aid, he added.

Previous Post-factual, pre-factual and truth
Next An Eastern Orthodox View on Truth