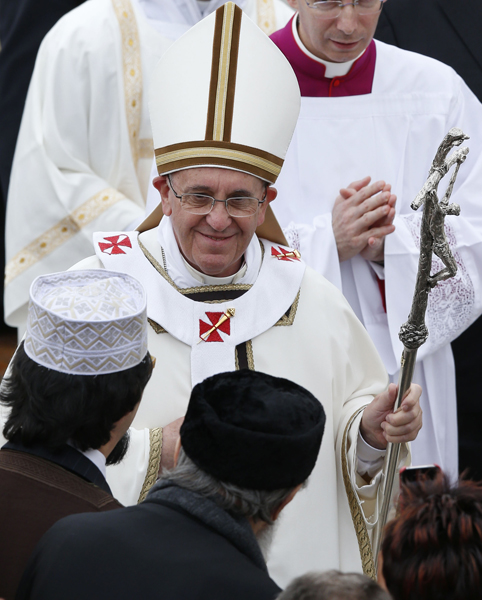 Vatican seeks input from the pews on marriage and family issues

(RNS) In an unusual move, the Vatican has asked the world’s bishops to quickly canvas the faithful for their views on topics like gay marriage, divorce and birth control ahead of a major meeting of church leaders set for next fall.

Pope Francis carries his crosier after celebrating Mass in the piazza outside the Basilica of St. Francis in Assisi, Italy, Oct. 4. The pontiff was making his first pilgrimage as pope to the birthplace of his papal namesake. Photo by Paul Haring/Catholic News Service

But it’s not clear how or whether the American bishops will undertake such an effort, or if they will only send their own views to Rome.

The letter from the Vatican to New York Cardinal Timothy Dolan, president of the U.S. Conference of Catholic Bishops, was dated Oct. 18 and it asked that a series of questions be shared “immediately as widely as possible to deaneries and parishes so that input from local sources can be received” in time for a February planning meeting in Rome.

That meeting is to help set priorities for the October 2014 synod — as the meeting of top church leaders is called — on family life.

The letter was sent via email to the rest of the U.S. bishops on Wednesday (Oct. 30). National Catholic Reporter first reported the story on Thursday, and included copies of the documents.

An accompanying note to the bishops from Monsignor Ronny Jenkins, the chief administrator at the USCCB headquarters in Washington, says the Vatican “requests the observations of the members of the Conference” — the bishops — but does not mention the kind of broader consultation that the Vatican asks for.

The bishops in England and Wales, by contrast, already have an online survey form up and running and have asked every diocese, parish, Catholic organization, and individual Catholic for feedback. The British bishops also printed the nine sets of topics and 39 questions from the Vatican in a nationally circulated Catholic newspaper.

“Your participation is important,” Archbishop Vincent Nichols of Westminster, president of the hierarchy in England and Wales, said in a message encouraging Catholics to respond.

In the U.S., on the other hand, “it will be up to each bishop to determine what would be the most useful way of gathering information to provide to Rome,” a spokeswoman for the USCCB said Friday.

“We pass on to bishops what is sent to us. They then take care of the local consultation and send the data back to us. We transmit it to the Holy See,” said Helen Osman, head of communications for the American hierarchy.

Still, some American bishops privately expressed frustration that they had not been notified sooner about the Vatican request and that there was as yet no national plan for soliciting input from U.S. Catholics.

In preparing for past synods, Rome has asked bishops to discuss the issues with their flocks and provide feedback. But bishops say it was largely a pro forma request often carried out in a perfunctory manner.

The synod meetings, which were begun years ago as a way to improve churchwide consultation, have turned into ponderous, unwieldy affairs that generally rubber-stamp pre-set conclusions. As blogger Rocco Palmo put it, for participating bishops “the greatest benefit of the experience has been a healthy amount of nap-time during the sessions.”

But Francis and his top aides have said that they want to overhaul the synod to turn it into a truly consultative meeting that will be shorter in duration — two weeks instead of nearly a month — and encourage debate and input from all Catholics.

Next October’s meeting will be the first major test for Francis’ pledge to develop a more “horizontal” church.

Just as notable are the questions the Vatican is asking: Rome wants to know how churches are reaching out to divorced and remarried couples, to cohabitating couples, and to gay couples and their children. The document also asks whether the church’s ban on artificial birth control is accepted and if not, why not.

The Vatican also has requested detailed statistics on the makeup of families in each diocese, including the percentage of couples who are divorced and remarried — a topic that Francis has spoken about in terms that have prompted widespread speculation about potential changes in church teachings or practices.

As the document says, “vast expectations exist concerning the decisions which are to be made pastorally regarding the family.”

The post Vatican seeks input from the pews on marriage and family issues appeared first on Religion News Service.

Previous The ethical, spiritual side of I-522
Next Millwood pastor keeps his faith despite lymphoma diagnosis