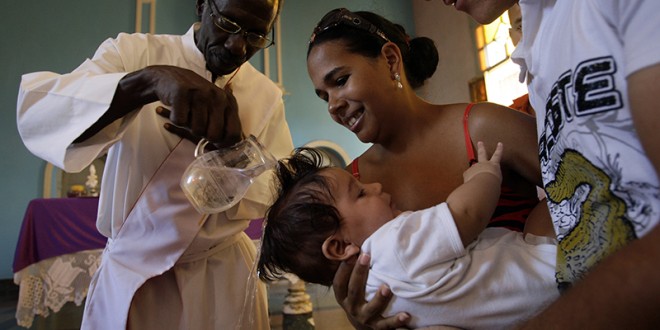 A child is baptized at a Catholic church in Havana on March 18, 2012. Photo courtesy of REUTERS/Stringer *Editors: This photo may only be republished with RNS-VATICAN-GODFATHER, originally transmitted on September 3, 2015.

VATICAN CITY (RNS) The Vatican has rejected a request by a transgender man in Spain to become a godparent, ruling that his sexual identity means he is incapable of carrying out the task.

Alex Salinas was asked by his family to be godfather to his nephew, but the bishop of his local diocese on Spain’s southern coast questioned his gender identity.

Salinas was born a woman but has since undergone hormone therapy and has a male ID in Spain. He is now waiting for gender surgery, The Local Spain reported.

Bishop Rafael Zornoza Boy of Cadiz and Ceuta rejected the family’s request to name Salinas as a godfather. Then, after a media storm, the bishop wrote to the Vatican for advice.

In a statement Tuesday (Sept. 1), the bishop said he turned to the Vatican due to “confusion among some of the faithful” and “the complexity and media attention garnered by this issue.”

It said transsexual behavior “reveals in a public way an attitude opposite to the moral imperative of solving the problem of sexual identity according to the truth of one’s own sexuality.”

The statement from the Congregation for the Doctrine of the Faith, responsible for enforcing Catholic doctrine, concluded: “It is clear that this person does not meet the requirement of carrying out a life conforming to the faith and the position of godfather.”

It also said the decision was not intended to be discriminatory.

In commenting on the decision, Zornoza noted that Pope Francis had addressed gender issues in his encyclical on the environment. While not referring to transgender people specifically, the pope wrote: “The acceptance of our bodies as God’s gift is vital for welcoming and accepting the entire world as a gift from the Father and our common home.”

Still, the pope has welcomed transgender people with symbolic gestures.

In January, Francis met with a transgender Spaniard at the Vatican.

In March, transgender prisoners near Napes, Italy, were invited to lunch with Francis.

And on Tuesday, Francis met privately with renegade French Bishop Jacques Gaillot at the pope’s Vatican residence. Gaillot, who was sidelined by Pope John Paul II, has welcomed and blessed LGBT people. His visit with Francis was a sign the pope wants to reach out to people on the margins.

Previous Coming together in a prayer for rain
Next Coffee Talk Saturday: Transparency In Religious Organizations