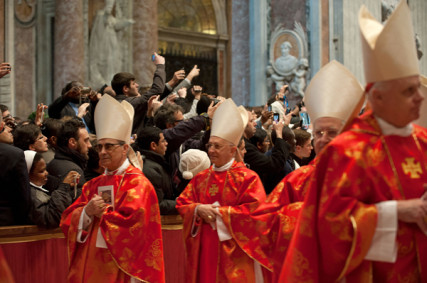 ROME (RNS) The Vatican on Monday (Nov. 4) moved to quash speculation that at least two women would be among the cardinals that Pope Francis will name in February, saying such a move was “not a realistic possibility.”

Over the weekend, Irish media reported that Francis could name Linda Hogan and Mary McAleese as cardinals. Both are associated with Trinity College in Dublin: Hogan as a professor of ecumenism, and McAleese , the former president of Ireland, as a former professor.

Some Italian media that carried the story speculated that Cecile Kyenge, the Congo-born Italian minister of integration, could be a candidate as well. Kyenge is a devout Catholic and a graduate of the Catholic University of the Sacred Heart in Milan.

Francis has made many unexpected moves since becoming pope in March, and has established himself as an advocate of women in the church, telling “America” magazine two months ago that “the church cannot be itself without women” and saying that from a theological perspective, “Mary is more important than the bishops.”

But a move to name a female cardinal would be unprecedented for a church that does not allow women to serve as deacons, priests or bishops.

The Vatican’s chief spokesman, the Rev. Federico Lombardi, did his best to stifle the speculation, calling the notion “nonsense.” He added: “It is simply not a realistic possibility that the pope will name female cardinals for the consistory in February.”

He conceded, however, that such a move was “theologically and theoretically” possible.

“Being a cardinal is one of the roles in the church for which, in theory, one does not have to be ordained as a priest,” Lombardi said. “But to move from that point to suggesting the pope will name female cardinals for the consistory is not even remotely realistic.”