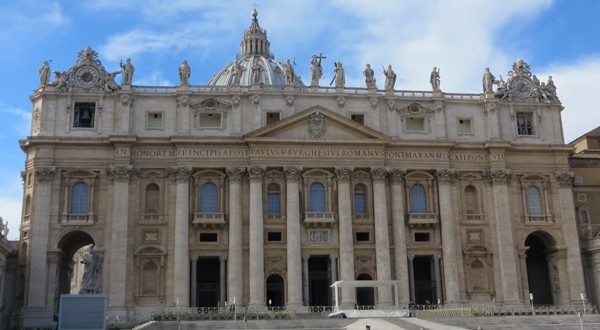 St. Peter’s Basilica at the Vatican in Rome in February 2014. RNS photo by David Gibson

Vatican debate on gays provokes strong reaction from all corners

VATICAN CITY (RNS) From questions of welcoming a gay son home for Christmas to denying the sacraments for the children of gay and lesbian parents, an ongoing debate on the Catholic Church’s approach to homosexuality has raised the hopes of some LGBT advocates and provoked the ire of the church’s right wing.

At the two-week Synod on the Family convened by Pope Francis here, the issue of homosexuality is competing for air time with similar questions of denying Communion to divorced and remarried Catholics or how to respond to couples that live together outside of marriage.

But with a rapidly shifting legal landscape, and a pope who famously asked “Who am I to judge?”, the debate over homosexuality is eliciting personal and charged reactions from all corners of the church.

The controversial debate was unwittingly fired up by Australians Ron and Mavis Pirola, the parents of four and delegates to the church family summit.

The Sydney couple told nearly 200 bishops about friends who had invited their gay son and his partner home for Christmas.

“They fully believed in the church’s teachings and they knew their grandchildren would see them welcome the son and his partner into the family,” the couple told those assembled in the Vatican’s Paul VI hall. “Their response could be summed up in three words: ‘He’s our son.’”

American hard-liner Cardinal Raymond Burke shot back on Thursday (Oct. 9) that children should be protected from “exposure” to gay relationships, which he rejected as “evil.”

“If it were another kind of relationship — something that was profoundly disordered and harmful — we wouldn’t expose our children to that relationship, to the direct experience of it,” Burke, who oversees the Vatican court system, told LifeSiteNews.

“And neither should we do it in the context of a family member who not only suffers from same-sex attraction, but who has chosen to live out that attraction, to act upon it, committing acts which are always and everywhere wrong, evil.”

But that’s exactly the approach that sends gay and lesbian Catholics — and members of their extended families — running away from the church, said Marianne Duddy-Burke, executive director of the largest Catholic gay and lesbian rights group, DignityUSA.

“It is clear this ‘love the sinner’ but ‘hate the sin’ approach does not work,” she said from Boston. “It is inappropriate in dealing with gay people.”

In a Vatican briefing Friday, church leaders said the bishops and other delegates were considering the children who bear the “heavy burdens” caused by divorce or other “irregular situations” — code words for nontraditional families headed by unmarried parents, or gay and lesbian parents.

The synod has also been discussing ways of offering the sacraments to the children of gay couples, something Duddy-Burke said has been used as a “political weapon.” Though not widespread, some gay Catholics have reported obstacles in seeking baptism for their children, or enrolling them in Catholic schools.

“It is absolutely wrong for the church to use its sacraments as a political weapon,” she said. “It is happening with baptisms, weddings and funerals. I have two kids. Our kids should be full members of the church like their parents.”

Francis has said the church must be more compassionate toward the gay community, although he has never argued for changing church teaching that homosexuality is “objectively disordered” or suddenly moved to allow gay marriage.

Nonetheless, the change in tone that Francis has called for — and which seems to be finding support at the synod — has given LGBT advocates reason for hope.

“People are angry that the bishops take the side of discrimination rather than equality,” said Francis DeBernardo, executive director of Maryland-based New Ways Ministry, a gay Catholic group that has long been at odds with the American hierarchy.

“(But) they think Francis sees them as brothers and sisters. They don’t feel they are outsiders anymore. Francis has changed the language, and in this synod we are seeing bishops calling for change in pastoral practice.”

The Rev. James Martin, a Jesuit priest at America magazine and author of “Jesus: A Pilgrimage,” said he, too, is encouraged.

“It is a huge step forward that the synod is hearing from people speaking warmly about LGBT people. And it’s a big step that many bishops now advocate a more pastoral stance to the community,” he said from New York. “Even better would be if the bishops heard from an LGBT person sharing his or her own experiences of being Catholic.”