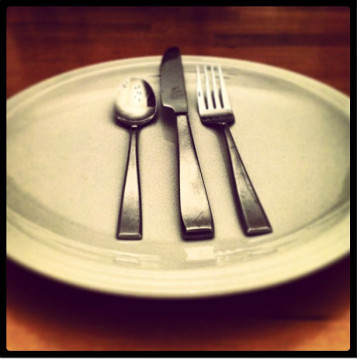 An empty plate, with silverware. FAVS stock image by Kellie Moore, via Instagram.

The ups and downs of fasting, from a Baha’is perspective

As I write this, Baha’is worldwide are in the home stretch of the annual Fast proscribed by the faith.

In regards to the Fast, the Kitab-i-Aqdas indicates that Baha’is are to abstain from food and drink from sunrise to sunset during the Baha’i month of Ala (which translates into English as “Loftiness”), the 19-day period from the end of the Festival of Ayyam-i-Ha until the Festival of Naw Ruz, which also roughly coincides with Spring Equinox.

In the Gregorian calendar, this is from sunrise on March 2, until sunset on March 20.  Abdu’l-Baha describes the annual Fast as “conducive to the spiritual development of the individual.”

Shoghi Effendi, Guardian of the Faith, describes the annual Fast, along with reciting of one of three obligatory prayers, as constituting “the two pillars that sustain the revealed Law of God. They act as stimulants to the soul, strengthen, revive and purify it, and thus insure its steady development.”  The Fast is obligatory for Baha’is from the ages of 15 to 70, although dispensations are allowed for health, occupation, and for travelers.

I thought I’d share an assortment of thoughts, observations, and anecdotes I’ve had pertaining to the Fast; some serious, some (I hope) humorous, and a few somewhere in between.

Personally, I’ve found that I get hungry based on time of day, regardless of whether or not I eat. Therefore, the Fast serves as a reminder that I can get by on far less food than I normally take in. That having been said, few things are more satisfying as the first bite of food after a day of Fasting!

The hardest thing about the Fast for me hasn’t been forgoing food and drink. It has been resisting the impulse to sample food while I cook.

Well, look at that! I finally made it past the weight loss plateau I’ve been struggling with!

During one of the meals I was preparing, only my daughter (who is too young to fast) and I were home. One of the ingredients I had on-hand was of questionable quality. Ethical dilemma! If I just throw it out, I’ve wasted food – and one does not waste food, especially during the Fast. If I just throw it in, I could be feeding everyone bad food. If I taste a wee bit to see if it has actually gone bad, then I’ve broken the Fast. What do I do?!?

In order to occupy itself, an idle mind focuses on hunger and thirst, and counts the seconds until sunset. But if I’m engrossed with something, there have been times where I’ve missed time to break the Fast.

Aw, man! Why did the company have to cater barbecue for lunch?!?

A symptom of hunger is light-headedness and difficulty concentrating. If my kids ask me for something while I’m distracted or otherwise unable to concentrate fully on their question, my answer is automatically “no.” So my kids have learned that mid-afternoons and early evenings in March are terrible times to ask me for anything.

I’m grateful for every bite of food. Every. Single. Bite!

I’m reminded of an outing with my mother and one of my nephews (neither of whom are Baha’i, BTW). At one point, he complained about it almost being lunchtime by saying “I’m starving!” In a heartbeat, my mother’s demeanor shifted from her normal jovial expression to deadly serious. “You are not starving,” she told him sternly, “you’re just hungry.” I feel very fortunate that I’m going without food and drink by choice, and relief from hunger and thirst is only as far away as the next sunset.

All in all, I also wonder also if faithful of other religions have had similar experiences while observing the Fast as proscribed in their own Scriptures. I’d love to hear from you!

Previous POLL: Should the 10 Commandments monument be removed from a Sandpoint City Park?
Next Mercy for Fred Phelps